How to calculate Atmospheric Pressure?

The atmospheric pressure at a point is equal to the weight of the column of air of unit cross-sectional area extending from that point to the top of the atmosphere.

In simple words, it is the force exerted on a surface by the air. The value of atmospheric pressure is 1.013 × 105 Pascal at sea level.

Some major units for measuring atmospheric pressure are as follows:

Devices to Measure the Atmospheric Pressure

Atmospheric pressure plays a vital role in determining the weather conditions and water chemistry etc. A rapid drop in the atmospheric pressure indicates a low-pressure system, this low-pressure system is mainly associated with rainy, cloudy weather. Whereas a rapid increase in the atmosphere pressure indicates clear sky and dry weather.

An Italian scientist E. Torricelli was the first to devise a method for measuring atmospheric pressure accurately. Mercury Barometer is a simple instrument used to measure the atmospheric pressure at a point. It is a 1 m long glass tube, closed at one end is filled with clean and dry mercury. After closing the end of the tube with the thumb, the tube is inserted into a dish of mercury. As the thumb is removed, the mercury level in the tube falls down a little and comes to rest at a vertical height of 76 cm above the mercury level in the dish.

When it is then inverted over a trough containing mercury. Mercury in the tube slides down, till it becomes stable at a level. Due to this, the level of mercury rises in the trough. When the level of mercury become stable in the tube, we say, that the pressure exerted by mercury is the same as the atmospheric pressure. Let’s understand this with an example discussed below: 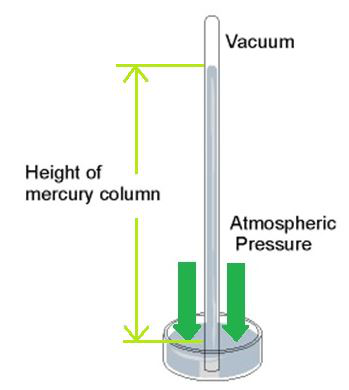 where Pa is the atmospheric pressure.

But according to the expression for absolute pressure,

where ρ is the density of mercury, h is the height of mercury and PA is the pressure at the region above mercury inside the tube (= 0).

Therefore, 76 cm of mercury in a mercury barometer corresponds to the atmospheric pressure is equivalent to 1 atmosphere.

An open-tube manometer is an instrument used for measuring pressure differences, or to measure the pressure of gas enclosed in a vessel. It consists of a U-shaped tube open at both ends. A liquid of density ρ is filled in the tube. One end of the tube is left open to the atmosphere and the other end is connected to the system whose pressure is to be measured. 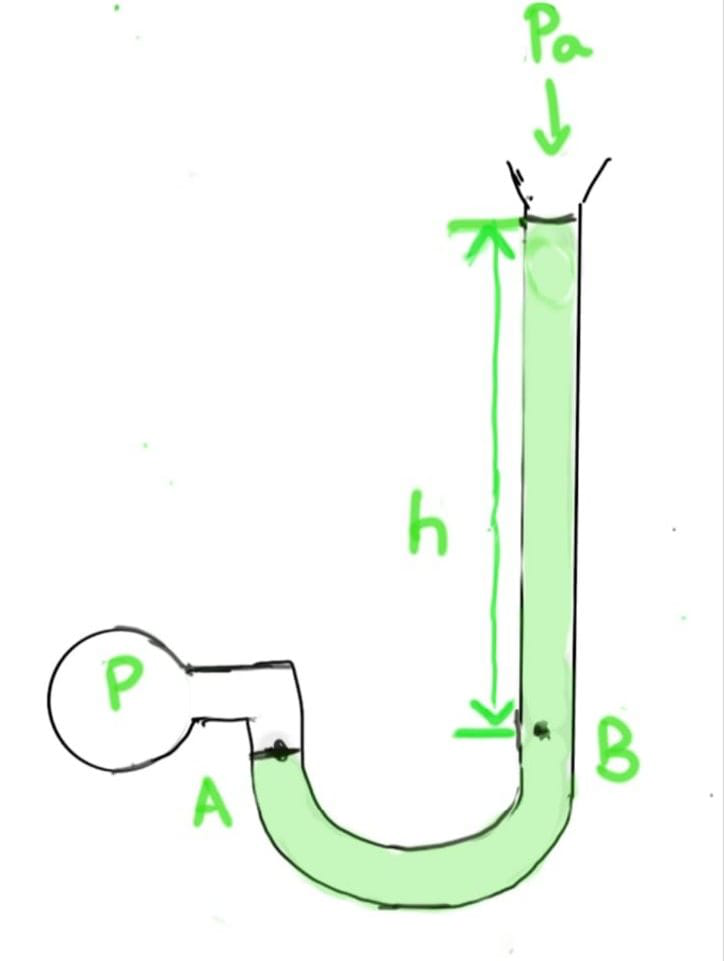 Let P be the pressure of the enclosed sample, and Pa be the atmospheric pressure. The liquid level in the open limb of the U-tube rises as compared to other limbs joined to the system, let the difference between the liquid levels of the two limbs be h and density of the liquid be ρ. The liquid in the U-tube rests at different levels in the two arms.

Let us consider two points A and B lying at the same horizontal level then according to the Pascal Law pressure PA and PB at the respective points should be the same.

Hydraulic machines mainly work on the principle of Pascal’s law which clearly states that the pressure on an enclosed fluid is uniform in all its directions. And the force on the fluid is given by the multiplication of pressure and area of cross-section. These hydraulic machines use fluid power to perform their work. The hydraulic fluid is pumped to hydraulic cylinders and hydraulic motors.

Whenever an external pressure is applied on a liquid at rest it is transferred and diminished to all parts of the liquid and also to the walls of the vessel containing the liquid this is Pascal’s law for transmission of fluid pressure. Let’s understand this with an example discussed below: 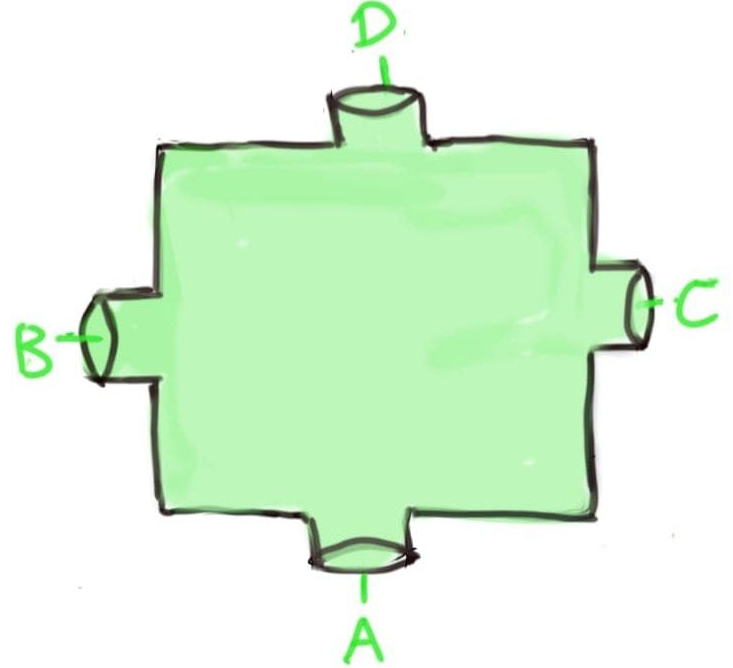 When the piston at A is pushed in with a force F, it exerts a pressure P = F/a on the enclosed fluid. It is found that we require the same force F on each piston B, C and D to keep them from moving.

Thus, it proves that the external pressure applied to enclose fluid is transferred to all points undiminished.

Hydraulic Lift is mainly used to lift loads by applying a force of lesser magnitude. A simple hydraulic lift consists of two cylinders 1 and 2 of different cross-section areas A1 and A2 connected together with the horizontal pipe. Two cylinders are provided with frictionless airtight pistons. An incompressible oil is filled in the cylinders.

One piston has a smaller area of cross-section than the other. Suppose we push piston 1 down with a force F1. Therefore the pressure exerted in this piston is,

Now according to Pascal’s law, this change in pressure is transferred undiminished to the other piston P2.

Thus, force F2 experienced by piston 2 is greater than the applied force F1, by the factor A2/A1. 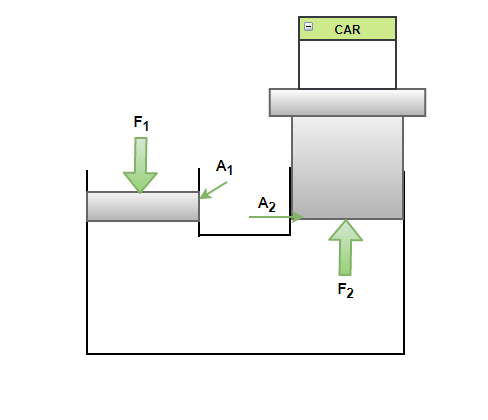 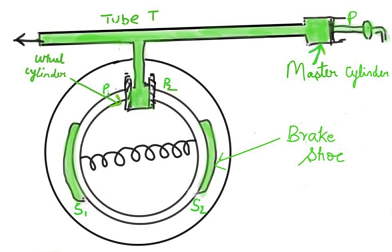 When a little force is applied on the pedal with the foot, the master piston moves inside. The pressure thus transmitted is transferred undiminished to the other pistons P1 and P2 which are directly connected to the wheels. These pistons are of larger cross-sections as compared to the master piston P.

Applying Pascal’s law, a large force acts on these pistons that move out and expand the brake shoes. Thus, the braking force produced at the wheels is quite large as compared to the little force applied at the brake pedal. The breaking effort is equal in all the wheels because the pressure is transferred equally to all the pistons connected to the wheels.

Question 1: What is the pressure on a swimmer 10 m below the surface of a lake?

Pressure on the swimmer 10 m below the surface of the lake,

Question 2: The density of the atmosphere at the sea level is 1.29 kg/m3. Assume that it does not change with altitude. Then how high would the atmosphere extend? (Take g = 9.81 m/s2).

Question 3: Reading of mercury level in a barometer installed in an establishment in the hilly terrain on a day was found to be 732 mm. Find the value of atmospheric pressure at the place. Given that density of mercury is 13.6*103 kg m-3 and g =9.8 m s-2

Atmospheric pressure at the place,

Mechanical advantage at the larger piston is a2/a1

This is the force exerted on the larger piston. The liquids are considered incompressible. Therefore volume covered by the movement of the smaller piston inwards is equal to that moved outwards by larger piston.

So, the distance moved out by the larger piston is 0.042 cm.

When the elevator moves upwards with acceleration a.