How to Avoid ARP Poisoning?

As mentioned previously, this attack exploits the weaknesses present in the ARP protocol to corrupt the mappings that are present over the network. ARP protocol was introduced in 1982 and security was not a concern at that time. Thus, there were no authentication mechanisms devised to validate ARP messages. This way, even malicious devices can answer an ARP request. This is a major loophole in ARP protocol as it leaves a huge space for malicious users to poison the caches of other devices. If this happens, then the ARP cache would be filled with incorrect entries.

The steps of an ARP Poisoning attack can change but generally, it has the following steps:

These are the few main types of ARP poisoning attacks:

Following are the five ways of avoiding ARP Poisoning attacks: 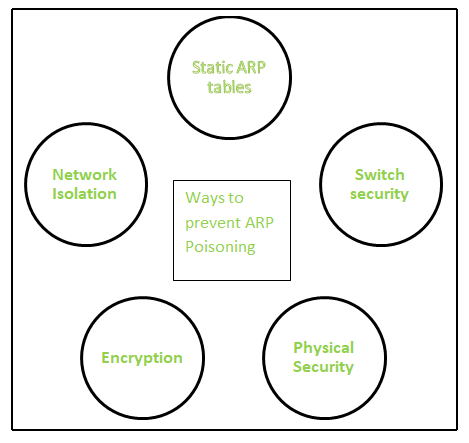 1. Static ARP Tables: Half of the problem will be solved if we can be sure of the correct mapping of MAC addresses to IP addresses. This can be done but it is heavy on the part of the administration. ARP tables keep a record of all the mappings and any network change is updated in these tables manually. Now, manually updating ARP tables for all hosts is not feasible for organizations.

2. Switch Security: Most Ethernet switches have features that can help mitigate ARP Poisoning attacks. These features are also known as Dynamic ARP Inspection(DAI) and help in validating the ARP messages and drop packets that show any kind of malicious activity. This also allows one to limit the rate at which ARP messages can pass through the switch.

DAI and other such features are now not only available on high-end networking gear but also on all business-grade switches. Usually, DAI is enabled on all ports but the ones connected to other switches. Port security on a switch helps in reducing ARP Cache Poisoning attacks. While using port security, there is no chance that an attacker may take multiple identities over the network. This is because, using port security, a single MAC address can be configured on a switch port.

3. Physical Security: A very simple way to mitigate ARP Poisoning attacks is to control the physical space of your business. Routing of ARP messages takes place only within a local network. Thus, probable attackers are in physical proximity to the network of the victim. Also, in the case of wireless systems, an attacker might be present in a street or a parking lot. The use of technologies like 802.1x can help in removing any threats to the devices and the network.

4. Network Isolation: Since ARP messages don’t have a scope greater than the local subnet, a well-segmented network is better than a normal network. This way, even if the attack occurs, a part of the network will only be affected and the other parts will be safe. Attack in one subnet does not impact the devices in any other subnet. Thus, important resources can be placed in a dedicated segment with high security.

5. Encryption: Encryption does not help in preventing ARP Poisoning, however, it does help in mitigating the damage that might occur in case of attacks. As in the case of MiTM attacks, login credentials are stolen from the network. However, with technologies like SSL and TLS, data in the encrypted form might get stolen but it can be read by the attacker, rendering it of no use to the attacker.