Spanning tree protocol is a type of communication protocol that functions to build a loop-free topology, which means the arrangement of elements in a computer network.  STP commonly works for layer-2 bridges and switches. It also provides a backup link for the network system if the active link fails. Layer-2 devices send the data in the form of frames.

STP enables a single port of a node and disables all other ports. It means that it allows only one active path for transmission between the two nodes. The port selected by the STP is named the root port, which sends data to the root bridge. The root bridge receives all the data from different bridges.

Steps of selecting the designated port

The process to select the designated port is listed below:

Example: Consider the below switch diagram: 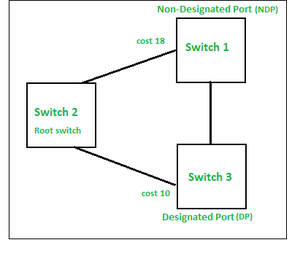 Data transfer in the above diagram will be from switch3 to switch2.