JSON web token is an efficient, secured as well mostly used method of transferring or exchanging data on the internet. Generally, it is used for authentication and authorization in applications. The workflow of the authentication is we generate the token at the server and send back it to the client which is used for further requests on the server, Now the point of discussion is how long this jwt token will be valid? that means after which duration the server will not consider the token sent by the client. Let’s first understand how a JWT token gets created.

The sign() method of the jsonwebtoken library is used for creating a token that accepts certain information as parameter objects and returns the generated token.

As we are working on a node library it is a mandatory step to create a node project, write npm init in the terminal. It will ask for a few configurations about your project which is super easy to provide.

Before going to write the JWT code we must have to install the package,

This would be our project structure after installation where node_modules contain the modules and package.json stores the description of the project. Also, we have created an app.js file to write the entire code.

There are two methods of registering the expiry of the token both are shown below with an explanation.

Approach 1: There exists a key exp in which we can provide the number of seconds since the epoch and the token will be valid till those seconds.

Approach 2: In this method, we can pass the time to expiresIn key in the options, it requires the number of seconds till the token will remain valid or the string of duration as ‘1h’,  ‘2h’, ’10m’, etc.

Step 4: Verify the token in terms of expiry duration

We have successfully generated the token now it’s time to verify whether the code is working in its intended way or not.

Output 1: Here we are checking before 10 minutes of generating token, as expected the else block of code will work.

Output 2: Here we are checking once the token is expired, the TokenExpirationError will be thrown in this case. 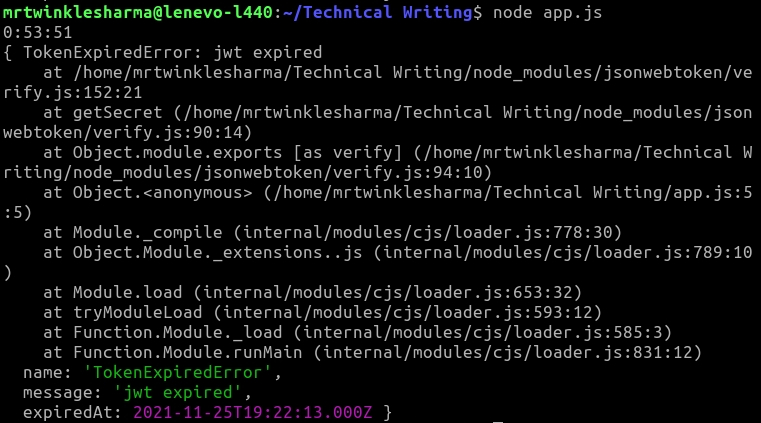 Conclusion: After seeing these two outputs and the method of creating tokens we can analyze that how the duration of the token is declared and how long it remains valid.