There are many processes are running in the background when we press the power button of the system. It is very important to learn the booting process to understand the working of any operating system. To solve the booting error it is a must to know how kernel boots. It is a very interesting topic to learn let us start with the basics. A simplified read of the boot method is given below: 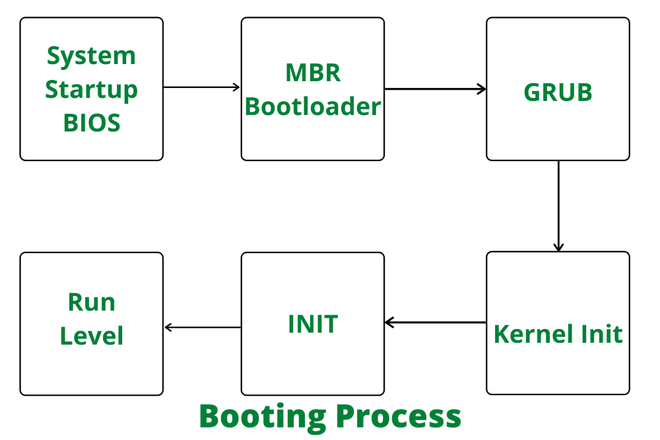 Traditional UNIX operating system systems manufacture several diagnostic messages upon boot that tell you regarding the boot method. The messages come back initially from the kernel and so from processes and low-level formatting procedures that init starts. However, these messages aren’t pretty or consistent, and in some cases, they aren’t even terribly informative. Additionally, hardware enhancements have caused the kernel to start a lot quicker than before the messages flash by therefore quickly, it may be tough to check what’s happening. As a result, most current Linux distributions do their best to cover boot medical specialty with splash screens and different varieties of filler to distract you whereas the system starts.

The first 2 steps aren’t too exceptional, however, once the kernel gets to devices, the question of dependencies arises. as an example, the disk device drivers might rely on bus support and SCSI system support. In general, you won’t need to worry regarding the dependencies, except that some necessary parts are also loadable kernel modules instead of a part of the most kernel

Bootloaders became significantly a lot of advanced since the origin of the Linux kernel, with options like command-line history and menu systems, however, a basic want has perpetually been flexibility in kernel image and parameter choice. One stunning development is that some wants have really diminished. as an example, as a result of you’ll be able to perform associate emergency or recovery boot from a USB device, you seldom need to worry about manually getting into kernel parameters or going into single-user mode. Current bootloaders supply a lot of power than ever, which may be notably handy if you’re building custom kernels or simply wish to tweak parameters.