How does the Google’s “Did you mean” Algorithm work?

When you wish to say something but miss a few characters/words, the first response that anyone gives you is “Did you mean this?“. The same is the case with Google’s search algorithms. As soon as you search for a misspelled word or term on Google, it shows you the famous “Did you mean” alternative. We are sure you have come across a such scenario at least once. But have you ever wondered how Google figures it out? How does this Google’s Did you mean algorithm work?

How does the Google “Did you mean?” Algorithm work?

Google’s Did you mean Algorithm:

Now that we have understood what is Google’s Did you mean feature, it’s time to discover the algorithm behind it. There are substantially 5 steps involved in the successful working of the Did you mean algorithm, as shown in the image below:

Google’s Did you mean Algorithm

Let us look into these steps one by one in detail.

A k-gram index maps a k-gram to a posting list of all possible vocabulary terms that contain it. In this step, the possible list of alternatives/substitutes is found using the Jaccard Distance. 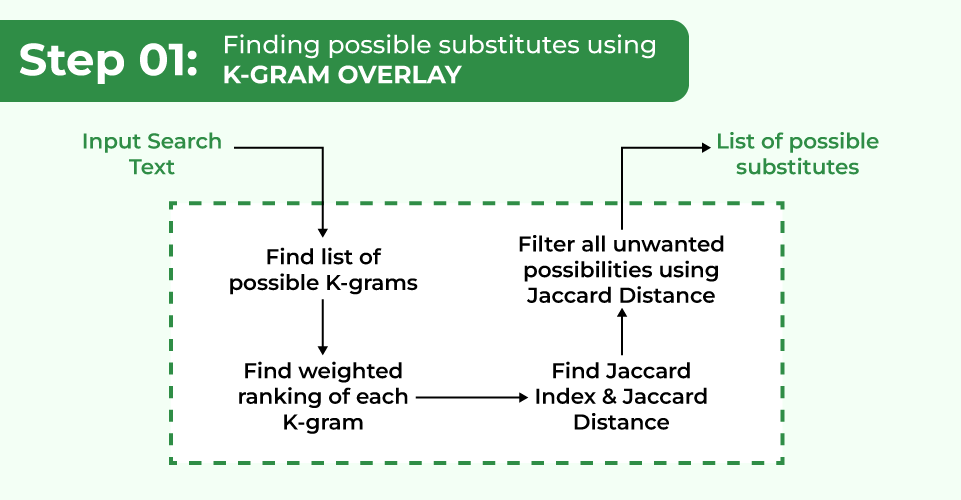 For example, the figure below shows the k-gram postings list corresponding to the bigram “ur”. It is noteworthy that the postings list is sorted alphabetically.

For input “ur”   ->  The possible posting list will contain:

The bigram of “ur”

While creating the candidate list of possible corrected words, we can use the “k-gram overlap” to find the most likely corrections.

Consider the misspelled word: “appe”. The posting lists for the bigrams contained in it are shown below. Note that these are only sample subsets of the postings lists. the actual postings list would, of course, contain thousands of words in them.

The bigrams of word “appe.

To find the k-gram overlap between two postings lists, we use the Jaccard coefficient. Here, A and B are two sets (posting lists), A for the misspelled word and B for the corrected word.

The Jaccard Distance between the two sets can be calculated by using the formula:

This suggests that “apple” is a more plausible correction. Practically, this method is used to filter out unlikely corrections.

Hence, the search results are then ranked based on a weight ranking function, and keywords with a Jaccard coefficient less than a predetermined threshold value are automatically eliminated.

Operations available in Levenshtein distance are: 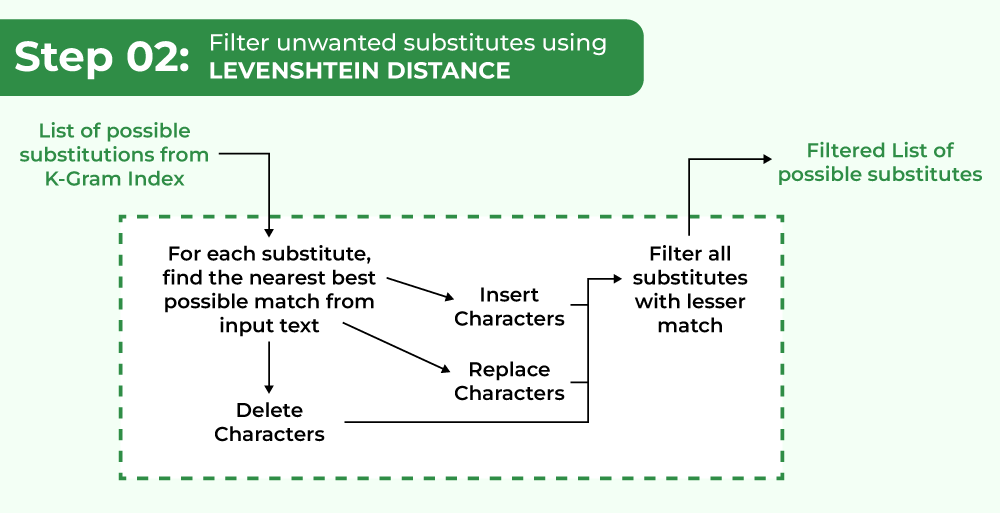 The Levenshtein distance between “kitten” and “sitting” is 3, because the only 3 edits are required to change one word into the other, and there is no way to do it with fewer than 3 edits:

Damerau came up with his automated solution after an investigation showed that over 80% of the errors were because of: 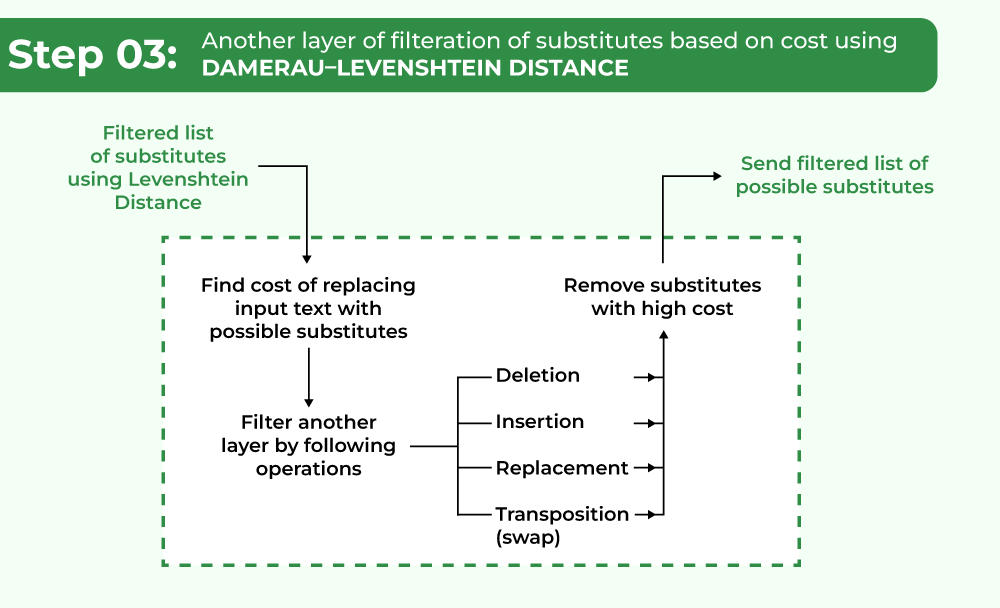 After performing the above operation on the words the cost for all four operations is calculated and the minimum cost operation is chosen.

A Hidden Markov Model can describe a situation where events occur but cannot be accurately observed. If the
relationship between the observed info and the hidden info is known, the hidden info can be deduced with some likelihood of success. This can be done to estimate hidden values or predict future hidden values. In this case, the “hidden” info is what the user meant to type, and the “observed” info is what they did type. 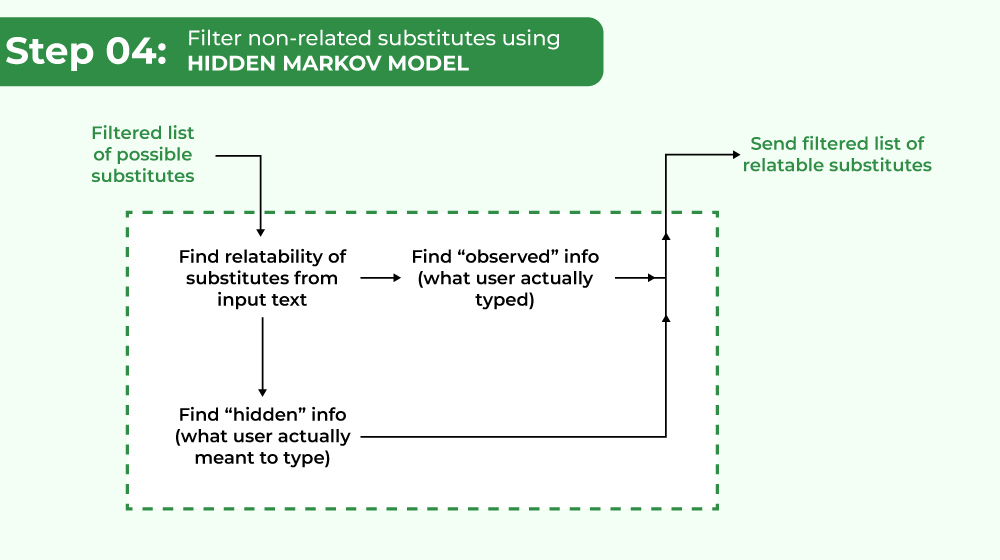 It has been recognized that a certain percentage of the time, the user will tap a neighboring key instead of the desired key. For this algorithm to succeed, the user would have to type the correct key at least 60% of the time. The algorithm works on probabilities, which give a variety of probable meanings.

5. Finding best-matched substitutes based on Probability and Statistics:

Statistics and Probability are two powerful tools. What if we can say that the likelihood of something occurring is greater than the other? Suppose we had some statics showing what I usually eat on Sunny and rainy days. If it is a sunny day, I would eat ice cream and if it is a rainy day, I would eat pudding. Based on this information, I have a higher likelihood of eating ice cream on a sunny day. 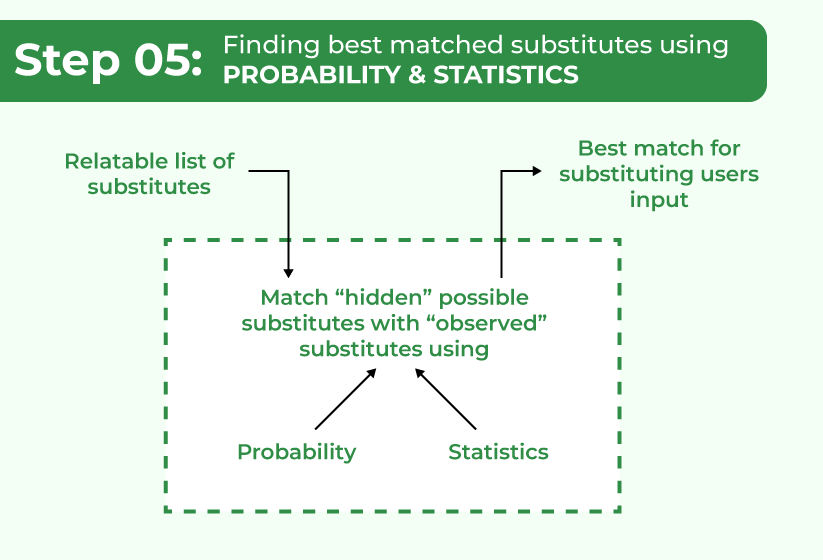 Finding best-matched substitutes based on Probability and Statistics

Similarly, The likelihood (probability) of a word’s spelling correction can be determined based on certain information (statistics). Millions of users across the globe misspell words in different languages every day, so the algorithm is programmed to find words that are misspelled in those languages. The algorithm gathers data and makes relevant guesses based on what it considers to be typical.

Previous
What is Python Used For? | 7 Practical Python Applications
Next
GATE CSE Syllabus 2023
Related Articles
1. What is WannaCry? How does WannaCry ransomware work?
2. What is a Content Distribution Network and how does it work?
3. How Does the Internet Work?
4. How Does UPI Work?
5. Mistakes You Must Avoid During Work From Home
6. If you’re not paying for a product, then you probably are the product
7. Which language should you learn first if you want to make an app?
8. 13 Things You Should Know Before You Enter In Web Development
9. Top 5 Skills You Must Know Before You Learn ReactJS
10. Introduction to Greedy Algorithm - Data Structures and Algorithm Tutorials
Article Contributed By :