Most of the computer programs/applications use logical address (IP address) to send/receive messages, however, the actual communication happens over the physical address (MAC address) i.e from layer 2 of the OSI model. So our mission is to get the destination MAC address which helps in communicating with other devices. This is where ARP comes into the picture, its functionality is to translate IP address to physical addresses. 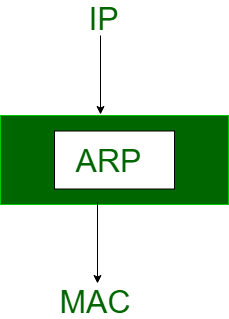 The acronym ARP stands for Address Resolution Protocol which is one of the most important protocols of the Network layer in the OSI model.
Note: ARP finds the hardware address, also known as Media Access Control (MAC) address, of a host from its known IP address.

Let’s look at how ARP works.

The above process continues till the second last network device in the path reaches the destination where it gets validated and ARP, in turn, responds with the destination MAC address.

ARP: ARP stands for (Address Resolution Protocol). It is responsible to find the hardware address of a host from a known IP address. There are three basic ARP terms.
The important terms associated with ARP are:

NOTE: An ARP request is a broadcast, and an ARP response is a Unicast.

Connect two PC, say A and B with a cross cable. Now you can see the working of ARP by typing these commands:

There will be no entry at the table because they never communicated with each other.

Now, entries of the ARP table can be seen by typing the command.
This is how ARP table looks like: