Growing up is a normal part of life. Adolescence is the stage of life when the body undergoes changes that lead to reproductive maturity. Around age 11, adolescence begins, and it lasts until 18 or 19. Adolescents are also referred to as ‘teenagers’ because this period encompasses the ‘teens’ (13 to 18 or 19 years of age). Adolescence may begin a year or two earlier in girls than in boys. Furthermore, the adolescent period differs from person to person. The human body goes through a number of changes during adolescence. These changes signal the start of puberty. The most significant change that occurs during puberty is that boys and girls become capable of reproducing. 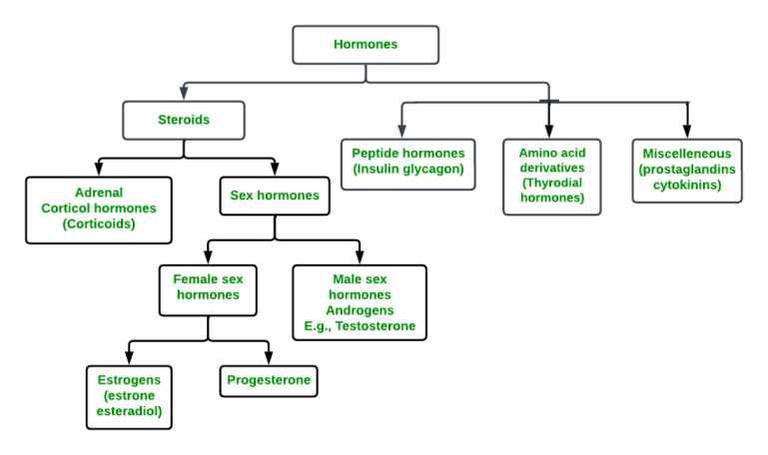 Different types of hormones are produced in the body to regulate various functions. They are organized as follows:

Hormones other than Sex Hormones

The master gland is the pituitary gland. Other glands in the body are controlled and regulated by it. Growth hormone, thyroid-stimulating hormone, LH, FSH, and other hormones are released by this gland.

Located at the base of our brain, the hypophysis, also known as the pituitary gland, is a pea-sized endocrine gland. It is known as the “Master Gland” because it produces many important hormones in the body.

It is located in the Pituitary fossa, a bony structure just below the hypothalamus and close to the optic nerve. The pituitary gland is divided into three sections, known as lobes:

The bloodstream is where hormones are released to perform their role as messengers. Blood transports them to the human body’s various organs and tissues. Hormones bind to receptors once they reach their target site. Once this process is complete, hormones send a message to an organ or tissue, causing it to perform a specific action.

FAQs on Hormones other than Sex Hormones

Question 1: Why are hormones referred to as Chemical Messengers?

Hormones plays an important role as messengers. The hypothalamus is a forebrain region that contains a large number of neurosecretory cells. These neurosecretory cells are trained to secrete a hormone known as neurohormones. They stimulate the anterior pituitary lobe to produce a variety of other hormones.

Question 3: What are the characteristics of hormones?

Question 4: What exactly are lipid-derived hormones?

Lipid-derived hormones are primarily derived from cholesterol, and their structures are similar. The most significant lipid hormones in the human body are steroid hormones, which are chemically either alcohols or ketones.

Question 5: What exactly is a thyroid gland disorder?

Many disorders and diseases can affect the thyroid gland. These issues could be caused by excessive hormone secretion, abnormal gland growth, malignant lumps, and so on.