We strongly recommend referring below post as a prerequisite of this.
Hashing | Set 1 (Introduction)
Hashing | Set 2 (Separate Chaining)

Open Addressing
Like separate chaining, open addressing is a method for handling collisions. In Open Addressing, all elements are stored in the hash table itself. So at any point, the size of the table must be greater than or equal to the total number of keys (Note that we can increase table size by copying old data if needed). This approach is also known as closed hashing. This entire procedure is based upon probing. We will understand types of probing ahead.

Delete(k): Delete operation is interesting. If we simply delete a key, then the search may fail. So slots of deleted keys are marked specially as “deleted”.
The insert can insert an item in a deleted slot, but the search doesn’t stop at a deleted slot.

Open Addressing is done in the following ways:

a) Linear Probing: In linear probing, the hash table is searched sequentially that starts from the original location of the hash. If in case the location that we get is already occupied, then we check for the next location. The function used for rehashing is as follows: rehash(key) = (n+1)%table-size. For example, the typical gap between two probes is 1 as seen in the example below.
Let hash(x) be the slot index computed using a hash function and S be the table size 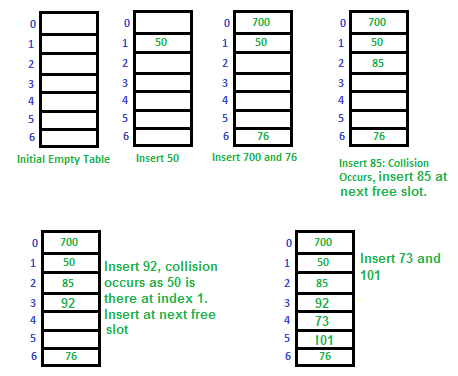 b) Quadratic Probing If you observe carefully, then you will understand that the interval between probes will increase proportionally to the hash value. Quadratic probing is a method with the help of which we can solve the problem of clustering that was discussed above.  This method is also known as mid-square method. In this method we look for i2‘th slot in i’th iteration.  We always start from the original hash location. If only the location is occupied then we check the other slots.

See this for step by step diagrams.

Comparison of above three:

Note: Cache performance of chaining is not good because when we traverse a Linked List, we are basically jumping from one node to another, all across the computer’s memory. For this reason, the CPU cannot cache the nodes which aren’t visited yet, this doesn’t help us. But with Open Addressing, data isn’t spread, so if the CPU detects that a segment of memory is constantly being accessed, it gets cached for quick access.

Performance of Open Addressing:
Like Chaining, the performance of hashing can be evaluated under the assumption that each key is equally likely to be hashed to any slot of the table (simple uniform hashing)