Happens-before is a concept, a phenomenon, or simply a set of rules that define the basis for reordering of instructions by a compiler or CPU. Happens-before is not any keyword or object in the Java language, it is simply a discipline put into place so that in a multi-threading environment the reordering of the surrounding instructions does not result in a code that produces incorrect output.

The definition might seem a bit overwhelming if this is the first time that you have come across this concept. To understand it let’s first learn where does the need for it originates from.

The Java Memory Model which is also referred to as the JMM model defines how the storage and exchange of data take place between threads and the hardware in a single or multithreaded environment.

Some points to keep in mind are as follows: 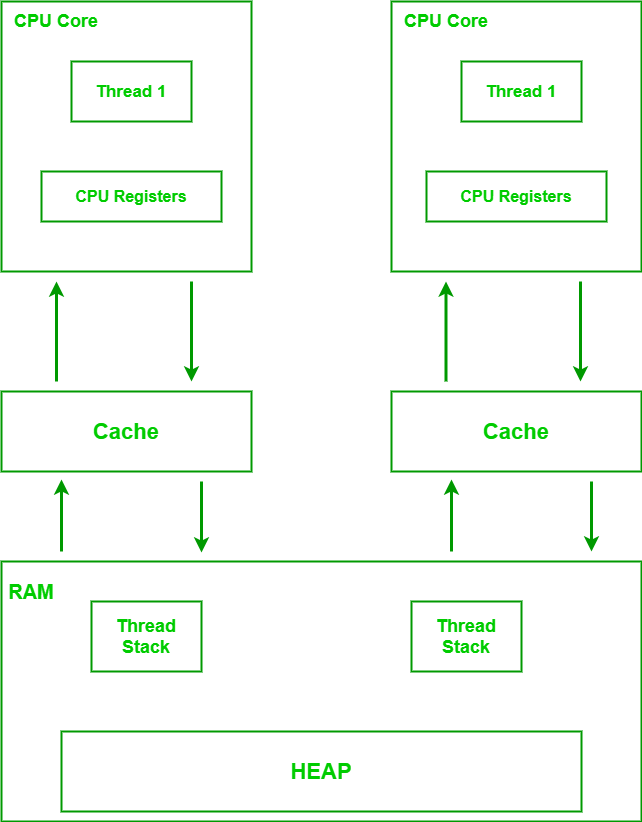 The local variables and the references to objects inside a thread are stored in the Thread Stack, whereas the objects themselves are stored inside the Heap. The request for a variable by the thread running on the CPU follows this route RAM -> Cache -> CPU Registers. Similarly, when some processing happens on the variable and its value is updated, the changes go through CPU Register -> Cache -> RAM. Thus while working with multiple threads that share a variable, when one thread updates a shared variable’s value, the update has to be done to the register, then cache, and finally the RAM. And when another thread requires to read that shared variable, it reads the value present in the RAM which travels through the cache and registers. If you look at it at the basic level, if the read-write operations are delayed in such a way that the correct value is not stored in memory before another read-write is performed then it can result in memory consistency errors.

When working with multiple threads, this procedure of storage and retrieval may pose some problems such as:

These problems are solved by the use of synchronized block and volatile variables.

During compilation or during processing, the compiler or the CPU might reorder the instructions to run them in parallel to increase throughput and performance. For example, we have 3 instructions:

However, if reordering is performed in a multi-threaded application where threads share some variables then it may cost us the correctness of our program.

Now recall the two problems we talked about in the previous section, the race condition, and the updated visibility. Java provides us with some solutions to handle these types of situations. We are gonna learn what they are, and finally happens-before will be introduced in that section.

For a field/variable declared as volatile,

There are some more important points that the volatile dictates:

This is called the visibility guarantee of a volatile variable.

All of this looks and works fine, unless the CPU decides to reorder your instructions, resulting in incorrect execution of your application. Lets understand what we mean. Consider this piece of a program:

The below code in the illustration depicts as conveyed in simpler words is as follows:

Our goal is that each time “only a freshly prepared assignment is collected. So proposing the sample code for the same as follows:

Now, the volatile variable newAssignment acts as a shared variable between Thread1 and Thread2 which are running concurrently. And since all the other variables are visible to each of the threads along with newAssignment itself, the read-write operations will be done directly using the main memory.

If we focus on the submitAssignment() method, statements 1, 2, and 3 are independent of each other, since no statement makes use of the other statement, hence your CPU might think “Why not reorder them?” for whatever reasons that it may provide better performance.  So let us assume the CPU reordered the three statements in this way:

Now think for a second, what our goal was, it was to collect a new fresh assignment each time, but now due to statement 3 updating the newAssignment to true even before the new assgn has been stored in the assgn, the while loop in the Thread2 will now be exited and there is a possibility that Thread2’s instructions execute before the remaining instructions of Thread1, resulting in an older value object of Assignment being submitted. Even though the values are being retrieved directly from the main memory, it is useless if the instructions are executed in the wrong order in this case.

Happens-Before states about reordering. It is as follows:

In context to the above example, the first point is relevant. Any write to a variable (Statements 1 and 2) that happened before a write to a volatile (Statement 3), will remain before the write to the volatile variable. This means that reordering of Statement 3 before 1 and 2 is prohibited. This in turn guarantees that newAssignment is only set to true once the new value of Assignment is assigned to ‘assgn’. This is called happens-before visibility guarantee of volatile. Also, statements 1 and 2 may be reordered among themselves as long as they are not being reordered after statement 3.

In the case of a synchronization block in Java:

In case of synchronization block, happens before states that for reordering:

Now getting deeper to the roots of the happens-before relationship in java. Let us consider a scenario to understand it in better terms.

If one action ‘x’ is visible to and ordered before another action ‘y’, then there is a happens-before relationship between the two actions indicated by hb(x, y).

Note: It is important to know that if we have hb(x, y) then it does not necessarily mean that x always occurs in the implementation before y, as long as the execution produces correct results, reordering of such actions is legal.

Some more rules laid out regarding synchronization state that are as follows: