The chemical composition of ozone constitutes three molecules of oxygen and is found in gaseous form in the earth’s atmosphere. There are two areas where the ozone gas is found in the atmosphere. One is formed naturally at a higher altitude in the stratospheric region of the atmosphere. This ozone layer has a positive impact as it shields the earth from harmful ultraviolet rays of the sun. The other ozone layer is found closer to the earth’s surface in the troposphere region which is called the ground-level ozone. It is one of the main components of air pollution on earth and has some harmful effects on people and the environment. The ground-level ozone is the major ingredient in the generation of smog that we often experience in cities and townships having a high degree of air pollution. Although the concentration of ground-level ozone is less compared to stratospheric ozone, due to its effect on human health and well-being, the ground-level ozone is termed ‘Bad Ozone‘. 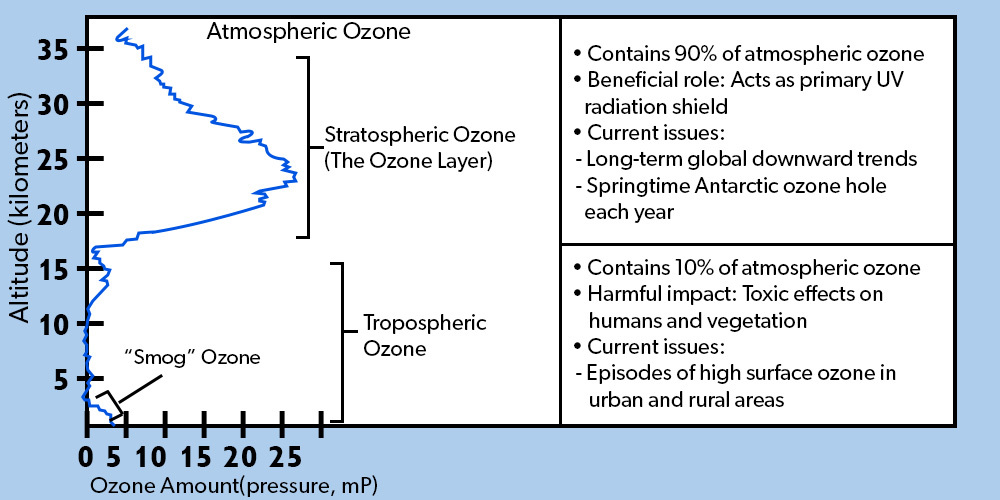 Ground-level ozone is formed just above the earth’s surface up to 2 miles above the ground. It is formed by the interactions of natural and man-made emissions of volatile organic compounds (VOC) and nitrogen oxides (NOx) which are emitted by vehicles, industrial plants, and refineries as well as from chemicals and other sources. Certain parts of volatile organic compounds generate naturally due to emissions from trees and plants but major sources of VOCs include emissions from the chemical industries and organic solvents. The combustion of fossil fuels in power plants and other industrial processes generates significant amounts of nitrogen oxides. The ground-level ozone is called a secondary level pollutant because it is formed by these two primary level pollutants. These emissions react in the presence of sunlight and high temperature to produce a layer of ozone at ground level. It is a colorless gas that reaches unhealthy levels on warm days and under stagnant weather conditions. In certain regions, changes in humidity and wind flow lead to a stagnant atmospheric condition that decreases the dispersion of NOx and VOCs and allows more time for the reaction to happen producing more ozone.

Ground-level ozone is a major air pollutant and exposure to it may cause a variety of health problems that sometimes lead to premature deaths. It harms the human respiratory system, especially lung function. The health hazards associated with ground-level ozone depend on various factors including its concentration in the air, the duration and frequency of exposure, and the volume of air intake per minute. The evidence of health impacts on animals and humans is obtained through controlled clinical studies based on short-term acute exposure to ground-level ozone. The mostly observed symptoms in humans are coughing, chest pain, throat irritation, and congestion. It has adverse effects on patients suffering from bronchitis and asthma as it can affect the proper functioning of the lungs. 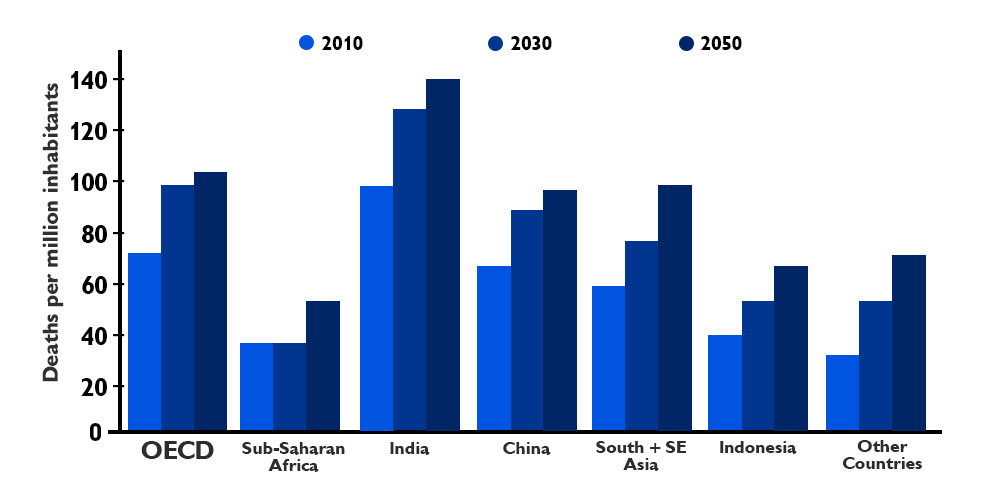 The death rate due to ozone pollution

Effect on Plants and Agriculture:

Increased concentration of ozone at ground level can adversely affect biodiversity and ecosystems including flora and fauna. Prolonged exposure to ozone can harm crops and trees, especially in the growing seasons. Sensitive vegetation including slow-growing crops and long-lived trees is mostly affected by ozone. The impact of ground-level ozone on plants depends not only on the ozone concentration in the atmosphere but also on the duration and frequency of exposure. The climatic conditions like temperature and humidity also play important roles in this regard.

Ground-level ozone is the gas produced as a secondary pollutant through photochemical reactions involving nitrogen oxides and volatile organic compounds in the presence of sunlight at high temperatures. The increase in the primary pollutants like nitrogen oxides and volatile organic compounds in the air creates more chances of interactions between them generating an ozone layer close to the earth’s surface. The ozone is a key pollutant in the air and a greenhouse gas so the increase in ozone concentrations in the troposphere produces a considerable impact on global warming. Again, due to the effect of rapidly changing climatic conditions worldwide, there is an overall rise in temperature in many regions which in turn also influences the production of surface-level ozone.

How To Reduce the Ground-Level Ozone?

The concentration of ozone at the ground level depends on emissions as well as on background conditions. It can increase during warmer months even with the same emissions and can increase during heavy vehicle movements, or factory hours. Ozone itself also moves with the wind making it difficult for regions to independently control pollution. The most important step to minimizing ozone pollution globally is the reduction in fossil fuel consumption more aggressively to cut down nitrogen oxides and volatile organic compounds (VOC) emissions like greenhouse gases. The use of fossil fuels as the source of energy generation in industrial plants and transports also is a major contributor to ground-level ozone. Numerous sources emit  (VOC) and nitrogen oxides (NOx), which react in the atmosphere on hot summer days to create a layer of ozone over the earth’s surface. Communities and industries need to develop and implement strategies to reduce air pollution by controlling the sources that create the ground-level ozone problem.

It is very important to take necessary measures to improve and maintain the air quality standards to avoid harmful effects on humans, animals, and plants. The following strategies are currently being implemented to combat the increasing impact of ozone.

The impact of ozone is proven to be quite harmful to humans causing lungs related emergency medical situations or even deaths. More conscious and serious efforts need to be done toward sector-specific technological measures that can contribute to lower emissions and help control ozone pollution. Reduction in ozone pollution can be achieved through integrated actions involving regions and sectors and through a comprehensive pollution control program.