Government Budget and the Economy: Characteristics, Objectives and Components of Budget

What is a Budget?

Both the Government and private sector are crucial in a mixed economy like India. The Government requires infrastructural, economic, and welfare activities for maximizing the welfare of the country. There is a need for a vast amount of money to finance these activities. The government also generates revenue from various sources like taxes, for which planning and government policies are necessary. A ‘Budget’ is prepared to manage these receipts and payments. A Budget is a detailed program and policies for the given fiscal year.

The financial performance is an explanation of what happened during the past year. The budget’s focus is more on the other part, i.e. Government programs and policies for the upcoming year. Government policies (also known as Fiscal Policies) have two aspects; Revenue and Expenditure. Revenue includes the expected receipts, and expenditure includes the expected payments of the Government.

1. It is an estimate, not an actual statement.

2. It is prepared annually.

4. The expected revenues and expenditures are planned as per the objectives of the Government.

5. In India, the Finance Minister presents the annual budget of the Government for its approval by the parliament. It is approved and then it is implemented.

6. A budget discloses both the financial performance of the Government in the last year and Government policies for the following year.

7. Budget impacts the economy through fiscal discipline and resource allocation.

The Government plays a vital role in increasing the welfare of the people. Government achieves this through budget in the following ways: 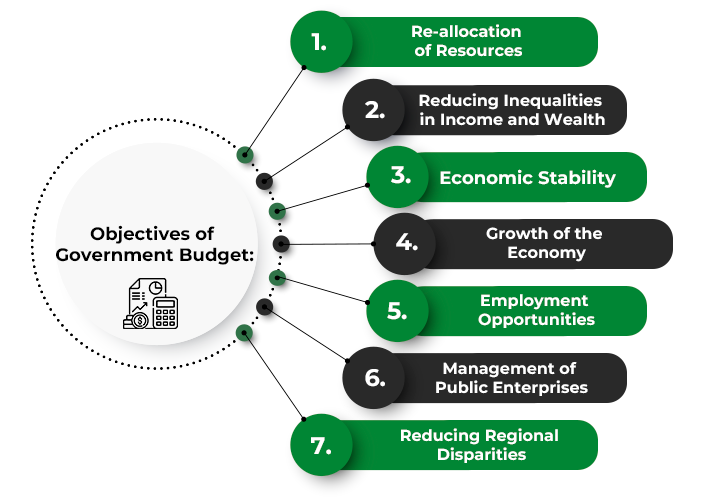 It refers to the direction of resources from one use to the other. In India, the public and private sectors play an essential role in the economy. However, Private enterprises always aim at maximising profits by allocating resources to those areas of production where they can earn higher returns. There are chances that an industry like alcohol may not promote the welfare of people. The Government of a country directs the distribution of resources through its resources in order to strike a balance between the goals of profit maximization and social welfare. For example, there is the production of both necessary and luxury goods. Besides, the Government can influence the allocation of resources through:

2. Reducing Inequalities in Income and Wealth:

Economic inequality means unequal distribution of income and wealth between different groups of society. The Government aims to reduce such inequalities through its budgetary policy. This policy places priority on the welfare of the poor at the same time, imposes heavy taxes on the rich. Higher taxes can be imposed by the Government on income earned by the rich and goods consumed by them to reduce their income. To increase the income of the poor, the Government provides free services like education and health. For example, Government provides free or subsidised rates for LPG connections and food grains to the poor.

Equitable distribution is a way to achieve social justice. It is the principal objective of a welfare-providing country like India. It is also known, as the distribution function as Government alters the income distribution to make it fair distribution between rich and poor.

Economic Stability refers to a situation without significant fluctuations in the price levels and stability of exchange rates in an economy. The Government ensures economic stability in the economy using its revenue and expenditure. Stability can be achieved by protecting the economy from the effects of various trade cycles and their phases like boom, recession, depression, and recovery. Budget is used as an essential policy to combat inflation and deflation in the economy.

The Government tries to achieve economic stability by increasing investment in the economy, which results in development and growth.

4. Growth of the Economy:

The growth of a country depends upon the rate of savings and investment. This will further promote capital formation and production levels, resulting in raising the country’s national income.

Budgetary policy focuses on employment generation through investment in public enterprises. Under these, various schemes like MNREGA are initiated to create employment among poor people and reduce the problem of poverty.

There are mainly two components of budget, i.e., (i) Revenue Budget and (ii) Capital Budget. 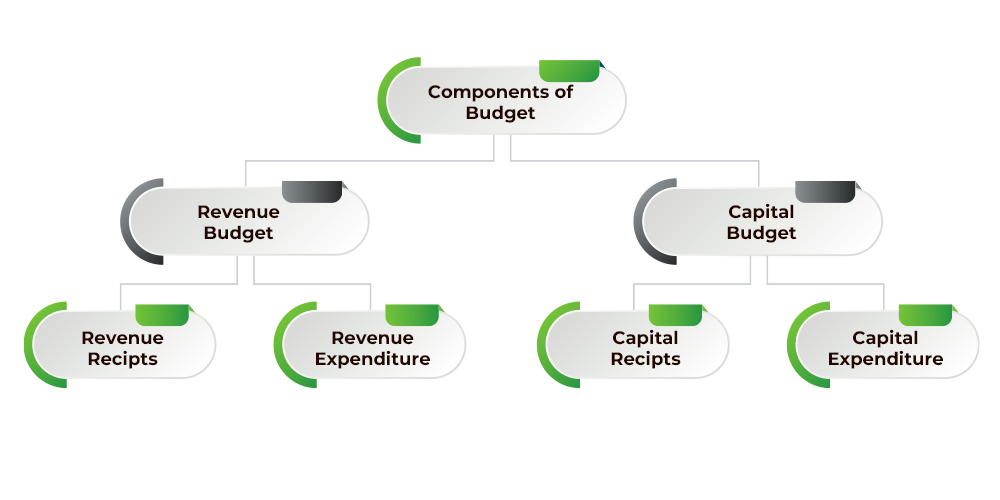 The Revenue Budget can be further classified into two parts:

The capital budget can be further classified into two parts:

Capital receipts are those estimated receipts of the Government during the fiscal year which reduce financial assets or create financial liabilities. These are obtained by the Government by raising funds through borrowings, recoveries of loans, and selling assets.

Capital Expenditures are those estimated expenditures of the Government during the fiscal year which result in the formation of physical or financial assets or a reduction in financial liabilities. It includes acquisition of machinery and equipment, investment in shares, and advances by the Central Government.