How surprising the living earth is! The different sides of living things are surprising. We are in fear of the special conditions of cold mountains, deciduous tree-covered lands, great-sized seas, freshwater inland waters, goes from, or burning springs in which we discover living things. fear before and a deep sense of surprise are made burning light by the that making a thing beautiful of a quickly running horse, moving to another part birds, a flower low land between mountains, or moving near a low person in business. What is living, without error, rightly, as proved by the conditions of living in opposite positions and working together within groups and between groups in a town, or even the smallest units operating within a unit? There are actually 2 questions that are being asked here. The first is special to some science or trade one that makes a request what separates the living from the non-living, and the second is philosophical in nature and seeks an account for the that is of living. We will not attempt to give an answer to the second question as men of science.

Living organisms are those that have distinguishing characteristics like growth, reproduction, etc.

Multiculturalism in the Living World

When it comes to the identification, naming, and categorization of living things, biologists create specific protocols. These protocols, which are the subject of this subsection, have sparked a variety of research methods to examine the diversity of living things.

Why are living organisms classified?

On earth, there are an oversized variety of plants, animals, and bacteria. These living things all have variegated sizes, shapes, colors, habitats, and a variety of other traits. It is difficult to research every living thing on the planet due to the sheer number of them. In order to categorize all living things, scientists have ripened systems. These systems of categorization are founded on laws and precepts that permit the identification, nomenclature, and ultimately nomenclature of an organism. Between 1.7 and 1.8 million species have been discovered and described. This is a reference to biodiversity, which is the quantity and variety of living things on the planet.

The unit of classification is known as a taxonomy. There are various categories used to classify living things. All plants, animals, and microbes in the world are included in taxonomy, which is the science of naming, characterizing, and classifying species. Taxonomists identify, describe, and classify species, particularly those that are novel to science, based on morphological, behavioral, genetic, and biochemical observations. Taxonomy identifies and catalogs the elements of biological diversity, providing the fundamental information necessary for the management and application of the Convention on Biological Diversity. Taxonomists have identified 1.78 million species of animals, plants, and microorganisms throughout the previous 250 years of study, but the true number of species is unknown and likely between 5 and 30 million. Consequently, the classification levels can be explained as follows: 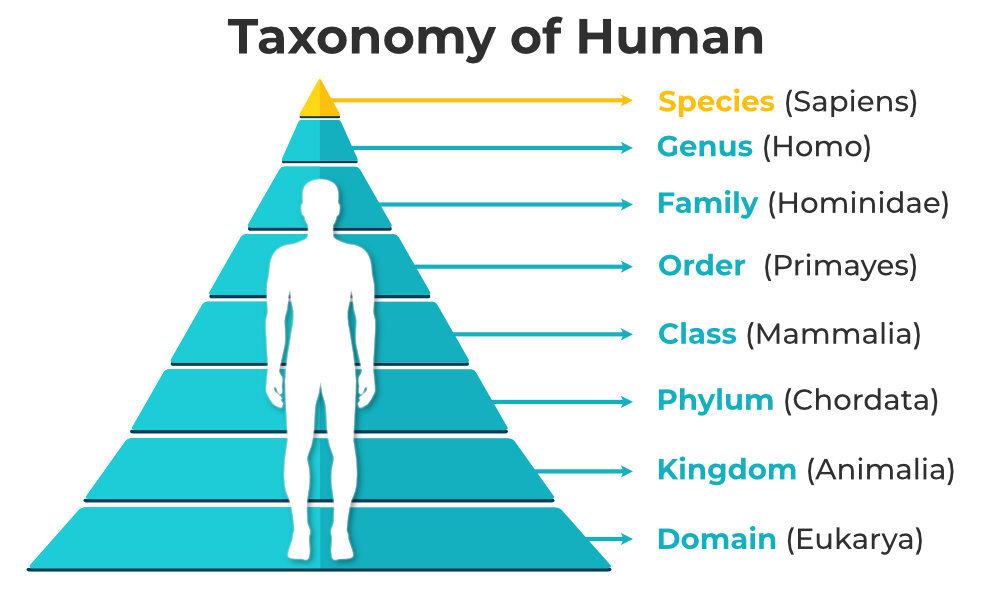 Species, genera, families, and other units of taxonomy are examples of taxons.

A family is a taxonomic group. It is an ordered class that contains at least one related genus. Every one of the genera of a family has a few normal highlights or corresponding characters. They are distinguishable from genera of a connected family by significant and trademark contrasts in both vegetative and conceptive elements. For example, the genera of felines (Fells) and panthers (Panthera) are remembered for the Family Felidae. The individuals from Family Felidae are very particular from those of Family Canidae (canines, foxes, wolves). Essentially, the family Solanaceae contains various genera like Solanum, Datura, Petunia, and Nicotiana. They are discernable from the genera of the connected family Convolvulaceae (Convolvulus, Ipomoea). If we observe the features of a cat and a dog, we will find that they both are quite distinct. So, these are kept in separate families – Felidae (Cats) and Canidae (Dogs).

Genus is a taxonomic group. It is a collection of related species that share a number of associated characteristics. Correlated traits are comparable or shared characteristics that are used to distinguish a taxon from another below the level of species. It is assumed that every species in a genus descended from a single common ancestor. One surviving species can make up a genus, for example, Genus Homo. It belongs to the species Homo sapiens, sometimes known as modern man. There are numerous species in the genus Felis, including the common cat (Felis Domestica), the jungle cat (Felis chaus), and others. Genus is a group of related species, which has more character in common in comparison to species of another genus. For example, potato, brinjal, Makaio, etc., are three different species but all belong to the same genus Solanum.

The scientific name (or scientific epithet) of a genus is also known as its generic name, and it is always capitalized in science and current type guides. It is crucial to binomial nomenclature, which combines the process of naming living things with the scientific name of a species.

The following categories can use the genus name:

The name of the genus may change and be replaced with another over time. Every time fresh information is found, this happens. The previously approved name is consequently replaced with its synonym.

FAQs on Genus and Family

Growth Cell division allows unicellular and multicellular organisms to grow in size and population. Non-living things get bigger as more matter gathers around them.

Such responses can be sustained in vitro. The lack of metabolism is a characteristic of non-living.

Question 3: What does ICBN stand for?

Question 4: What different criteria would you choose to classify people that you meet often?

Question 6: What benefits do organisms receive from having scientific names?

The benefits of giving organisms scientific names include: