The application of biotechnology through innovative methods of cultivation and crop generation has contributed to a great extent to agricultural development. The recent progress is the genetic modification of plants and crops by adding a specific type of DNA into the plant’s genome. This results in Genetically Modified (GM) crops with a new genome structure that gives some new characteristics to the plant. Genetically modified technology is used in agriculture to change the way the plant grows or make it more resistant to diseases. The incorporation of new DNA leads to the modification of characteristics in the new plants produced from the seeds of these plants.  The genetically modified crops are developed with the objective of getting better yield and quality and preventing crop loss for farmers due to damage or insect attack. The most important reasons for growing up with genetically modified crops are as follows:

However, some negative aspects of GM crops have also been highlighted as they may cause some adverse reactions in humans because of their altered DNA structure achieved through combination with other organisms. Both the pros and cons associated with this new technology must be assessed and managed to get effective results.

The government of India has set up a statutory body named Genetic Engineering Appraisal Committee (GEAC) which is the controlling authority for handling GM technology-related matters. India still doesn’t hold any confirmed position on genetically modified crops and has approved only one GM crop for commercial production in 2002 which is Bt (Bacillus thuringiensis) Cotton. The development of Bt cotton has been a success by incorporating a natural bacteria in the cotton plant gene that is toxic to many pests but not hazardous to humans. As a result of the introduction of Bt cotton, India’s cotton production got a boost making India the largest cotton producer in the world.

The approval of brinjal and mustard as GM crops is still under consideration by the GEAC which has suggested taking measures only after getting approval from respective states and union territories where the trials are proposed to be implemented. However, field trials for at least 20 crops are allowed all over India using GM technology. The most remarkable progress in this regard is the production of golden rice as a genetically modified crop. It is produced by the insertion of genes of daffodil and maize in rice plants to get a better quality crop that is insect resistant and enriched with high content of nutrients like vitamins. Despite the ban on commercial production of golden rice, the report of the export of a few tonnes of golden rice to Europe in 2021 has led to India’s loss of reputation forcing the Indian government to set up an inquiry by the agriculture export authority to investigate in this matter.

Now it has come into the picture that unauthorized production of genetically modified brinjal and cotton are also being carried out in different parts without government approval. In view of such new instances, the government is strengthening the regulatory practices in this regard to gain the trust and interest of domestic as well as international consumers. 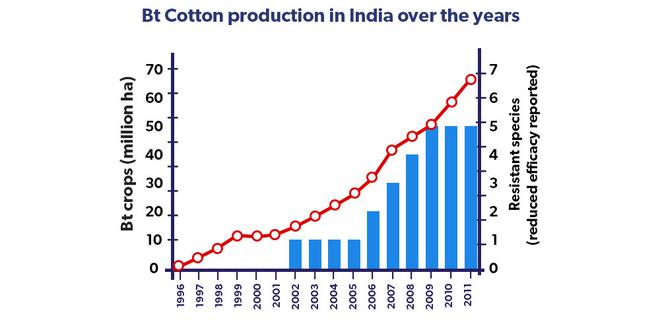 Any decision on the adoption of genetically modified technologies in the development of agriculture must be backed up by scientific evidence. This can also help in guiding people and building confidence in the processes and products. A participatory approach should be adopted to develop and follow regulatory protocols to prevent any unfair and illegal practices involving GM crops.