If P, Q, R are subsets of the universal set U, then

The following system of equations

has a unique solution. The only possible value(s) for α is/are

The choice E was not there in GATE paper. We have added it as the given 4 choices don't seem correct.

In the Karnaugh map shown below, X denotes a don't care term. What is the minimal form of the function represented by the Karnaugh map?
GATE CS 2008    Digital Logic & Number representation    Logic functions and Minimization
Discuss it
Question 5 Explanation: 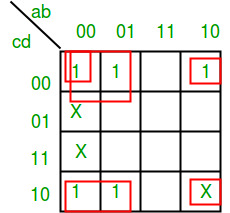 GATE CS 2008    Digital Logic & Number representation    Number Representation
Discuss it
Question 6 Explanation:
As we can see 121 contains digit ‘2’ which can’t be represented directly in base ‘2’ (as digits should be less than base) so number system must have   “r>2”. Ans (D) part.
Given f1, f3 and f in canonical sum of products form (in decimal) for the circuit

GATE CS 2008    Recursively enumerable sets and Turing machines
Discuss it
Question 8 Explanation:
Turing machine can be designed for ap using the concept of ‘Sieve of Eratosthenes’.

Suppose we are given an integer ‘n’ and we want to find out all the prime numbers less than or equal to ‘n’. We repeat the following steps : We find the smallest number in the list, declare it prime and eliminate all the multiples of that number from the list. We keep doing this until each element has been declared prime or eliminated from the list.

In the above steps, what we do is we find the first non-black symbol from the left. Let this symbol occur at position ‘x’. Suppose ‘x’ is a prime number. If this non-blank symbol is $, input string will be accepted. But, if the symbol is ‘a’, we mark it as a* and replace all the multiples of ‘x’ with the symbol ‘blank’. If at the end, symbol $ is replaced with 'blank’, we reject the input string (because p will be multiple of some ‘x’ in that case). Else, we go back and repeat the steps.

Thus, the input is neither regular nor context-free, but is accepted by a Turing machine.

Please comment below if you find anything wrong in the above post.
Which of the following are decidable?
GATE CS 2008    Undecidability
Discuss it
Question 9 Explanation:
(A) Intersection of two regular languages is regular and checking if a regular language is infinite is decidable. (B) Deciding regularity of a context free language is undecidable. We check if L(CFG) contains any string with length between n and 2n−1 , where n is the pumping lemma constant. If so, L(CFG) is infinite otherwise it is finite. (C) Equality problem is undecidable for all languages except in case of finite automata i.e. for regular languages. (D) We have to check if the grammar obeys the rules of CFG. If, it obeys such rules then it is decidable.  Thus, option (B) is correct. Please comment below if you find anything wrong in the above post.
Which of the following describes a handle (as applicable to LR-parsing) appropriately?
GATE CS 2008    Parsing and Syntax directed translation
Discuss it
Question 10 Explanation:
Let's first understand the terminology used here. LR Parsing - Here 'L' stands for Left to Right screening of input string, and 'R' stands for Right Most Derivation in Reverse ( because it is about bottom-up parsing). Sentential Form - Suppose For a given Context Free Grammar G, we have a start symbol S, then to define Language generated by Grammar G, i.e. L(G), we start the derivation starting from S using the production rules of the grammar. After one complete derivation we get a string w which consists of only terminal symbols, i.e. w belongs to L(G). Then we can say that w is a sentence of the Grammar G. Now, while the derivation process, if it gets some form q, where q may contain some Non-terminal then we say that q is a sentential form of the Grammar G. Even the start symbol S is also the sentential form of the Grammar G ( because it also contains Non-terminal S). Here { abbcde } is the sentence of the Grammar( because it contains only terminal symbols), and { S, aAcBe, aAcde, aAbcde } are the sentential forms of the G ( because these forms contain non-terminals during the derivation process ) Now, let's look at the question. The question is related to LR parsing which is a bottom-up parsing. Let's take the same grammar above, as it is a bottom up parsing we need to start from the string "abbcde" and try to get S using production rules. The above process is called reduction. The RHS of the Production which is being replaced by their LHS is called Handle, So , { b, Ab, d, aAcBe} are handles, and replacing it with its LHS is called Handle-Pruning. Hence option D suits best.
There are 85 questions to complete.
123456789
You have completed
questions
question
Your accuracy is
Correct
Wrong
Partial-Credit
You have not finished your quiz. If you leave this page, your progress will be lost.
Correct Answer
You Selected
Not Attempted
Final Score on Quiz
Attempted Questions Correct
Attempted Questions Wrong
Questions Not Attempted
Total Questions on Quiz
Question Details
Results
Date
Score
Hint
Time allowed
minutes
seconds
Time used
Answer Choice(s) Selected
Question Text
All done
Need more practice!
Keep trying!
Not bad!
Good work!
Perfect!
My Personal Notes arrow_drop_up
What's New