P, Q, R and S are four types of dangerous microbes recently found in a human habitat. The area of each circle with its diameter printed in brackets represents the growth of a single microbe surviving human immunity system within 24 hours of entering the body. The danger to human beings varies proportionately with the toxicity, potency and growth attributed to a microbe shown in the figure below: 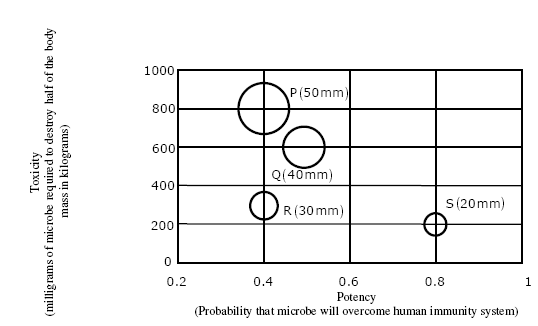 A pharmaceutical company is contemplating the development of a vaccine against the most dangerous microbe. Which microbe should the company target in its first attempt?
(A) P
(B) Q
(C) R
(D) S

Answer: (A)
Explanation: Answer should be A

**The danger to human beings varies proportionately with the toxicity, potency and growth attributed to a microbe**

So the level of danger will be maximum for S.