Let G be the directed, weighted graph shown in below figure 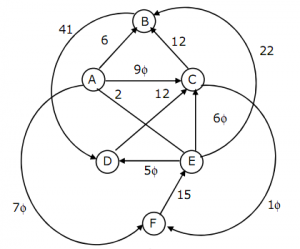 We are interested in the shortest paths from A.

Answer:
Explanation: According to Dijkstra’s algorithm:
(a) Sequence of vertices when algorithm start traversing from A: A -> B -> D -> C -> F -> E
(b) The sequence remain same as answer (a).
(c) Cost of the shortest path from A to E is 84.
Quiz of this Question