Gastric Glands are situated at the linings of the stomach. The stomach is the first organ that plays a vital role in the digestive system of humans. The stomach is a connector between the Esophagus & Duodenum. Duodenum is the beginning part of the small intestine. Basically, the Stomach can be divided into four parts. They are Cardiac Region, Fundic Region, the Stomach Body, and Pyloric Region. Gastric Glands are situated in all three parts. As it is present in the wall of the Stomach then it is obvious, that they are present throughout the stomach. Gastric glands help to digest the food which human consumes. Gastric glands secrete gastric juice which is the main component of the digestive system. It breaks down the protein available in the food. In this way, the simpler form of food will be easily digestible by the small intestine. 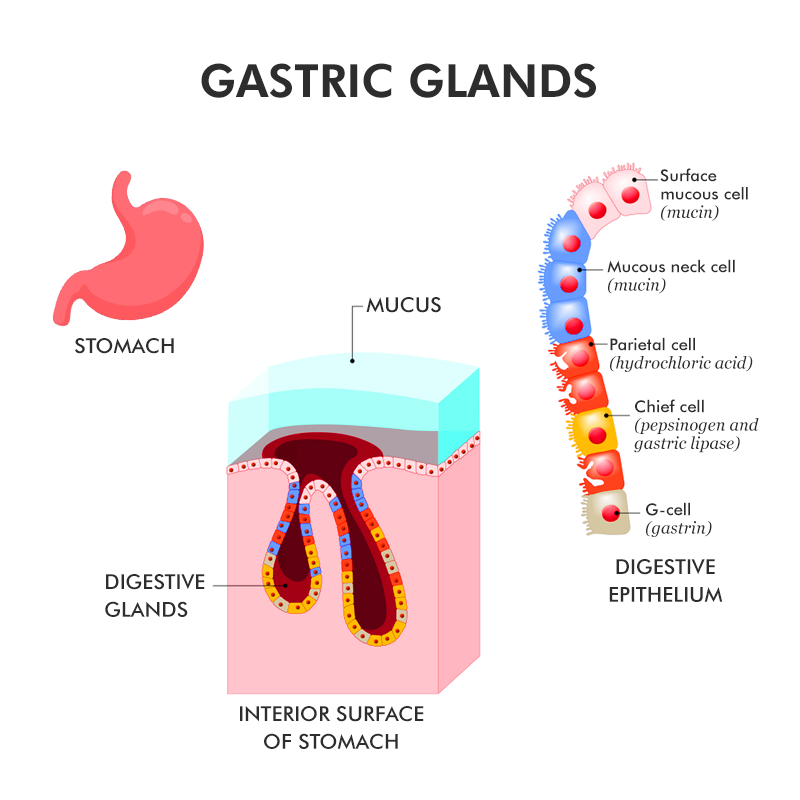 These cells are present in the Gastric glands at random locations. After the part of the Foveolar cell, they can present at any random part of gastric glands. Among all the cells, Parietal cells present a huge number. It is the most important of all the cells. As it needs to be always ready to secrete the HCl. Their main function of them is to secrete the HCl. In these cells, there are fine channels called Canaliculi which help to secrete the HCl. With the help of Canaliculi, HCl directly comes into the stomach body. Along with HCl, Castle’s Intrinsic Factor is also secreted from Oxyntic cells.

These cells are situated above Endocrine cells. These cells mainly secrete Pepsinogen in the stomach. During childhood, along with Pepsinogen, Prorenin enzymes are also secret from the Chief cells. But in adulthood, it stops secreting the Prorenin. Along with all these enzymes, from chief cells, a small amount of Gastric Lipase is also secreted. This gastric lipase helps to digest the fat in the food. But it is in a very small amount that we can ignore the presence of lipase in the gastric juice.

These cells are situated at the linear-like part of gastric glands. These Endocrine Glands can further divide into three major cells:

Gastric glands are the main pillar of the digestion system. When human consumes food, it directly comes to the stomach. Though before that they come across some enzymes in salivary glands. Though they are not enough to completely digest the food. Some amount of carbohydrates breaks down there. But when the food comes into the stomach, it starts to break down by the gastric juice. Gastric juice is nothing but Hydro Chloric Acid (HCl). This strong acid completely breaks down (50%-55%) the food. After breaking down the food it converts to Chyme. Chyme is a pulp-like structure that is made with partially digestive food & gastric juice. This pulp is now easily digestible by the intestine. The alkaline nature of the intestine will reduce the acidic nature of the Chyme. Now, if there is no Gastric Gland present in the stomach then digestion will be difficult. As the food which human consumes will directly come to the intestine. And intestine does not have to capacity to break down the complete food. Hence, balance in the digestion system will lose.

Gastric glands not only secrete gastric juice (HCl) but also, secrete many other factors which play a vital role in digestion

From Peptic cells of Gastric glands, pepsinogen is secreted. This pepsinogen is activated by the HCl. Also, HCl helps to absorb the iron & vitamins which are present in the food. Mainly, vitamin B12 is absorbed by gastric juice. As this vitamin may cause allergic symptoms in the human body. Also, Strong acid like HCl helps to kill the bacteria which may be present in the food which human consumes. Hence, it helps to protect the body’s immunity.

From the endocrine cells of the gastric glands, Gastrin & Histamine secretes. They help to regulate the secretion of gastric juice.

Though it is very rare to find a gastric gland disorder, still we can list two major disorders of gastric glands.

Question 1: How many phases are there in gastric secretions? Name the phases.

There are three phases. They are Cephalic, Gastric & Intestinal. All of these phases are circulated by the human phycology. It depends upon the thought process of humans for a particular food.

Question 2: At which time of the day gastric juice secretion is at its top level?

There is not any evidence, but scientists believe that the secretion of gastric juice is at its top peak when it is dark night. Mainly when midnight comes. At that time the human body takes a rest, after getting their food, that is the best time to digest whatever human consumes.

Question 3: At which condition does the gastric juice secrete high in amount?

Question 4: What happens when the stomach secretes more gastric acid than the normal quantity?

Due to some disorders with gastric glands, it is quite rare to visualize gastric glands secreting more gastric juice. This disease is known as gastric hyperacidity. Often it is called acid dyspepsia disease.

Question 5: What can help to reduce the gastric acid secretion in the stomach?

Scientists believe that incurring water in large amounts can control gastric acid secretion. It is like an external factor that can control the secretion of gastric juice. As water will mix up with HCl & reduce the secretion.