Garbage collection in Java is the process by which Java programs perform automatic memory management. Java programs compile to bytecode that can be run on a Java Virtual Machine, or JVM for short. When Java programs run on the JVM, objects are created on the heap, which is a portion of memory dedicated to the program. Eventually, some objects will no longer be needed. The garbage collector finds these unused objects and deletes them to free up memory.

What is Garbage Collection?

In C/C++, a programmer is responsible for both the creation and destruction of objects. Usually, programmer neglects the destruction of useless objects. Due to this negligence, at a certain point, sufficient memory may not be available to create new objects, and the entire program will terminate abnormally, causing OutOfMemoryErrors.

How Does Garbage Collection in Java works?

Two types of garbage collection activity usually happen in Java. These are:

1. Unreachable objects: An object is said to be unreachable if it doesn’t contain any reference to it. Also, note that objects which are part of the island of isolation are also unreachable. 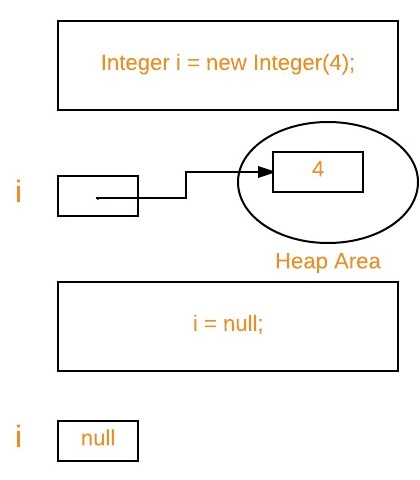 Ways to make an object eligible for Garbage Collector

Based on our requirement, we can override finalize() method for performing our cleanup activities like closing connection from the database.

Advantages of Garbage Collection in Java

The advantages of Garbage Collection in Java are:

Let’s take a real-life example, where we use the concept of the garbage collector.

Question: Suppose you go for the internship at GeeksForGeeks, and you were told to write a program to count the number of employees working in the company(excluding interns). To make this program, you have to use the concept of a garbage collector.

This is the actual task you were given at the company:

Write a program to create a class called Employee having the following data members.

1. An ID for storing unique id allocated to every employee.
2. Name of employee.
3. age of an employee.

Now any beginner, who doesn’t know Garbage Collector in Java will code like this:

This article is contributed by Chirag Agarwal and Gaurav Miglani. Please write comments if you find anything incorrect or you want to share more information about the topic discussed above.