Money is any object or item which is generally accepted as a mode for payment of goods & services and repayment of loans or debts, such as taxes, etc., in a particular nation or country. Money was invented to facilitate trade as the barter system was not able to express the value and prices of goods & services. The term money covers all things like currency notes, coins, cheques, etc., to carry out all economic transactions and settle claims. As a currency, money circulates from country to country and person to person to facilitate trade. Different stages of money are Commodity Money, Metallic Money, Paper Money, Credit Money and Plastic Money.

According to D.H. Robertson, “Anything which is widely accepted in payment for goods or in discharge of other kinds of business obligation, is called money.” 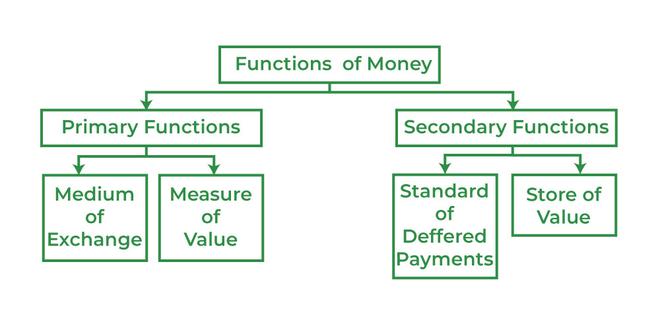 Primary functions consist of the most important functions performed by money in every country. These functions are:

As a medium of exchange, money can be used to make payments to all the transactions related to goods & services. It is the most important function of money. As money is universally accepted, therefore all exchanges take place in terms of money.

As a measure of value money works as a common parameter, in which the value of every good & service is expressed in monetary terms.

For example, the value of every product is estimated in monetary terms. The value of 1 egg is estimated at ₹ 6 in India, and the value of a packet of bread is around ₹ 45. So, money works as a measure of the value of all goods & services and is the amount that is required to be received or paid during the transaction. Therefore, it is one of the most essential functions of money.

The Standard of deferred payments states that money act as a “standard of payment”, which is to make in the present or in near future. On a daily basis, millions of transactions are made in which payments are not made immediately. Money encourages such transactions and facilitates capital formation & economic development of the nation. This function of money is important because:

For example, if someone borrows a certain amount from another person, they need to repay the amount to that person with interest. With money as standard payment, it is easy to pay the interest or make deferred payments. This has led to an increase in lending and borrowing transactions and has contributed to the formation of financial institutions.

2. Store of Value or Asset Function of Money

Money as a store value can be used to store wealth in the most economical and convenient way and to transfer the purchasing power from the present to the future.

Money as a store value has the following advantages:

Money has overcome the Drawbacks of the Barter System

As a medium of exchange, money eliminates the major problem of lack of double coincidence of wants of barter system. It allows both sale and purchase activity to act independently, which leads to increased satisfaction for both the parties involved. It means that a buyer can purchase goods through money; similarly, a seller can sell goods and can get money in return.

Under the barter system, different goods of different values were exchanged, as there was no single unit of measurement or denomination to express their value. As a measure of value, money provides a common parameter to express the value of all goods & services in monetary terms, which makes it easy to compare the relative value of two commodities.

In the barter system, there is no appropriate standard of deferred payments, which makes credit transactions difficult to execute, as the borrower may not be able to arrange the same quality goods at the time of repayment. Money solves this problem by providing an appropriate standard for deferred payments. This has led to an increase in lending and borrowing transactions and has contributed to the formation of financial institutions.

In a barter system, it was very difficult to store wealth in form of goods, as most of the goods were of perishable nature and required huge space and heavy transportation costs. Money makes it easy to store wealth in the most convenient, secure, and economical way to meet contingencies and unpredictable emergencies.