Functions are useful when you want to perform a certain task multiple times. A function accepts input arguments and produces the output by executing valid R commands that are inside the function. In R Programming Language when you are creating a function the function name and the file in which you are creating the function need not be the same and you can have one or more function definitions in a single R file.

Types of function in R Language

Functions are created in R by using the command function(). The general structure of the function file is as follows: 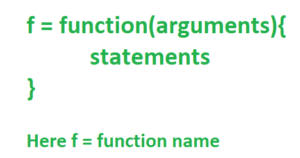 Note: In the above syntax f is the function name, this means that you are creating a function with name f which takes certain arguments and executes the following statements.

R provides built-in functions like print(), cat(), etc. but we can also create our own functions. These functions are called user-defined functions.

Now create a function in R that will take a single input and gives us a single output.

Now create a function in R Language that will take multiple inputs and gives us multiple outputs using a list.

The functions in R Language takes multiple input objects but returned only one object as output, this is, however, not a limitation because you can create lists of all the outputs which you want to create and once the list is created you can access them into the elements of the list and get the answers which you want.

Let us consider this example to create a function “Rectangle” which takes “length” and “width” of the rectangle and returns area and perimeter of that rectangle. Since R Language can return only one object. Hence, create one object which is a list that contains “area” and “perimeter” and return the list.

Sometimes creating an R script file, loading it, executing it is a lot of work when you want to just create a very small function. So, what we can do in this kind of situation is an inline function.

To create an inline function you have to use the function command with the argument x and then the expression of the function.

There are several ways you can pass the arguments to the function:

Now, let us see the examples for each of these cases in the following R code:

In R the functions are executed in a lazy fashion. When we say lazy what it means is if some arguments are missing the function is still executed as long as the execution does not involve those arguments.

If you do not pass the argument and then use it in the definition of the function it will throw an error that this “radius” is not passed and it is being used in the function definition.