Morphology and Anatomy of Frogs

Animals’ structural organization begins with their smallest basic unit, the cell. Additionally, tissues are made up of a collection of cells with comparable functions. Organs are created when tissues come together to carry out particular tasks.

Frogs are tailed, carnivorous amphibians that are common in India. There are many kinds of frogs in the world, and the Indian amphibians are known as Rana tigrina. They are vertebrates that belong to the amphibian order (phylum Chordata). Since amphibians are cold-blooded creatures with variable body temperatures, they must safeguard themselves against extreme temperatures to keep their body temperatures at a healthy level. Thus, even during summer and winter, they adhere to aestivation and hibernation, respectively. Frogs also have the ability to camouflage, or alter the colour of their skin to blend in with their surroundings. 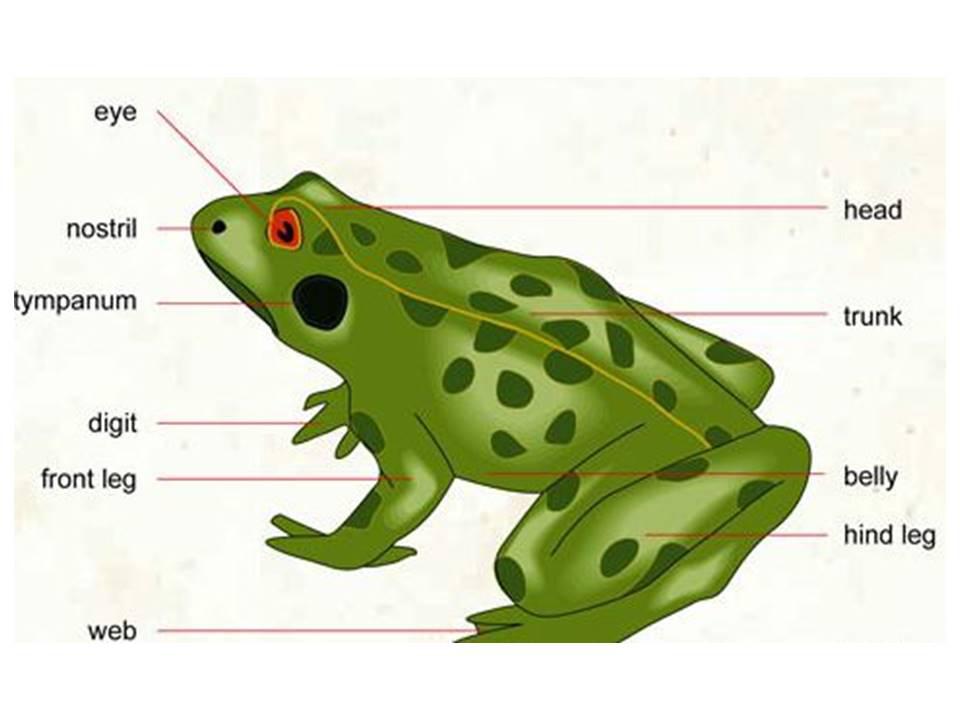 Adult frogs lack tails, despite the fact that their larvae do. A mature frog has a thick body that is divided into the head and trunk. A pair of nostrils, a pair of projecting eyes, a membrane  (ear), squishy moist skin, and webbed limbs are other outward characteristics.

Frogs often have slippery, wet, and highly porous skin that allows them to breathe and absorb water. As a result, frogs’ moist skin serves as an organ of respiration. Additionally, the skin is a glandular organ that secretes mucus and poisons to alert animals to potential predators. According to secretions, the skin’s colour can range from brown colour to green to vibrant hues.

Frogs’ forelimbs and also hind limbs work together to help them move around. Frogs exhibit sexual dimorphism because they are unisexual. Vocal sacs and the copulatory pad on the forelimbs are characteristics of male frogs that set them apart from female frogs. These physical traits are absent in female frogs.

Since frogs produce mucus, their skin is wet and slippery. Typically, the dorsal side of the body is olive green with dark, erratic dots. On the ventral side, the skin is uniformly light yellow.
Frogs can be divided into two parts: the head and the trunk. Above the lips, there are two nostrils. A nictitating membrane covers the bulging eyes. While the frog is submerged, these membranes guard its eyes. The membranous tympanum along both sides of the eyes serves as a representation of the ears.

Both the forelimbs and the hindlimbs are useful for walking, leaping, and digging. Five digits are on the rear limbs. The forelimbs are smaller and less muscular than the hind limbs. Four digits make up the forelimbs. Swimmable digits are advantageous. In frogs, sexual dimorphism is present. Male frogs have vocal sacs that produce sound and a copulatory pad on the first digit of the forelimb.

Frogs have a well-developed body plan with structures that support their physiological functions. All of the organ systems, including the respiratory, circulatory, excretory, nervous, and reproductive systems, are housed in the body cavity and perform tasks that are nearly identical to those of the human body systems.

The amphibian breathes through its skin and its lungs, respectively, in two different ways. The skin serves as the body’s respiratory system in aquatic ecosystems, where dissolved oxygen is diffused. The term for this is cutaneous respiration. They breathe through their skin and lungs simultaneously while on land. Air entering through the nostrils travels through the buccal cavity and into the lungs during pulmonary breathing. However, they only utilise their skin to breathe while they sleep in the summer and winter.

Frogs have a strong, muscular heart with two atria and only one ventricle as its three chambers. Food, air, and other chemicals are transported throughout the body by the network of blood arteries with the assistance of blood and lymph. Blood cells and plasma make up the blood.

The primary excretory substance of the ureotelic frog is urea. They have a distinct urine system made up of a urinary system, cloaca, ureters, and two kidneys. The nephron, a structural component of the kidneys, would play a role in filtering blood and also helps in the excretion of waste products.

The digestive tract of the frog is made up of the alimentary canal and its auxiliary organs. Frogs have small intestines because they are carnivorous. Beginning in the oral cavity then the alimentary canal travels by the pharynx, food pipe, stomach, and the intestines like small and large intestines, and later rectum, and finishes up at the cloaca. As the foodstuff materials move through the different sections of the gastrointestinal system, they gradually begin to be processed or digested.

Both female and male frogs would have a reproductive system that produces the gametes needed for reproduction. The sperm produced by the male frog’s testes is released through the cloaca. ovaries would be in pair female frog create an ovum, which is then sent to an oviduct that leads to the cloaca. A typical route for excretion as well as for the reproduction would be cloaca. Almost two thousand to three thousand eggs are laid at a time, and they are externally fertilised.

Question 1: What is meant by cutaneous respiration?

Question 2: Function of kidney in the frog?

The kidney would help in eliminating waste products and filtering by the help of the urinary system like the urinary tract, and bladder.

It helps in the change of colour and blending in the surrounding for protecting from the Predator and so camouflage would be very useful for the frog.

Question 4: How do frogs absorb water?

As the frogs would possess slippery and porous skin which plays an essential role in both breathing and the absorption of water.

During the metamorphosis frog egg would emerge into a tadpole and then it would develop the legs that is first back and then front and then grow into a fully adult frog.

The presence of copulatory pads and the vocal sacs on the limbs make male frog different from the female frog.