Association Mining searches for frequent items in the data set. In frequent mining usually, interesting associations and correlations between item sets in transactional and relational databases are found. In short, Frequent Mining shows which items appear together in a transaction or relationship.

Need of Association Mining: Frequent mining is the generation of association rules from a Transactional Dataset. If there are 2 items X and Y purchased frequently then it’s good to put them together in stores or provide some discount offer on one item on purchase of another item. This can really increase sales. For example, it is likely to find that if a customer buys Milk and bread he/she also buys Butter. So the association rule is [‘milk]^[‘bread’]=>[‘butter’]. So the seller can suggest the customer buy butter if he/she buys Milk and Bread.

If a rule satisfies both minimum support and minimum confidence, it is a strong rule.

Example On finding Frequent Itemsets – Consider the given dataset with given transactions. 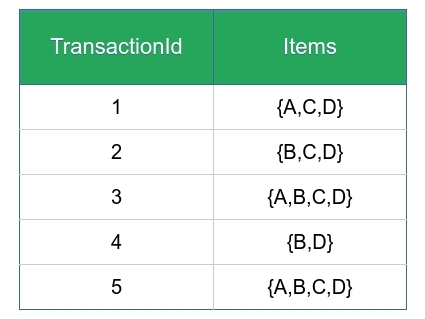