Frequency Table With Intervals in R

A data frame in R may contain discrete data in the form of integer or floating point values. The values may be distinct or repeating in nature. The frequency table for discrete data can be easily created with the help of the table() method in R, which returns the values along with their respective counts.

Get a frequency Table With Intervals in R

The interval table can be easily created using the cut() method. The cut method has the following syntax :

The in-built seq() method is used to generate a sequence starting from the first argument until the second argument each with a difference from the third argument.

The vector specified is then cut into specified bins and the respective counts of each of the intervals are returned by the table() method in R. 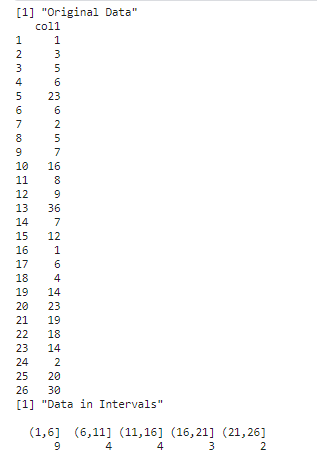 Get the frequency based on intervals in R on sample data

A random sample can also be generated between a specified set of numbers with a fixed length associated with it. It saves us from creating the sample list manually. It returns a vector of values as the output.

The intervals are then again created with the help of cut() method as illustrated earlier. It is user dependent to choose the size of bins. Small the size of bins for a large dataset is less preferable, however we can use it with ease with a larger data set. 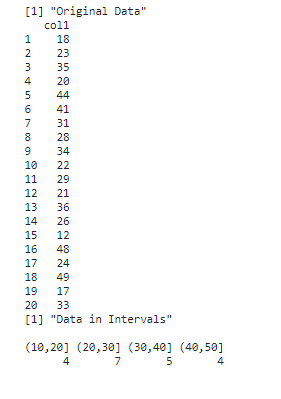 Get the frequency based on intervals in R on vector data

Functions can also be used to generate the vector of integers or string values. The rpois() method in R is used to draw randomly computed poisson density. The rpois method has the following syntax :

However, since the values are drawn randomly using just the number of observations, instead of manually deciding the bins, we can extract the minimum and maximum values of the returned values in the density vector using the in-built min() and max() methods.
A sequence can then be generated between these intervals to return accurate results. A frequency table is then drawn using the table() method in R. 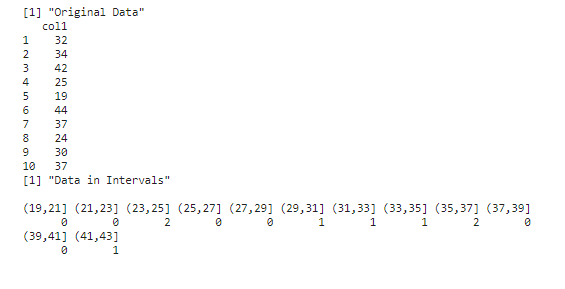 Previous
Apply a function to each group using Dplyr in R
Next
Frequency Distribution of Qualitative Data in R
Related Articles
1. Aggregate Daily Data to Month and Year Intervals in R DataFrame
2. Shading confidence intervals manually with ggplot2 in R
3. How to Change Axis Intervals in R Plots?
4. How to Find Confidence Intervals in R?
5. Cumulative Frequency and Probability Table in R
6. How to create a frequency table for categorical data in R ?
7. How to make a frequency distribution table in R ?
8. How to Create Frequency Table by Group using Dplyr in R
9. How to Use dplyr to Generate a Frequency Table in R
10. Frequency table in R
Article Contributed By :