Fraction is defined as the part of a whole. Fraction is used not only in mathematics but in real life frequently. The ancient Egyptians were the first people to start using fractions. They used it in their daily life problems, like distributing food and supplies. The word ‘fraction’ is derived from the Latin word ‘fractus’, which means ‘broken’ in English, and it fits right to the meaning of fraction. Let’s learn in detail about fractions and their types.

What is a Fraction?

Fractions are defined as part of a whole. Fractions are the numerical value that can be a portion or section of any quantity where the quantity can be anything. So, fractions are a section or portion of a quantity. Below is an example of fractions, a pizza is divided into 8 equal parts, and each part is a fraction of the entire pizza, so the parts are the fractions of the pizza, which is the quantity (whole). If one part is taken out, it is represented as 1/8 in fraction form. A fraction can be written in many ways, 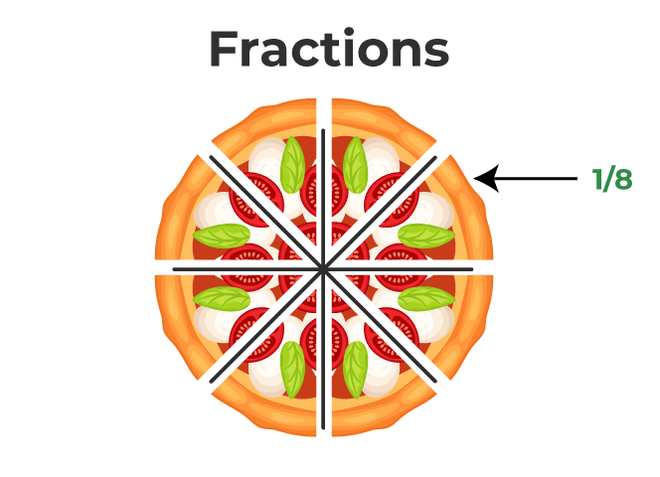 The remaining parts collectively will be 7/8 of the pizza as of now; there are only 7 pieces left. Similarly, if 2 pieces are taken out, they will be 2/8 of the entire pizza. It can be simplified and written as 1/4.

Parts of a Fraction

Operations on fractions are simple arithmetic operations like addition, multiplication, division, etc. Let’s take a look at the operations that we can do on fractions:

Reducing fractions is simplifying fractions by dividing both numerator and denominator with the same value. It is important to note that dividing them by 1 will not make any change in the fraction.

88/42 is an improper fraction and both numerator and denominator are divisible by 2. Dividing them by 2:

Here, the denominators of both fractions are not same, LCM of 3 and 5 is 15,

The least common denominator of 2 and 5 is 10. Solving:

There are some important properties of fractions similar to whole numbers, natural numbers, etc. Let’s take a look at those properties:

A unit fraction is defined as a fraction with 1 as a numerator and is known as a Unit Fraction, for example – 1/8, 1/10, 1/4, 1/6, 1/11, etc. It can be said that all unit fractions are proper fractions since all unit fractions have 1 in the numerator, which is lesser than the denominator. The below given example explains unit fraction very nicely. Here, a cake is divided into 4 equal parts. If the whole cake is 1, then each quarter of the cake is the fraction 1/4. 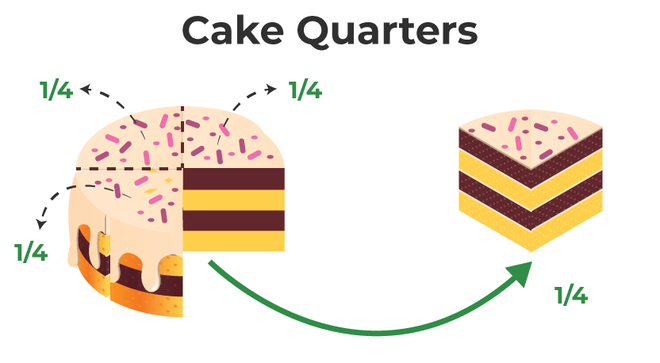 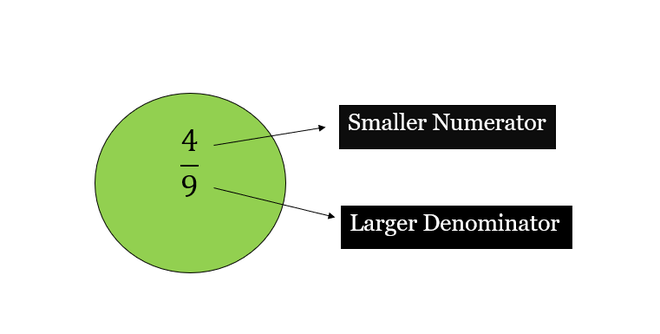 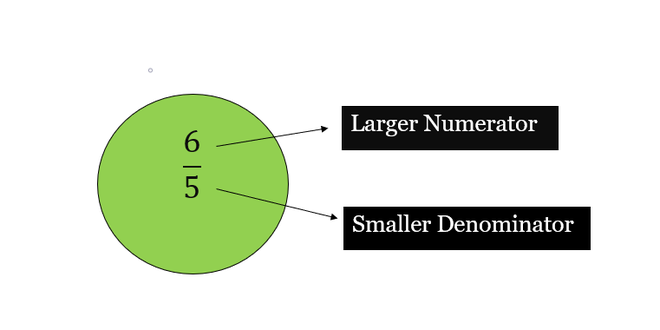 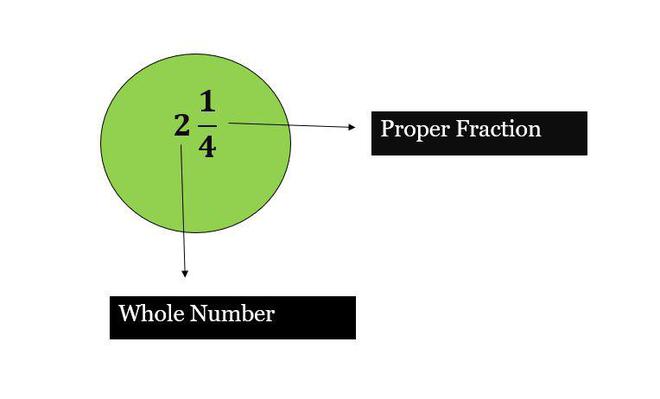 Other Types of Fractions 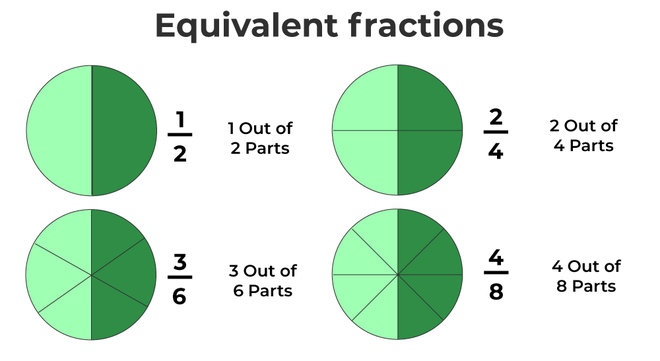 Equivalent fraction by multiplying with the same number, lets multiply by 2:

Equivalent fraction by division with the same number, here, both numerator and denominator are divisible by 4, dividing by 4:

Fraction on a Number Line

Fractions on a number line are represented between the interval of two integers. Fractions are a part of the whole. Therefore, the whole is divided into equal parts, the number of parts between the integers is decided by the denominator value, and the numerator value is the point where the fraction lies. For example, if we are required to represent 1/8 on a number line, the division will be between 0 and 1, and since 8 is in the denominator, the whole is divided into 8 equal parts, where the first represents 1/8. Similarly, the second part represents 2/8, and so on.

How to Convert Fractions into Decimals?

Decimals are the numbers that represent fractions but in decimal form. For instance, 1/4 in fraction can be written as 0.25 in decimal form. Decimals are mostly preferred as they can be used for multiple mathematical operations where solving fractions seems complex, like addition, subtraction, etc. For example: In order to add 1/2 and 1/4, it is easier to solve the terms in decimals. Converting fractions into decimals ⇢ 0.5 + 0.25 = 0.75.

How to Convert a Decimal into a Fraction?

Value of Pi in Fraction

For example: Convert 0.8 into a fraction.

Equivalent fraction by multiplying with the same number, lets multiply by 2:

Equivalent fraction by division with the same number, here, both numerator and denominator are divisible by 3, dividing by 3:

Question 2: In a class of 90 students, 1/3rd of the students do not like cricket. How many students like cricket?

This is a Unit fraction because all the fractions have 1 as a numerator.

Question 4: Determine the type of fraction 7¼.

Question 5: What is the equivalent fraction of 7/5?

To find the equivalent fraction of 7/5, we need to multiply both numerator and denominator by the same number.

Question 1: What is comparing fractions?

Question 2: How to multiply fractions?

Question 3: How to divide fractions?

Question 4: How to add fractions?

Question 5: What is an improper fraction?

Question 6: What fraction of a day is 8 hours?

Previous
What are the odds of flipping 12 heads in a row?
Next
What are Ionic Compounds?
Related Articles
1. Program to add two fractions
2. How to Solve Equivalent Fractions?
3. Product of given N fractions in reduced form
4. How to Divide Mixed fractions?
5. How to Add Fractions with Negative Numbers?
6. LCM and HCF of fractions
7. Find N fractions that sum upto a given fraction N/D
8. Print all proper fractions with denominators less than equal to N
9. Count Pandigital Fractions pairs in given Array
10. How to Add Mixed Fractions with Different Denominators?
Article Contributed By : 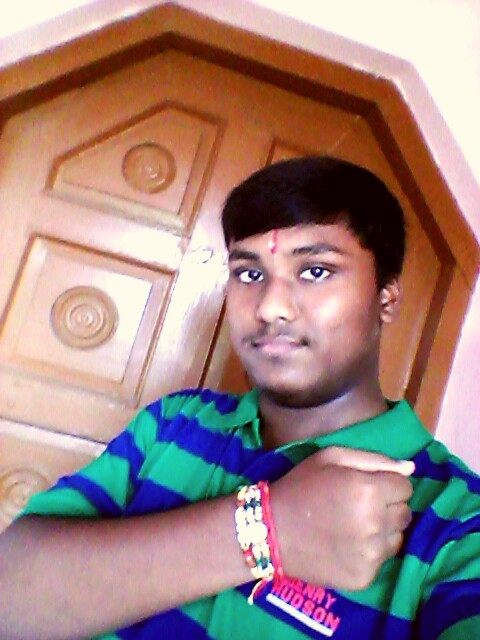