Planar Graph :
If a graph can be drawn on the plane without crossing, it is said to be planar.
Coloring of a simple graph is the assignment of color to each vertex of the graph so that no two adjacent vertices are assigned the same color.

Chromatic Number :
The minimum number of colors needed to paint a graph G is called the chromatic number of G & is denoted by – μ (G)

Adjacent Regions :
An assignment of colors to the regions of a map such that adjacent regions have different colors.
A map ‘M’ is n – colorable if there exists a coloring of M which uses ‘n’ colors.

Four Color Theorem :
In 1852, Francis Guthrie, a student of Augustus De Morgan, a notable British mathematician and logician, proposed the 4-color problem. He defined the problem in terms of maps that meet specific requirements, such as not having any holes and connecting every region (e.g. country or state) so that no region exists in two or more non-contiguous sections.
Guthrie asserted that with such maps, no more than four colors would be required to color the map so that no two adjacent parts were the same color.
If the regions of a Map M are colored so that adjacent regions are different , then no more than 4 colors are required.
Every planar graph is 4-colorable (Vertex Coloring) but when a triangle is a graph or sub-graph we need only 3 colors .

Mathematicians had been attempting for years to come up with a sophisticated proof (of four color theorem) along the lines of the Six Color Theorem or the Five Color Theorem, and using the brute force method almost appeared like hacking the process.
Every planar graph can be colored in four different ways.
Vertices and edges are found in graphs. We want adjacent vertices/ regions to be of different colors.

How to color ?
Take any map and divide it into a set of connected regions : R1,R2 … Rn with continuous boundaries.
There must be some way to assign each region Ri  -> in the set {R, G, B, Y}  , such that if two regions Ri and  Rj are “touching” (i.e. they share some nonzero length of boundary between them), they must receive different colors.
Example –
1.. The four-color map is shown below : 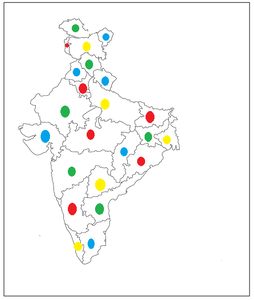 Here, as you can see, every region that touches another region has a different color than the touching one & we required a total of a maximum of four colors to color this map – Red, Green, Blue & yellow.

2. The transformation of an uncolored  Map G into a colored Map is  shown below –

Here you can see that every region that touches another region has a different color than the touching one & we required a total of maximum four colors to color this map – Red, Green, Blue & yellow.

3. The transformation of an uncolored  Map H into a colored Map is  shown below – 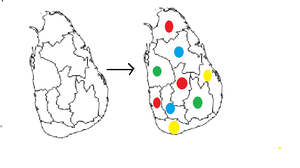 Here also you can see that every region that touches another region has a different color than the touching one & we required a total of a maximum of four colors to color this map – Red, Green, Blue & yellow.

Kuratowski’s Theorem :
Kuratowski established the theorem establishing a necessary and sufficient condition for planarity in 1930. The theorem states that –

To prove this theorem, we’ll go through some definitions and make sure that both K3,3 and K5 are non-planar. Let’s have a look at K3,3.