Force is defined as an external cause that a body experiences as a result of interacting with another body. Whenever two objects interact, a force is exerted on each object. The interaction or the encounter of the two objects ends when the two objects stop feeling any force on each other. Thus, we can say that forces exist when there is an interaction between two objects. Force is an outside factor that has the capability to change the resting or moving state of a certain body. It has size and motion. The force is applied in both a direction and at a point, referred to as the force’s direction and application, respectively. In this way, forces are divided into two Contact and Non-Contact forces, as discussed below. 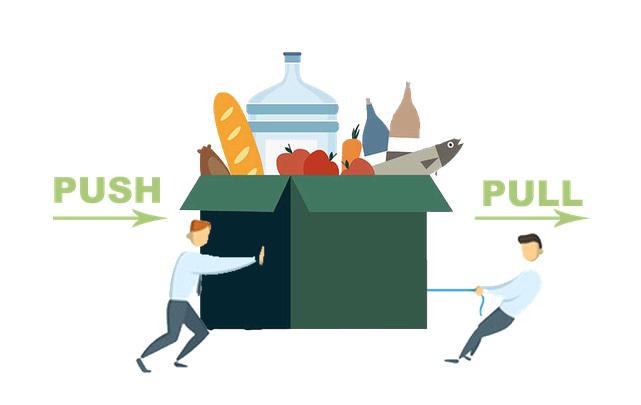 A push or pull of an object is referred to as force in science. Force is created when two things contact. The amount and direction of force are both present. The magnitude of a force is used to represent its strength. A change in the direction or condition of motion of a body is caused by force.

Any external element that has a tendency to change the state of motion or rest, when applied to an object is called force. Force is simply the push or pull upon an object resulting to the interaction between the two objects.

A force can cause an item to move from rest to motion or vice versa. Two or more things must interact with each other for a force to be created. For example, a force is applied by the wind when it propels a sailboat through the water, A force is also present when gravity pulls an apple downward. Things can move, change their speed, or change shape in response to forces.

Force is defined by the vector product of mass m and acceleration a of the object. This can be written as,

Also according to Newton’s Second Law of Motion, force is given by the time rate of change of momentum. Mathematically, it is given as,

is defined as the product of mass and velocity of the object as,

Magnitude and Direction of Force

Furthermore, equal and opposing forces cancel out, thus the resulting force is zero. Force exerted to an item causes a change in velocity as well as a change in shape. Some forces operate on an item by making touch with it, whilst others act without making contact with the object. Touch forces are forces that act when an item comes into contact with them.

A Force can act on an object with or without any contact. For example, if you are pushing or pulling a door then you must have contact with a door while if you have a bar magnet you can easily attract iron nails without having any contact with the nail. So in science, we have two types of forces, one is a contact force and the other is a non-contact force. Let’s see in detail what are they with their examples.

The forces which are applied to other objects only through physical touching are called contact forces.

Examples of contact forces are muscular and frictional forces.

The forces which are applied to other objects without any physical touching are called non-contact forces.

Line of Action of a Force

Galileo used experiments to demonstrate that when there is no external force acting on an object, it moves at a constant speed. He could observe that a sphere’s speed rises as it rolls down an inclined plane because of its gravitational attraction on it.

The net force acting on an object is 0 when all the forces are equal and balanced. A net force acting on a body, however, can change either the magnitude or the direction of its velocity if all of the forces acting on it result in an unbalanced force, which indicates that the unbalanced force can accelerate the body. For instance, when a body is subjected to a number of forces and is determined to be at rest, we can infer that there is zero net force operating on the body.

Example 1: Determine the force of an object with a mass equal to 500 kg and acceleration as 60 m/s2.

According to the force formula,

Substituting the given values,

The acceleration of the box, a is 5 m/s2

According to the force formula,

Substituting the given values,

Question 1: Which force is responsible for a charged balloon attracting another balloon?

Question 2: Which is the weakest force in nature?

Gravitational Force is the weakest among all the four fundamental forces.

Question 3: Does a force always result in motion?

No, force never has to reverse the direction of a motion. For instance, moving a wall won’t change how it moves, etc.

Question 4: Is force a scalar quantity?

Force is not a scalar quantity. Since it has both direction and magnitude. Therefore, force is a vector quantity.

Question 5: An apple falls from the tree, which force is responsible for these phenomena? Define it.

Question 6: What is the net force? Explain with the help of an example.

The total of all the forces acting on a body is called the net force. For example, if we are pushing a heavy box in the same the direction the resultant force will be added and the box will move easily, while if two-person pushing the same box in an opposite direction then it gets difficult as the resultant forces acting on the force will be the difference between the two forces.

Mathematically we can write,

Fnet = F1+ F2 (when force applying in the same direction).