While traversing the linked list one of these things will occur- 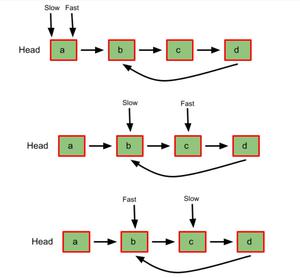 Below is the C++ program to implement the above approach:

Why Does Floyd’s Algorithm Works?

Let us consider an example:

X = Distance between the head(starting) to the loop starting point.

Y = Distance between the loop starting point and the first meeting point of both the pointers.

C = The distance of the loop

We can say that,

Where K is some positive constant.

Below is the C++ program to implement the above approach-

Time complexity: O(n), as we have traversed the loop once and then traveled X distance.
Auxiliary space: O(1), as only pointers are used therefore constant space complexity.