A basic block is a simple combination of statements. Except for entry and exit, the basic blocks do not have any branches like in and out. It means that the flow of control enters at the beginning and it always leaves at the end without any halt. The execution of a set of instructions of a basic block always takes place in the form of a sequence.

The first step is to divide a group of three-address codes into the basic block. The new basic block always begins with the first instruction and continues to add instructions until it reaches a jump or a label. If no jumps or labels are identified, the control will flow from one instruction to the next in sequential order.

The algorithm for the construction of the basic block is described below step by step:

Algorithm: The algorithm used here is partitioning the three-address code into basic blocks.

Input: A sequence of three-address codes will be the input for the basic blocks.

Output: A list of basic blocks with each three address statements, in exactly one block, is considered as the output.

Method: We’ll start by identifying the intermediate code’s leaders. The following are some guidelines for identifying leaders:

This represents a basic block in which all the statements execute in a sequence one after the other.

Let us understand the construction of basic blocks with an example:

Using the algorithm given above, we can identify the number of basic blocks in the above three-address code easily-

There are two Basic Blocks in the above three-address code:

Transformations on basic blocks can be applied to a basic block. While transformation, we don’t need to change the set of expressions computed by the block.

There are two types of basic block transformations. These are as follows:

Structure preserving transformations can be achieved by the following methods:

In the case of algebraic transformation, we basically change the set of expressions into an algebraically equivalent set.

For example, and expression

This can be eliminated from a basic block without changing the set of expressions.

Let’s make the flow graph of the example that we used for basic block formation: 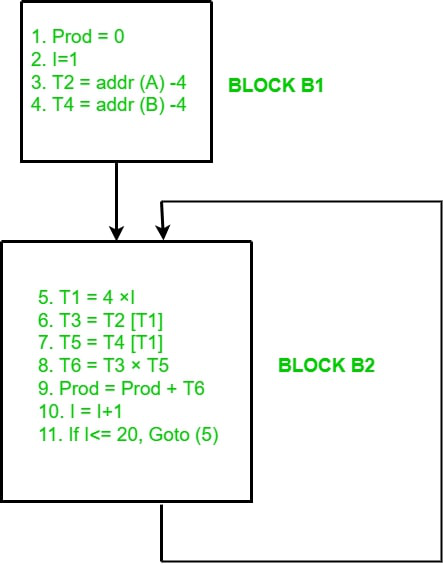 Flow Graph for above Example

Firstly, we compute the basic blocks (which is already done above). Secondly, we assign the flow control information.