FLEX (fast lexical analyzer generator) is a tool/computer program for generating lexical analyzers (scanners or lexers) written by Vern Paxson in C around 1987. It is used together with Berkeley Yacc parser generator or GNU Bison parser generator. Flex and Bison both are more flexible than Lex and Yacc and produces faster code.
Bison produces parser from the input file provided by the user. The function yylex() is automatically generated by the flex when it is provided with a .l file and this yylex() function is expected by parser to call to retrieve tokens from current/this token stream.

Note: The function yylex() is the main flex function that runs the Rule Section and extension (.l) is the extension used to save the programs.

Note: If Update command is not run on the machine for a while, it’s better to run it first so that a newer version is installed as an older version might not work with the other packages installed or may not be present now.

Given image describes how the Flex is used:

Step 1: An input file describes the lexical analyzer to be generated named lex.l is written in lex language. The lex compiler transforms lex.l to C program, in a file that is always named lex.yy.c.
Step 2: The C compiler compile lex.yy.c file into an executable file called a.out.
Step 3: The output file a.out take a stream of input characters and produce a stream of tokens.

In the input file, there are 3 sections:

2. Rules Section: The rules section contains a series of rules in the form: pattern action and pattern must be unintended and action begin on the same line in {} brackets. The rule section is enclosed in “%% %%”.

Examples: Table below shows some of the pattern matches.

3. User Code Section: This section contains C statements and additional functions. We can also compile these functions separately and load with the lexical analyzer.

Step 1: lex filename.l or lex filename.lex depending on the extension file is saved with
Step 2: gcc lex.yy.c
Step 3: ./a.out
Step 4: Provide the input to program in case it is required

Note: Press Ctrl+D or use some rule to stop taking inputs from the user. Please see the output images of below programs to clear if in doubt to run the programs.

Example 1: Count the number of characters in a string 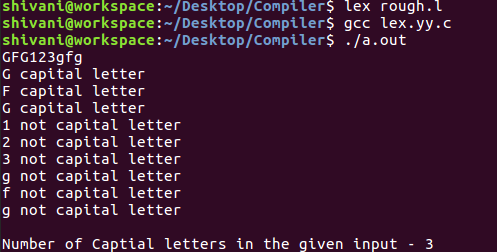 Example 2: Count the number of characters and number of lines in the input

Previous
C program to detect tokens in a C program
Next
Classification of Context Free Grammars
Related Articles
1. Working of Lexical Analyzer in compiler
2. Lexical Error
3. Introduction of Lexical Analysis
4. Lexical Analysis and Syntax Analysis
5. How to Install Flex on Windows?
6. Issues in the design of a code generator
7. Simple Code Generator
8. Issues, Importance and Applications of Analysis Phase of Compiler
9. Why is arr[i] == i[arr] ?
10. Loader in Compiler Design
Article Contributed By :