Introduction :
A transaction is a series of object operations that must be done in an ACID-compliant manner.

Various roles are allocated to running a transaction successfully :

FLAT TRANSACTIONS :
A flat transaction has a single initiating point(Begin) and a single end point(Commit or abort). They are usually very simple and are generally used for short activities rather than larger ones.
A client makes requests to multiple servers in a flat transaction. Transaction T, for example, is a flat transaction that performs operations on objects in servers X, Y, and Z.
Before moving on to the next request, a flat client transaction completes the previous one. As a result, each transaction visits the server object in order.
A transaction can only wait for one object at a time when servers utilize locking. 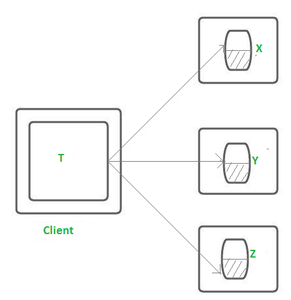 Limitations of a flat Transaction : 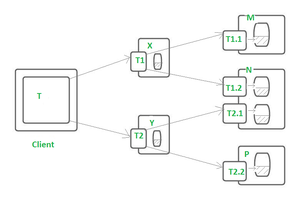 Consider a distributed transaction (T)  in which a customer transfers :

It can be viewed/ thought of as :

Advantage :
The  performance is higher than a single transaction in which four operations are invoked one after the other in sequence. 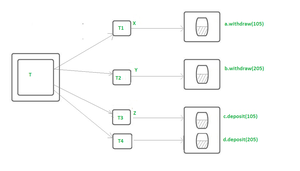 So, the Transaction T may be divided into sub-transactions as :