The Binary Point: Fractional values such as 26.5 are represented using the binary point concept. The decimal point in a decimal numeral system and a binary point are comparable. It serves as a divider between a number’s integer and fractional parts.

A “binary point” can be created using our binary representation and the same decimal point concept. A binary point, like in the decimal system, represents the coefficient of the expression 20 = 1. The weight of each digit (or bit) to the left of the binary point is 20, 21, 22, and so forth. The binary point’s rightmost digits (or bits) have weights of 2-1, 2-2, 2-3, and so on.

For illustration, the number 11010.12 represents the value:

When an integer is shifted right by one bit in a binary system, it is comparable to being divided by two. Since we cannot represent a digit to the right of a binary point in the case of integers since there is no fractional portion, this shifting operation is an integer division.

How to write Fixed Point Number?

Understanding fixed point number representation requires knowledge of the shifting process described above. Simply by implicitly establishing the binary point to be at a specific place of a numeral, we can define a fixed point number type to represent a real number in computers (or any hardware, in general). Then we will just use this implicit standard to express numbers.

Two arguments are all that are required to theoretically create a fixed point type:

For example, fixed<8,3> signifies an 8-bit fixed-point number, the rightmost 3 bits of which are fractional.

Representation of a real number:

Negative integers in binary number systems must be encoded using signed number representations. In mathematics, negative numbers are denoted by a minus sign (“-“) before them. In contrast, numbers are exclusively represented as bit sequences in computer hardware, with no additional symbols.

Signed binary numbers (+ve or -ve) can be represented in one of three ways:

Consider the number -2.5, fixed<w,b> width = 4 bit, binary point = 1 bit (assume the binary point is at position 1). First, represent 2.5 in binary, then find its 2’s complement and you will get the binary fixed-point representation of -2.5. 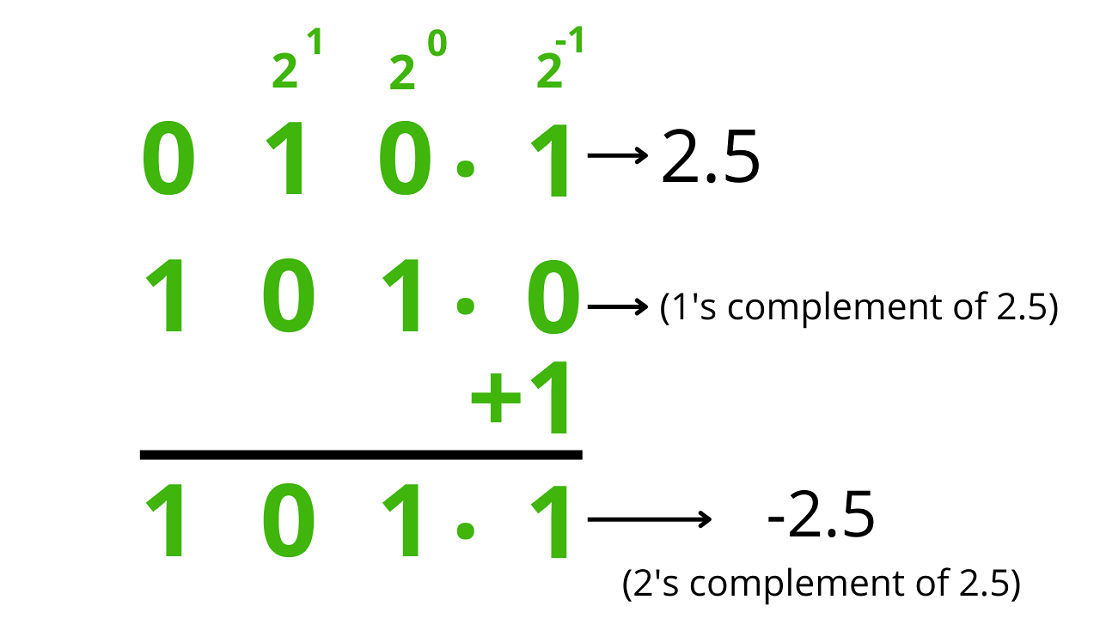 One bit is essentially used as a sign bit for 1’s complement numbers, leaving you with only 7 bits to store the actual number in an 8-bit number.

Therefore, the biggest number is just 127 (anything greater would require 8 bits, making it appear to be a negative number).

Additionally, one bit in 2’s complement numbers is effectively used as a sign bit, leaving you with only 7 bits to store the actual number in an 8-bit integer.