Finding the vertex, focus and directrix of a parabola

Problem – Find the vertex, focus and directrix of a parabola when the coefficients of its equation are given.
A set of points on a plain surface that forms a curve such that any point on that curve is equidistant from the focus is a parabola.
Vertex of a parabola is the coordinate from which it takes the sharpest turn whereas a is the straight line used to generate the curve. 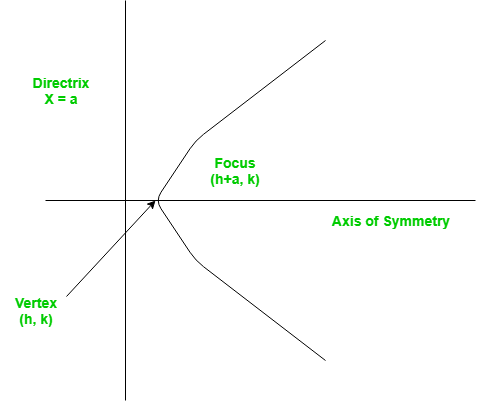 The standard form of a parabola equation is

. Given the values of a, b and c; our task is to find the coordinates of vertex, focus and the equation of the directrix.
Example –

This problem is a simple example of implementations of formulae. Given below are the required set of formulae which will help us tackle the problem.

Previous
Rotation of a point about another point in C++
Next
Find mirror image of a point in 2-D plane
Related Articles
1. Equation of parabola from its focus and directrix
2. Equation of ellipse from its focus, directrix, and eccentricity
3. Area of a triangle with two vertices at midpoints of opposite sides of a square and the other vertex lying on vertex of a square
4. Find vertex coordinates of all possible rectangles with a given vertex and dimensions
5. Check if every vertex triplet in graph contains two vertices connected to third vertex
6. Find the vertex diagonally opposite to the vertex M from an N-sided polygon
7. Satisfy the parabola when point (A, B) and the equation is given
8. Check if a point is inside, outside or on the parabola
9. Program to find the length of Latus Rectum of a Parabola
10. Length of diagonals of a Rhombus using length of Side and vertex Angle
Article Contributed By :