Find a pair with given sum in BST

Given a BST and a sum, find if there is a pair with the given sum. 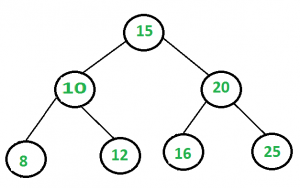 Recommended: Please solve it on “PRACTICE” first, before moving on to the solution

Pair with given sum using Hashing

The idea is based on Hashing. We traverse binary search tree by inorder way and insert node’s value into a set. Also check for any node, difference between given sum and node’s value in set, if it is found then pair exists otherwise it doesn’t exist.

Follow the steps mentioned below to implement the idea:

Pair with a given sum using Two pointers

The main idea is to find the Inorder Traversal of the BST and store it in a vector. We know that Inorder tarversal of BST will be in sorted order.Now we will Apply Two pointers Technique to find that whether there exist two elements in the vector that sums up to the given value.

1. First find the Inorder traversal of the Given BST and store it in a vector  (Let v).

Now, if sum of elements at the ith index and jth index is greater that the given element then decrement j,

if sum of elements at the ith index and jth index is less that the given element then increment i,

else, these two elements are our required answer.

Previous
K'th smallest element in BST using O(1) Extra Space
Next
Lowest Common Ancestor in a Binary Search Tree.
Related Articles
1. Find a pair with given sum in a Balanced BST
2. Find k-th smallest element in BST (Order Statistics in BST)
3. Pair with a given sum in BST | Set 2
4. K'th Largest Element in BST when modification to BST is not allowed
5. Convert a normal BST to Balanced BST
6. Two nodes of a BST are swapped, correct the BST
7. Pair with given product | Set 1 (Find if any pair exists)
8. Pair with minimum absolute difference in BST
9. Find all the pairs with given sum in a BST | Set 2
10. Pair formation such that maximum pair sum is minimized
Article Contributed By :

Prepare for Amazon & other Product Based Companies