What are Financial Statements?

The accounting process ends with the preparation of the financial statement. The information about the financial position of any company is provided with the help of Financial Statements. The main objective of preparing the financial statement is to present a true and fair view of the financial performance and position. Accounting data is summarised in such a way that the profitability of the business is clearly visible. Financial Statements also serve as an information tool for all the parties concerned with the firm. To guarantee consistency in reporting, these statements; which include an income statement, Balance Sheet, and statement of cash flows, must be prepared in accordance with predetermined and established accounting principles and conventions. 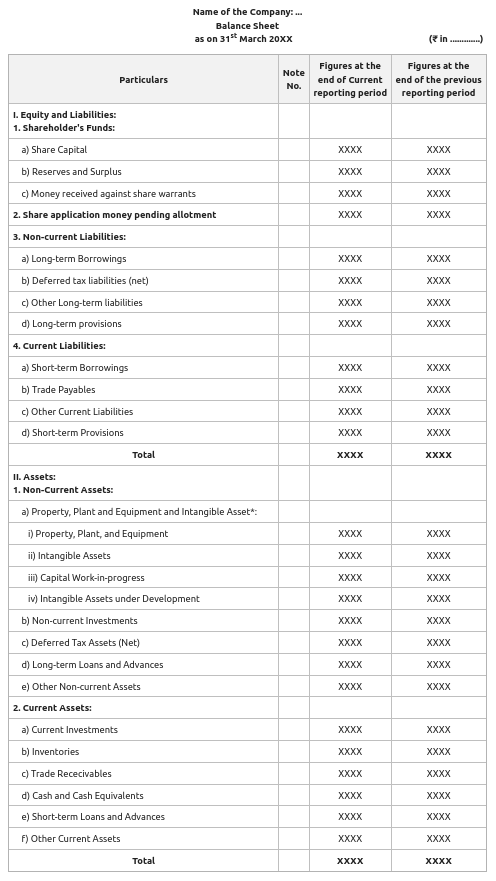 1. The total of each of the sub-items of Equity and Liabilities is directly written in the Balance Sheet, and its detail is shown in Notes to Accounts.

I. Items appearing under the head of Equity and Liabilities:

(A) Share Capital: Under this head, some of the important items are:

The disclosure of Share Capital in the Balance Sheet is limited to the following items: 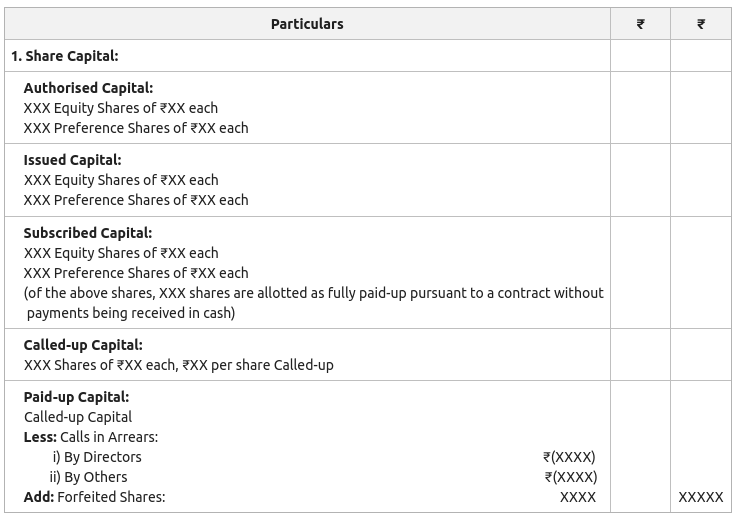 2. If the question doesn’t say anything about authorised/issued capital, it has to be shown in the notes to accounts. However, no figures will be shown as shown above.

(B) Reserve and Surplus: Under this head, the following items are shown:

Securities Premium Reserve will be used to write off the items mentioned under Section 52 of the Companies Act 2013 and the balance, if any, will be shown under this head.

According to Section 52 of the Companies Act, 2013, the amount of Securities Premium can be used for the following purposes:

(C) Money received against Share Warrants**: A financial instrument that is issued by a public company and gives the holder of the share, the right to acquire a certain number of equity shares specified therein at a later date. The amount received against share warrants is shown in shareholder’s funds as on a specified date, these will be converted into equity shares at a pre-determined price. However, the warrants are not shown as a part of the share capital but as a separate line item.

(A) Short-term Borrowings: It includes Loans repayable on demand from banks and other parties, Loans and Advances from Related Parties, Deposits, etc.

(B) Trade Payables: It refers to the amount due on the account of goods purchased or services received by the company in the normal course of business.

(C) Other Current Liabilities: These include Unpaid Dividends, Income Received in Advance, Interest Accrued and due/not due on Borrowings, Calls in Advance and interest thereon, etc.

II. Items appearing under the head of Assets:

(A) Property, Plant and Equipment, and Intangible Assets: The assets which are held by the company for increasing its earnings instead of the purpose of sale are included under this head. These assets are used by the company for a long time to earn profit and are categorised as follows:

(D) Long-term Loans and Advances: The loans and advances which are expected to be received back in cash or kind; i.e., in the form of assets after the period of the Operating Cycle from the date of the Balance Sheet or after 12 months. These are classified into two categories:

(B) Inventories: The stock held by the company for the purpose of trade in their ordinary course of business is covered under Inventories. In simple terms, stock held for manufacturing or trading goods and converted into Cash and Cash Equivalents within a short period are classified as Current Assets. It consists of Work-in-Progress, Raw Materials, Finished Goods, Stock-in-Trade, Loose Tools, etc.

(C) Trade Receivables: The amount receivable against the sale of goods or services that are rendered by the company in their normal course of business are covered under Trade Receivables. If the amount is receivable within a period of 12 months or within the period of the Operating Cycle from the date of the Balance Sheet, they are shown as current assets. Trade Receivables of a company consist of both Debtors and Bills Receivable.

Provision for Doubtful Debts: It is a provision made by the company to meet the expected loss of bad debts of a company. It is shown under the relevant head separately and leads ti two approaches as follows:

(E) Short-term Loans and Advances: The loans and advances, which are expected to be realised within 12 months or the period of the Operating Cycle from the date of the Balance Sheet, whichever is more.

(A) Contingent Liabilities: The liabilities which may or may not arise because of their dependency on the event happening in the future are known as Contingent Liabilities. For example, if there is a claim filed against the company in court, then the court may hold the company innocent or guilty. Now, the liability of the company depends on the court’s order. Therefore, it is a contingent liability. Besides, the Proposed Dividend is also shown as a contingent liability of the company because it depends upon the approval of shareholders, who may or may not reduce the amount of dividend to be paid [AS-4 (Revised)].

Note: Contingent Liability is not shown in the Books of Accounts of the Company. However, it is disclosed in Notes to Accounts to provide information to the users. It is classified into the following:

(B) Commitments: It is the financial commitment made because of the activities agreed to by the company that it has to undertake in the future. Commitments are classified as follows:

Estimated amounts of contracts remaining to be executed on Capital Account and not provided for Uncalled liability on shares and other investments partly paid, and Other commitments (Nature to be specified).