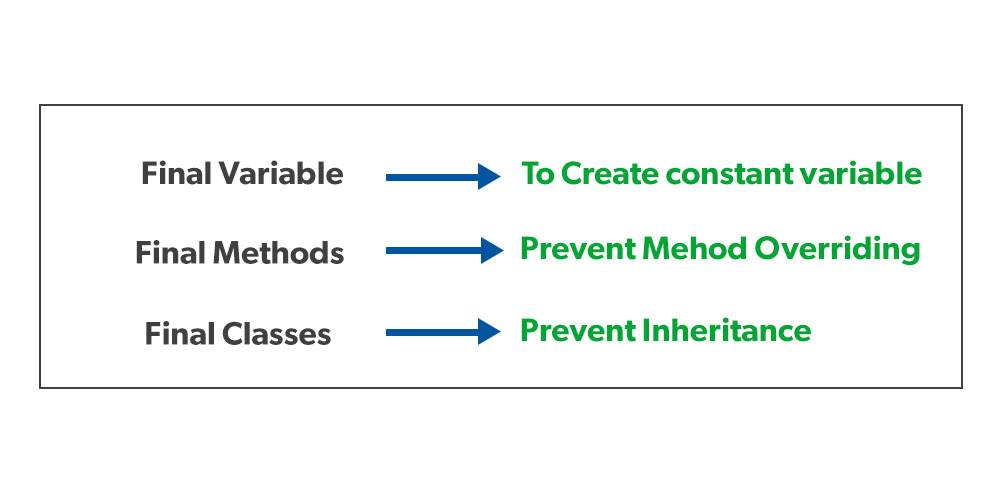 When a variable is declared with the final keyword, its value can’t be modified, essentially, a constant. This also means that you must initialize a final variable. If the final variable is a reference, this means that the variable cannot be re-bound to reference another object, but the internal state of the object pointed by that reference variable can be changed i.e. you can add or remove elements from the final array or final collection. It is good practice to represent final variables in all uppercase, using underscore to separate words.

Let us see these two different ways of initializing a final variable:


Geeks there was no main method in the above code as it was simply for illustration purposes to get a better understanding in order to draw conclusions:

Observation 1: When to use a final variable?

As we all know that a final variable cannot be re-assign. But in the case of a reference final variable, the internal state of the object pointed by that reference variable can be changed. Note that this is not re-assigning. This property of final is called non-transitivity. To understand what is meant by the internal state of the object as shown in the below example as follows:

The non-transitivity property also applies to arrays, because arrays are objects in Java. Arrays with the final keyword are also called final arrays.

Note: As discussed above, a final variable cannot be reassign, doing it will throw compile-time error.

Remember the below key points as perceived before moving forward as listed below as follows:

Output explanation: Since the “i” variable goes out of scope with each iteration of the loop, it is actually re-declaration each iteration, allowing the same token (i.e. i) to be used to represent multiple variables.

When a class is declared with final keyword, it is called a final class. A final class cannot be extended(inherited).

There are two uses of a final class:

Usage 1: One is definitely to prevent inheritance, as final classes cannot be extended. For example, all Wrapper Classes like Integer, Float, etc. are final classes. We can not extend them.

Usage 2: The other use of final with classes is to create an immutable class like the predefined String class. One can not make a class immutable without making it final.

When a method is declared with final keyword, it is called a final method. A final method cannot be overridden. The Object class does this—a number of its methods are final. We must declare methods with the final keyword for which we are required to follow the same implementation throughout all the derived classes.

Illustration: Final keyword with a method

For more examples and behavior of final methods and final classes, please see Using final with inheritance. Please see the abstract in java article for differences between the final and abstract.
Related Interview Question(Important): Difference between final, finally, and finalize in Java

This article is contributed by Gaurav Miglani. If you like GeeksforGeeks and would like to contribute, you can also write an article using write.geeksforgeeks.org or mail your article to review-team@geeksforgeeks.org. See your article appearing on the GeeksforGeeks main page and help other Geeks. Please write comments if you find anything incorrect, or you want to share more information about the topic discussed above.