Figures on the Same Base and between the Same Parallels

A triangle is a three-sided polygon and a parallelogram is a four-sided polygon or simply a quadrilateral that has parallel opposite sides. We encounter these two polynomials almost everywhere in our everyday lives. For example: Let’s say a farmer has a piece of land that is in the shape of a parallelogram. He wants to divide this land into two parts for his daughters. Now when divided into two parts, it will generate two triangles. So, in this case, it becomes essential for us to know their areas. Simple formulas to calculate the areas of triangles and parallelograms can be sometimes cumbersome. So, we use some theorems and properties to simplify our calculations in such scenarios. Let’s look at these properties in detail.

Congruent Figures and Their Areas

In the above figure, let’s compare the areas of two quadrilaterals.

Notice that both have the same area, but they are not congruent. This verifies that the converse of our statement that we gave earlier is not true. So, now the definition of the area can be summarized as follows,

Area of a figure is the measure of the plane that is enclosed by that figure. It has following two properties:

Parallelograms on the same Base and Between the Same Parallels

Theorem: Parallelograms with the same base and between the same parallels have the same area.

Let’s assume we have two parallelograms PQRS and RSTU as shown in the figure below. Both have the same base RS and are between same parallels. The objective is to prove that ar(PQRS) = ar(RSTU). 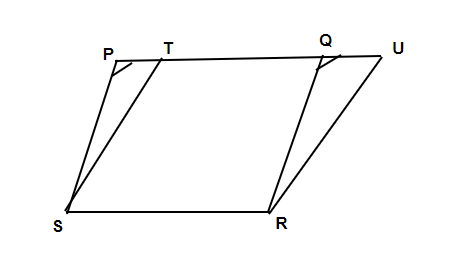 Let’s look at the triangle PST and QRU.

Now since two angles of triangles are equal, the third angle will also be equal due to angle sum property.

Now both of these triangles are congruent

Now we know that,

Triangles on the same Base and Between the Same Parallels 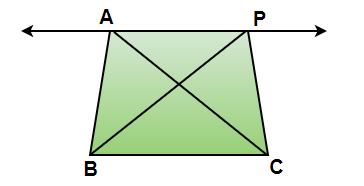 Theorem: Two triangles on the same base and between the same parallels have equal area. 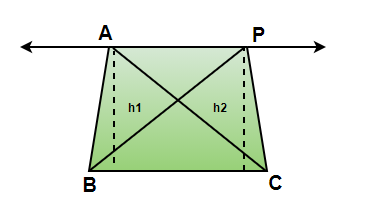 We know that area of triangle is given by

So, two triangles will have same area if they have same base and height.

Question 1: Find the area of the triangle and parallelogram given in the figures below. 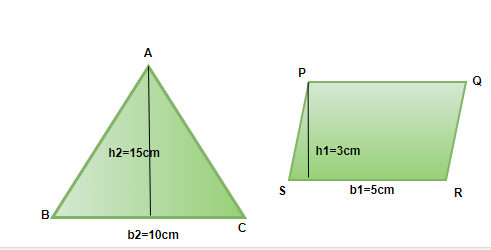 Question 3: In the triangle ΔPQR given in the figure below, PS is the median. Prove that ar(PSR) = ar(PQS). 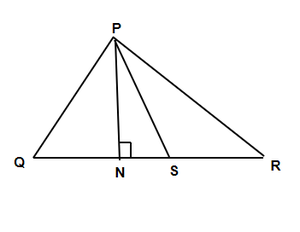 Now if we draw a perpendicular from the vertex P to the base QR. We’ll see that this perpendicular is common to both the triangle. Thus, both of them have same base and same height. So, they must have the same area.

Question 4: In the figure given below, we have a rectangle RSTU and a parallelogram PQRS. It is given that, PL is perpendicular to RS. Now, prove: 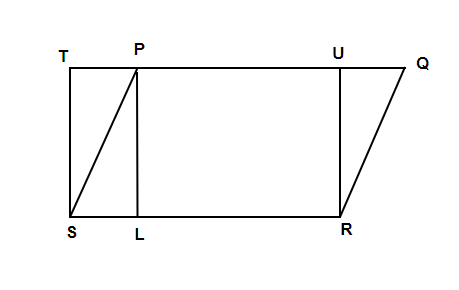 1. We know that rectangles are also parallelograms. So, the theorem we studied also apply on the rectangle. Both of these figures have same base and lie between same parallels. Thus, both should have the same area.

2. The area of parallelogram = base x height.

Since, PURL is also a rectangle, RU = AL. Thus,

Question 5: A farmer has a field that is in the shape of a parallelogram PQRS. The farmer takes a point on RS and joins it to P, Q. Answer the following questions: 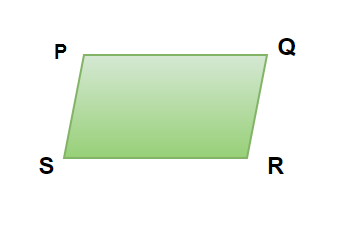 1. Let the point farmer chose to be X. Join X to P and Q. This divides the field into three parts. 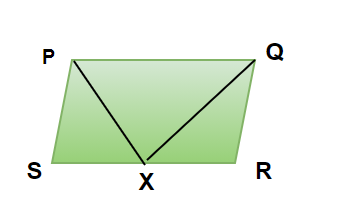 2. Now, we know that the if a triangle and a parallelogram have same base and are in between same parallels. Then, area of triangle is half of the area of the parallelogram.

So, the remaining two portions must make the other half of the area. That means,

So, he should grow one crop in XPQ and other crop in both XPS and XQR.