Every living organism on earth breathes, including plants, animals, and microbes. The breaking of C-C bonds of the complex compounds through oxidation in the cell, to release energy, is called respiration. Cellular respiration in plants is the process of the breakdown of bond materials within the cell to produce energy, and the use of this energy for the synthesis of ATP. The breakdown of these complexes occurs in the cytoplasm and mitochondria. The compounds that are oxidized during the process are known as respiratory substrates. Usually, carbohydrates are oxidized, but protein, fats, and organic acids are also used as respiratory substrates in some plants under certain conditions. The energy contained in the respiratory substrate is released in a slow stepwise reaction controlled by the enzymes and is stored in the form of ATP. The energy released by oxidation in respiration cannot be directly used but is used to synthesize ATP, which is broken down whenever there is a need for energy. Hence, ATP is used as the energy currency of cells. This energy stored in ATP is used in various functions of cells.

Plants, require O2 for respiration, and they give out CO2. Unlike animals, they do not have special organs for the exchange of gases. Plants have stomata and lenticels that ensure the availability of O2. Each plant part takes care of its own gas need, there is very little gas exchange between the parts of plants. Plants do not possess much need for gas exchange, roots and stems respire at much lower rates than animals. Gases exchange occurs only during photosynthesis, and each leaf is adapted to take care of its own needs during this period. O2 is released within the cell. The distance that gases must diffuse in plants is less. Each living cell in plants is located close to the surface of the plant. The living cell is arranged inside and beneath the bark. They have openings called lenticels. Thus, most plant cells have at least a part of their surface in contact with the air.

This term is often used in connection with higher organisms where it occurs in the roots of some water-logged plants, and muscles of animals and as a supplementary mode of respiration in massive tissues. It is the exclusive mode of respiration in some parasitic worms and microorganisms. In microorganisms, the term fermentation is more commonly used where anaerobic respiration is known after the name of products like alcoholic fermentation, and lactic acid fermentation. In some cases, carbon dioxide is evolved. It gives a frothy appearance(L.fermentum – to boil). Buchner found that fermentation could be caused without the living yeast cells by grinding them under pressure and mixing the extract with a sugary solution. The enzyme present in the extract is named zymase. Because of the latter, fermentation is also called zymosis.

Fermentation is the anaerobic breakdown of carbohydrates and other organic compounds into alcohols, organic acids, gases, etc. with the help of micro-organisms or their enzymes.

Fermentation takes place under anaerobic conditions in many prokaryotes and unicellular eukaryotes. In this process, under anaerobic conditions (absence of oxygen) the pyruvic acid which is obtained from incomplete oxidation of glucose is converted into CO2 and ethanol. Fermentation results in a partial breakdown of glucose. Lactic acid is also produced from pyruvic acid due to some bacteria. The enzymes, pyruvic acid decarboxylase, and alcohol dehydrogenase are used as catalysts in these reactions. The pyruvic acid is reduced to lactic acid by lactate dehydrogenase. In this reaction, the reducing agent NADH+H+ is reoxidized to NAD+. The energy released during the lactic acid and alcohol fermentation is low (2 ATP molecules), which is very less compared to the reaction of glucose in glycolysis. These processes are hazardous, either acid or alcohol is produced as end products. 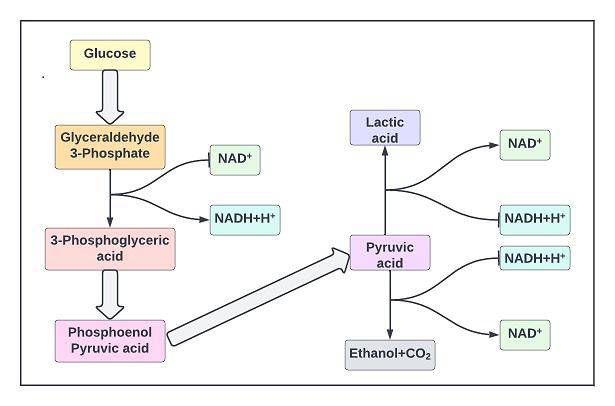 Question 1: What is the net ATP that is synthesized when one molecule of glucose is fermented to alcohol or lactic acid?

When Glucose is fermented, there is a net gain of 2 ATP during the glycolysis process, in this process, glucose is first converted into pyruvates and then to lactic acid or alcohol. 2-pyruvates, 2-ATP, and 2-NADH are produced during glycolysis. It is the same for alcoholic, lactic acid, and acetic acid fermentation.

Question 2: Explain the Significance of Fermentation.

Fermentation is mainly and widely used in industries. Microorganisms like yeast and bacteria are used in large numbers. In the food industry fermentation plays a major role, preparation of bread, biscuits, and cakes requires fermentation.

Question 3: How does Glycolysis differ from Fermentation?

Question 4: Why is fermenting of food required?

Fermentation helps in improving the shelf life of any food or vegetable and allows it to stand for long period of time. Fermented food is more beneficial to our body and nutritionally dense as compared to normal or unfermented food.

Question 5: How is pickling different from Fermentation?

Pickles are generally obtained by using a pickling liquid made with vinegar, salt, sugar, oil, herbs, and spices, and heating it with vegetables, later it is placed in jars and left for a certain amount of time. In this process, there is no involvement of fermentation.

Fermenting vegetables or (maybe fruits) is a process where a suitable environment is created for good bacteria to grow. After that, they are transmuted into the living food full of probiotics.

Previous
Describe any three characteristics of 'Odisha Jharkhand belt' of Iron Ore in India
Next
Slime Moulds
Related Articles
1. What are Chain or Multiple Stores?
2. What are Departmental Stores?
3. Public Deposits: Advantages and Disadvantages
4. What is Internal Trade?
5. What is Dihybrid Cross?
6. Chrysophytes
7. Cyclic and Non-cyclic Photo-phosphorylation
8. Where are the Atp and Nadph Used?
9. Phloem Transport
10. Glycolysis
Article Contributed By :