National Income is the aggregate value of all goods and services produced by firms in a given financial year. It can be stated that when the aggregate revenue generated by the firms is paid out to factors of production, it equals aggregate income or National Income. The National Income can be calculated by using either of the three methods: Value-added or Product Method, Income Method and Expenditure Method.

According to Marshall, “The labor and capital of a country acting on its natural resources produce annually a certain net aggregate of commodities, material and immaterial, including services of all kinds. This is the true net annual income or revenue of the country or national dividend.”

The total value of all the goods & services produced in a country during a particular year is known as its gross domestic product.

It also includes the country’s net income arising from abroad. Four primary constituents of GNP are:

In this method, the income is calculated as the aggregate of all expenditures incurred by households, firms, government, and foreigners. It is assumed that all the factor income earned is spent in the form of expenditure incurred in the production of the goods and services, and circulated by the businesses in an economy. Therefore, the total final expenditure incurred is the Gross Domestic Product at Market Price. It is often known as the Income Disposable Method.

The different components of final expenditure are as follows:

It is a summation of the total final household consumption expenditure and final consumption expenditure of other private non-profit institutions on various types of consumer goods and services, including durable (except houses, as any expenditure incurred on the purchase or construction of houses occupied by owners comes under Gross Residential Construction Investment as Capital Formation), non-durable, semi-durable goods and services. It also includes all the domestic and international expenditures incurred by citizens of a country. This means that if a resident of India consumes anything even on foreign land, it will be added up in this component of expenditure, whereas consumption by a foreigner on Indian land will be subtracted from PFCE.

The government spends fortunes on the development and maintenance of various administrative and infrastructural services like defense, education, roads, law and order, as well as on various welfare schemes. Thus, this component measures the expenditure incurred by the government of an economy on these services for its functioning.

It refers to the expenditure incurred in the purchase or addition of capital stock of an economy by the production unit. It is viewed as an investment made by the production firms on the domestic territory; therefore, often referred to as Gross Investment. It is further sub-divided into two components namely, Gross Fixed Capital formation and Inventory Investment.

Gross Fixed Capital Formation (GFCF) is the expenditure borne in acquiring fixed assets, such as machinery and equipment for any production unit (Gross Business Fixed Investment). It also includes expenditure incurred in purchasing a new house by the household (Gross Residential Construction Investment) and in generating public investments, like in the construction of roads, bridges, railways, etc., by the government (Gross Public Investment). Inventory Management is the change in the stock of finished and semi-finished goods. It is viewed as an investment as the good has been produced but has not yet been consumed.

An economy often trades goods through exports and imports with other economies to take comparative advantage and promote healthy market competition. Net export is derived as the difference between the export and import of an economy for a given year. Exports (X) are the foreign expenditure on the consumption of domestic goods, and since they are produced on domestic land, it is added to the total output. Imports (M) are the domestic expenditure incurred from the consumption of foreign goods, as it is produced on foreign land, they must be excluded from the total output of the domestic economy.

Therefore, after the addition of these components, the GDP at market prices will be calculated as follows:

The National Income can be calculated by following given four steps:

The first step of the Expenditure Method is the identification of economic units operating within the country, which incur the cost of production, namely households, business firms, government and foreign trade.

Now, calculate Domestic Income (NDPFC). For the calculation of domestic income, the value of depreciation and net indirect tax is subtracted from the Gross Domestic Product at Market Price (GDPMP).

The final step is to calculate Net Factor Income from Abroad (NFIA) to get National Income.  NFIA is added with the domestic income of the country.

NFIA or National Foreign Income from Abroad is the factor income received from a foreign economy for using our factor services, excluding the factor income paid to foreigners. It is different from net exports, i.e., a difference between any country’s export and import. 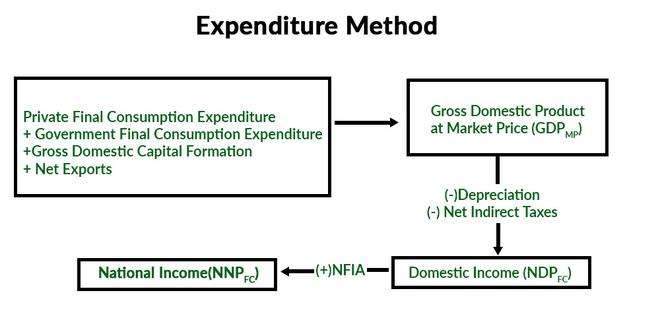 1. Expenditure on Intermediate Goods will not be included: To avoid double-counting, expenditure on intermediate goods and purchase of second-hand goods are not taken into account in the calculation of National Income using this method, as they do not contribute to the current circular flow of goods and services.

2. Purchase of Financial Assets will not be included: Procurement of financial assets like debts, bonds, etc., will not be included as they are a mere tool and not an actual physical good; therefore, they not contributing in any way to the flow of goods and services. However, any brokerage or commission on the sale or purchase of such kinds of financial statements is included in the National Income, as it is a productive service.

3. Transfer Payments are not included: Since transfer payments do not create any value addition in the economy, nor is it connected to any production activity, it is not included in the National Income calculation.