Docker as a platform provides the ability to package, ship, and run an application in an isolated environment called a container. This isolation allows running many containers simultaneously on a given host. Containers are lightweight and contain everything needed to run the application and no need to rely on what is currently installed on the host. It can also be easily shared while you work and be sure that everyone with whom we share gets the same container that works in the same way.

This article focuses on discussing how to use the predefined docker environment to run a sample C program step by step.

We will write a C program (dockerworld.c) which would be an application that can be run anywhere,

Here is the dockerfile to compile a C program.

Now let’s try to understand each line in the dockerfile before creating an image out of it,

1. FROM: We are using the default image developed by Docker Hub for GCC.

2. COPY all the local files directly into /DockerWorld inside the docker environment.

3. WORKDIR to set the current directory so that when the container runs, it knows the path from where to start the application.

4. RUN to start the compilation of the C program dockerworld.c

5. CMD to instruct the docker to run the compiled version of C program once the container runs.

The docker image needs to be built from the dockerfile. 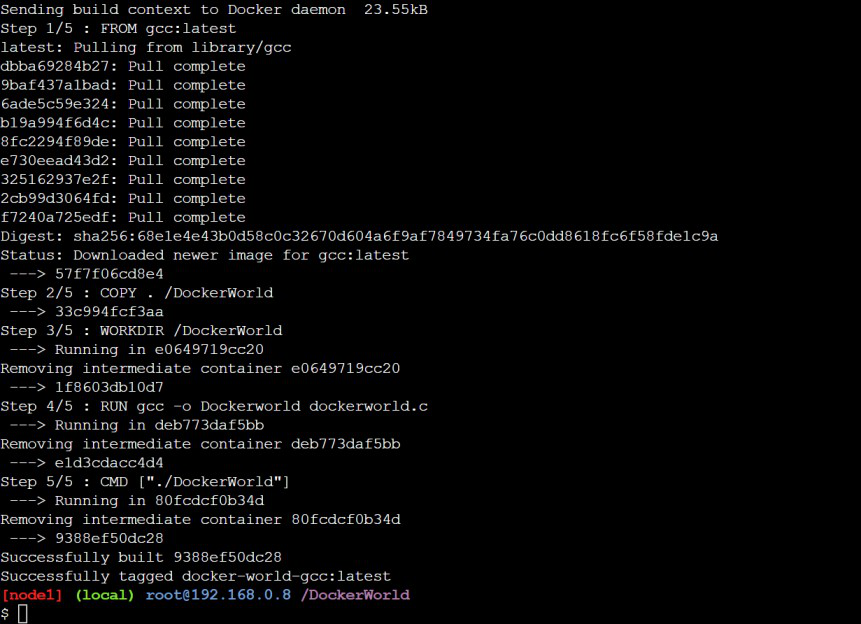 Once the image is built successfully, it can be checked in the docker image command,

Now run the container in interactive mode using the image built from GCC.

The program now lives within an isolated layer on our local machine running docker inside an environment that compiles and runs GCC.

An image has been created in a host named node1, pushed to a docker hub, and ran the container in another host named node2. Please refer to docker push for steps to push an image to the docker hub.