In this article, we will look at how we can analyze the ordering of events in a distributed system. As we know a distributed system is a collection of processes that are separated in space and which can communicate with each other only by exchanging messages this could be processed on separate computers or it could even be multiple processes within the same computer.

A defining characteristic is that the delay of transmitting a message is not negligible compared to the time between events in a single process. There is a fundamental limitation when it comes to ordering events in a distributed system and that is sometimes it is simply not possible to tell if one event occurred before another one if you take the complete set of events within a distributed system.

We can only at best define a partial ordering within those events or an intuitive understanding of the ordering of events is naturally associated with the time at which events occur.

However, in a distributed system we cannot count on physical clocks even if the computers themselves have physical clocks, because two clocks on two different systems can never be perfectly synchronized they will always, in reality, be some drift between any two physical clocks.

So, mostly physical time is ignored when it comes to ordering events within a distributed system, events are only observable within a system.

Now observable events are primarily sending and receiving of messages.

We are assuming that a single process is completely sequential in that we can take all the events within a single process and totally order them. So that we get the exact sequence in which those events occurred within that process. 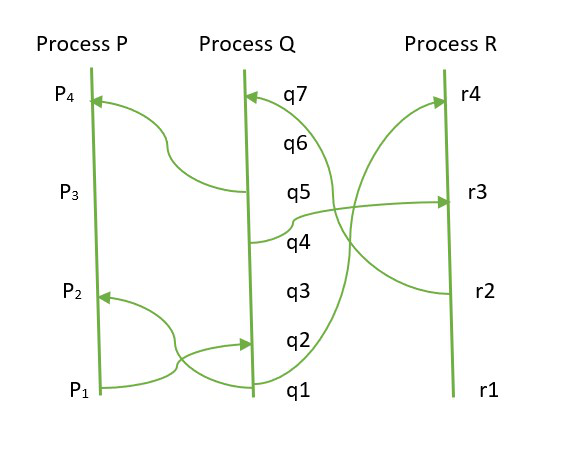 A logical clock is a way of assigning a number to an event where that number can be thought of as the time at which the event occurred and the notation we use here is Ci<a> of an event a, where C is used to denote Clock. These numbers are purely logical they do not have any relationship to physical time

So given these conditions, We define a clock function within a process by simply incrementing the process’s own clock as we go from event to event i.e.; Each process Pi increments Ci between any two successive events.

So, now we have a partial ordering of the events within a distributed system and we have a way to assign numbers to those events such that we can construct logical clocks out of them.