Introduction :
A polygon may be represented as a number of line segments connected, end to from a closed figure.
Polygons can be represented in two ways –
(i) outline from using move commands and
(ii) as a solid objects by setting the pixels high inside the polygon including pixels on the boundary.

To determine a point lies inside a polygon or not, in computer graphics, we have two methods :
(a) Even-Odd method (odd-parity rule)
(b) Winding number Method-Inside

Even-Odd method :
Constructing a line segment between the point (P) to be examined and a known point outside the polygon is the one way to determine a point lies inside a polygon or not. The number of times the line segment intersects the polygon boundary is then counted. The point (P) is an internal point if the number of polygon edges intersected by this line is odd; otherwise, the point is an external point. 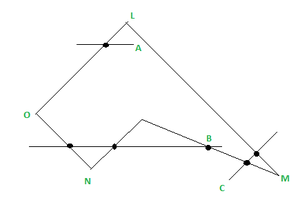 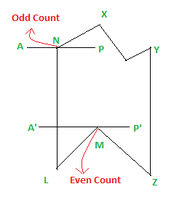 Winding Number Method :
There is another alternative method for defining a polygons’ interior point is called the winding number method. Conceptually, one can stretch a piece of elastic between the point (P) to be checked and the point on the polygon boundary.
Treat that, elastic is tied to point (P) to be checked firmly and the other end of the elastic is sliding along the boundary of the polygon until it has made one complete circuit. Then we check that how many times the elastic has been wound around the point of intersection. If it is wound at-least once, point is inside. If there is no net winding then point is outside.

In this method, instead of just counting the intersections, we give each boundary line crossed a direction number, and we sum these directions numbers. The direction number indicates the direction of the polygon edge was drawn relative to the line segment we constructed for the test.

Example : To test a point (xi, yi), let us consider a horizontal line segment y = yi which runs from outside the polygon to (xi, yi). We find all the sides which crossed this line segment.
Now there are 2 ways for side to cross, the side could be drawn starting below end, cross it and end above the line. In this case we can give direction numbers – 1, to the side or the edge could start above the line & finish below it in this case, given a direction 1. The sum of the direction numbers for the sides that cross the constructed horizontal line segment yield the “Winding Number” for the point. 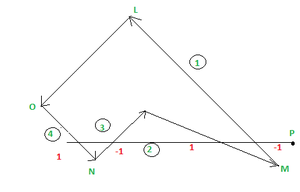