Cell is the fundamental and structural unit of all living entity. It is the  biological, structural, and functional unit of all plants and animals. cells are the ‘Building Blocks of Life’ or the ‘Basic units of Life’. Organisms made up of a single cell are ‘unicellular’ whereas organisms made up of many cells are ‘multicellular’. Cells perform many different functions within a living organism such as digestion, respiration, reproduction, so on. cells give rise to a tissue → multiple tissues make up an organ → many organs create an organ system → several organs systems functioning together make up the human body.

1838, a German botanist, Matthias Schleiden was quick to express that cells are the structure blocks, everything being equal. In the next year, another German botanist, Theodor Schwann expressed that cells are the crucial units of animals as well. These assertions finished the idea that plants and creatures have fundamental differences of structure.

Their discoveries led the detailing of the ‘Cell Theory’. Cell Theory expresses that cells are the essential units of every single living organic entity. Yet, the cell hypothesis neglected to make sense of how new cells emerge. In 1855, Rudolf Virchow, a German physiologist expressed in German ‘Omnis cellula e cellula’ which implies that new cells come from previously existing cells.

Among prokaryotes, microbes are the most well-known and increase extremely quick. They are single-celled and range in size from 0.2 to 10 microns (multiple times less than most plant and creature cells). Microscopic organisms are found all over the place – in rocks, soil, sea water

They provide structure for the body, use in nutrients from food to convert the nutrients into energy, and carry out specialized functions. Cells also consist the body’s hereditary material(genetic material)and can make copies of themselves. 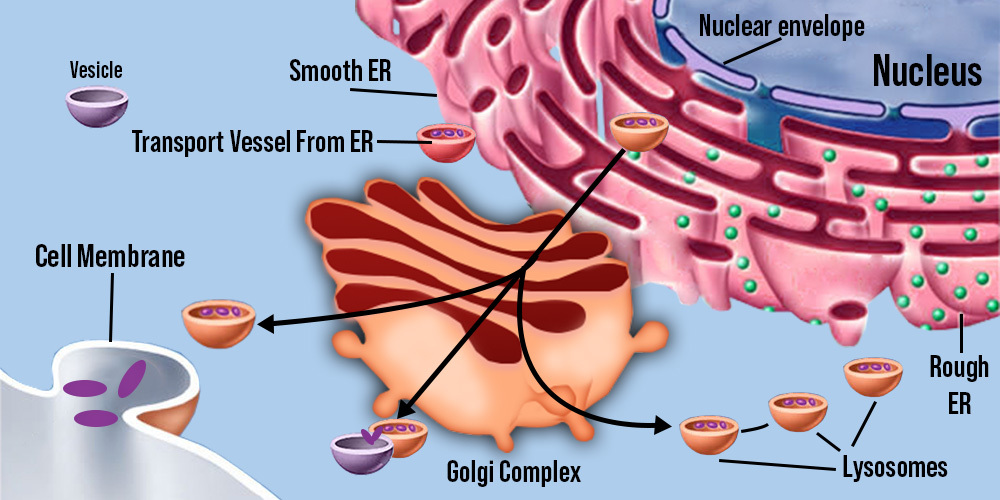 Endoplasmic reticulum is a membranous structure which forms significant part  of the endomembrane arrangement of the Eukaryotic cell that separate the intracellular space into luminal  and additional luminal (cytoplasm) compartments.

It is a single membrane-bound organelle that forms a part of the endomembrane system. Golgi complex is mainly found in the cytosol of the eukaryotic cells  membrane sacs known as cisternae. A Golgi stack  contains 4-8 cisternae. Each Golgi stack has two faces- the cis face and the trans face. Both faces are also called the entry face and exit face, respectively. The main functions of the Golgi apparatus include protein packaging and secretion.

It is a single membrane enclosed  organelle that contains hydrolytic catalysts that are responsible for the breakdown of different biomolecules. These hydrolytic proteins incorporate nucleases, proteases, lipases, glycosidases, phosphatase, phospholipases, and sulphatases. For ideal action, the chemical requires an acidic climate inside the lysosomes with a pH of around 5.0. There stays present a proton siphon inside the lysosomal layer. This proton siphon ships the proton from inside the film involving ATP as a wellspring of energy. Lysosomes are liable for the absorption of both intracellular as well as extracellular materials as they can separate infection particles or microbes in the phagocytosis of macrophages.

A vacuole is a   membrane bound structure tracked down in the cytoplasmic membrane of a cell. The membrane encoded the vacuole is known as tonoplast. The components of the vacuole, known as the cell sap, differ from that of the surrounding cytoplasm. The layers are made out of phospholipids. The layers are implanted with proteins that help in transportation of molecule across the membrane. Various combination of these proteins assist the vacuoles with holding various materials.

Question 1: What is called the endomembrane system?

The endomembrane system endo- = “within. a group of membranes and organelles in eukaryotic cells that works together to change, package, and transportation of lipids and proteins.

The endomembrane system was first found in the late of the 1800s when researcher Camillo Golgi saw that a specific stain specifically marked just a few inside cell layers.

Question 3: Write the 3 parts of the endomembrane system?

The 3 parts of endomembrane system is Golgi apparatus, vacuoles, and cytoplasmic vesicles.

Question 4: What is the role of  endomembrane system?

The endomembrane system permits different elements of the eukaryotic cell to be compartmentalized (e.g., protein corruption happens in the lysosome), permitting a more significant level of cell specialization. The system depends on unique cooperations between various compartments, worked with by vesicle dealing between them.

Question 5: Who discovered the cell?

Rober hook discovered the cell in the year 1665.