An Encoder is a combinational circuit that performs the reverse operation of Decoder.It has maximum of 2^n input lines and ‘n’ output lines, hence it encodes the information from 2^n inputs into an n-bit code. It will produce a binary code equivalent to the input, which is active High. Therefore, the encoder encodes 2^n input lines with ‘n’ bits.

The Truth table of 4 to 2 encoder is as follows : 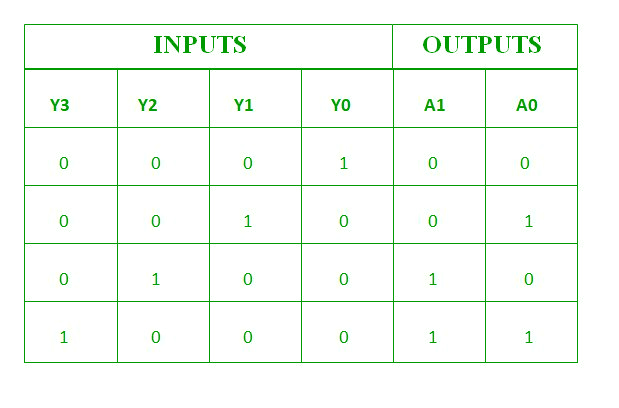 Logical expression for A1 and A0 :

The above two Boolean functions A1 and A0 can be implemented using two input OR gates :

The 8 to 3 Encoder or octal to Binary encoder consists of 8 inputs : Y7 to Y0 and 3 outputs : A2, A1 & A0. Each input line corresponds to each octal digit and three outputs generate corresponding binary code.

The figure below shows the logic symbol of octal to binary encoder:

The truth table for 8 to 3 encoder is as follows : 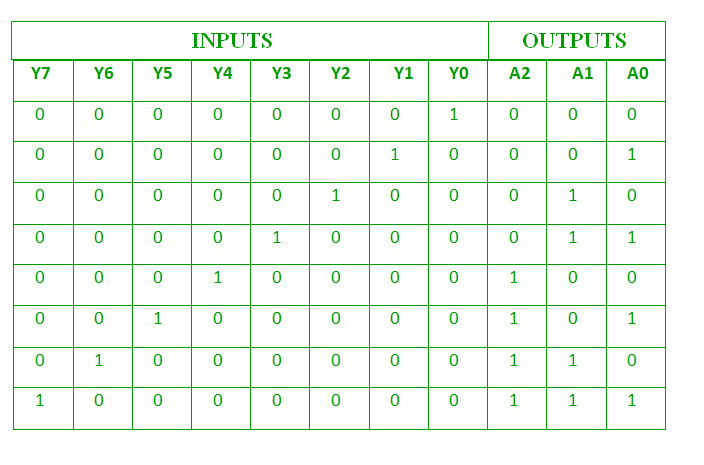 The above two Boolean functions A2, A1 and A0 can be implemented using four input OR gates : 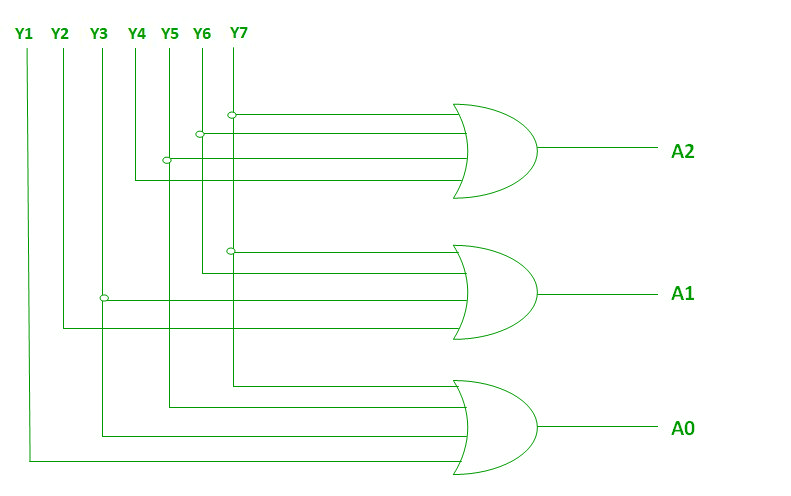 The decimal to binary encoder usually consists of 10 input lines and 4 output lines. Each input line corresponds to the each decimal digit and 4 outputs correspond to the BCD code. This encoder accepts the decoded decimal data as an input and encodes it to the BCD output which is available on the output lines. The figure below shows the logic symbol of decimal to BCD encoder :

The truth table for decimal to BCD encoder is as follows: 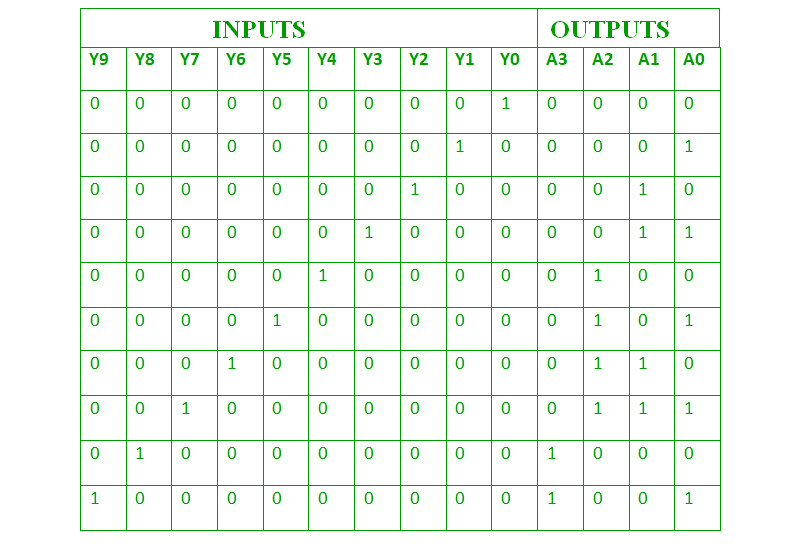 The above two Boolean functions can be implemented using OR gates : 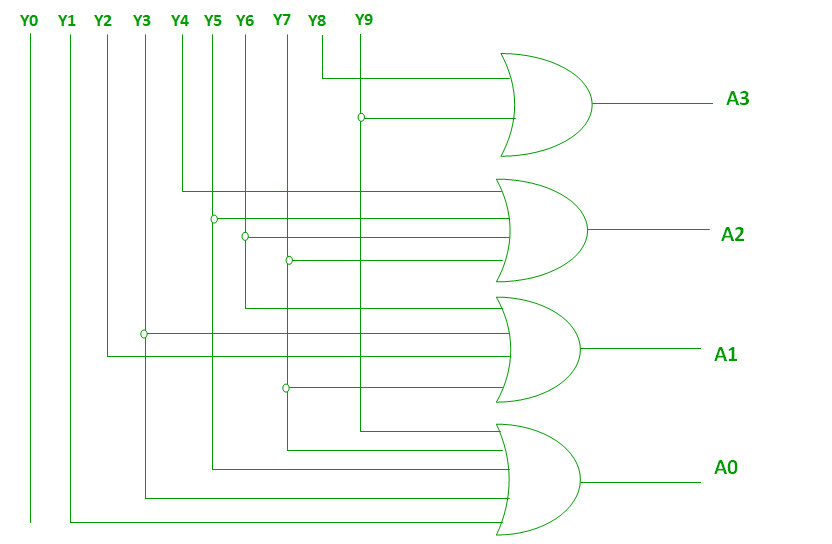 A 4 to 2 priority encoder has 4 inputs : Y3, Y2, Y1 & Y0 and 2 outputs : A1 & A0. Here, the input, Y3 has the highest priority, whereas the input, Y0 has the lowest priority. In this case, even if more than one input is ‘1’ at the same time, the output will be the (binary) code corresponding to the input, which is having higher priority.

The truth table for priority encoder is as follows : 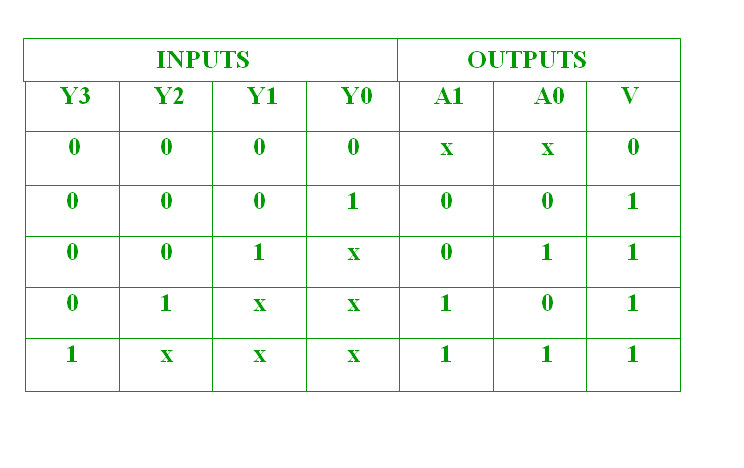 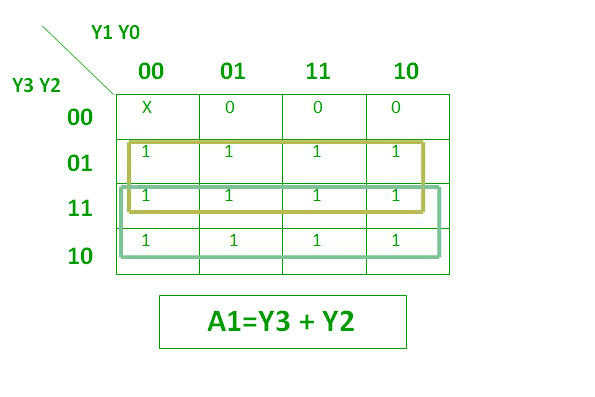 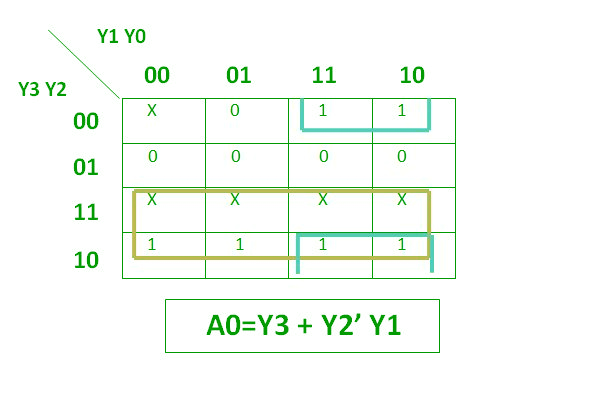 The above two Boolean functions can be implemented as : 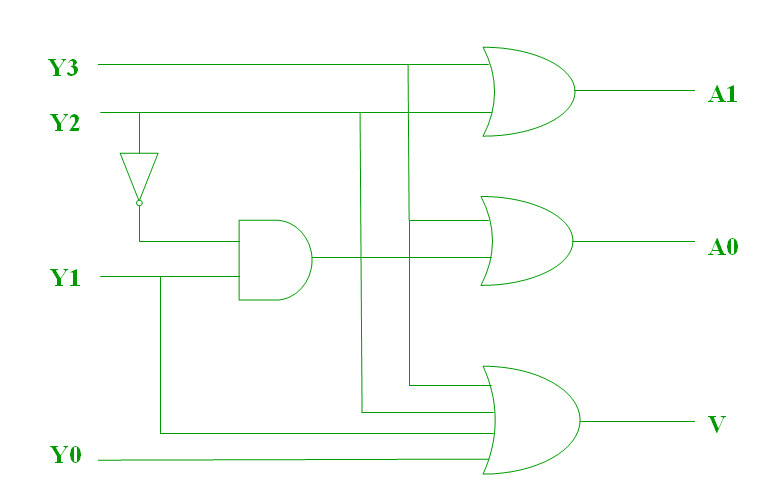 So, to overcome these difficulties, we should assign priorities to each input of encoder. Then, the output of encoder will be the ( code corresponding to the active High inputs, which has higher priority.