Encapsulation is defined as the wrapping up of data under a single unit. It is the mechanism that binds together code and the data it manipulates. In a different way, encapsulation is a protective shield that prevents the data from being accessed by the code outside this shield. 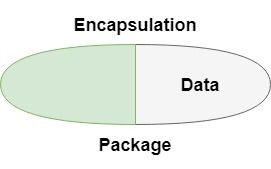 In object-oriented languages, the variables or data of a class are hidden from any other class and can be accessed only through any member function of own class in which they are declared. But Go language does not support classes and objects. So, in the Go language, encapsulation is achieved by using packages. Go provides two different types of identifiers, i.e. exported and unexported identifiers. Encapsulation is achieved by exported elements(variables, functions, methods, fields, structures) from the packages, it helps to control the visibility of the elements(variables, functions, methods, fields, structures). The elements are visible if the package in which they are defined is available in your program.

Explanation: In the above example, we convert the case of the elements of the slc slice to uppercase by exporting ToUpper() function from strings package.

So, this process(exporting of variables, fields, methods, functions, structures) is known as encapsulation. Due to encapsulation we only export the name of the function not the whole definition of the function in our program and the definition of the ToUpper() function is wrapped inside strings package, so for exporting ToUpper() function first you need to import strings package in your program.

2. Unexported Identifiers: Unexported identifiers are those identifiers which are not exported from any package. They are always in lowercase. As shown in the below example addition function is not related to any package, so it is an unexported function and the visibility of this method is limited to this program only.