In the field of graph theory, various shortest path algorithms especially Dijkstra’s algorithm and Bellmann-Ford’s algorithm repeatedly employ the use of the technique called Edge Relaxation.

The idea of relaxation is the same in both algorithms and it is by understanding, the ‘Relaxation property‘ we can fully grasp the working of the two algorithms.

The Edge Relaxation property is defined as the operation of relaxing an edge u → v by checking whether the best-known way from S(source) to v is to go from S → v or by going through the edge u → v. If it is the latter case we update the path to this minimum cost.

Initially, the reaching cost from S to v is set infinite(∞) and the cost of reaching from S to S is zero. 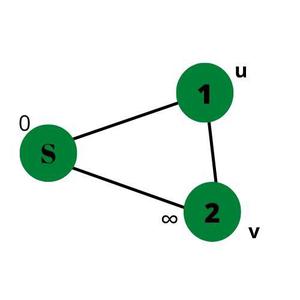 Representing the cost of a relaxed edge v mathematically,

And the basic algorithm for Relaxation will be :

where d[u] represents the reaching cost from S to u 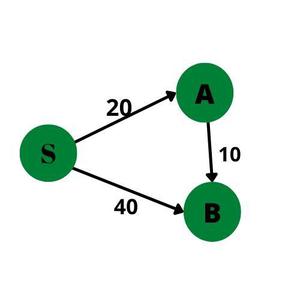 Also, initially, the distance between other vertices and S will be infinite.

for each vertex v in the graph 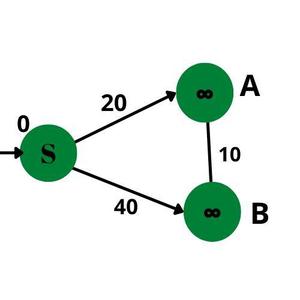 Now we start relaxing A.

The shortest path from vertex S to vertex A is a single path ‘S → A’. 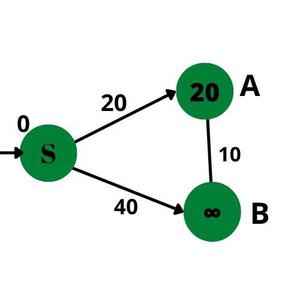 Graph after relaxing A

Now we relax vertex B.

The process remains the same the only difference we observe is that there are two paths leading to B.

Since its a lower value than the previous initialized d[v] is updated to 40, but we will now proceed to checking path II as per the greedy method approach.

Since the new d[v] has a lower cost than the previous of case I we again update it to the new obtained by taking path II. We cannot update the d value to any lower than this, so we finish the edge relaxation. 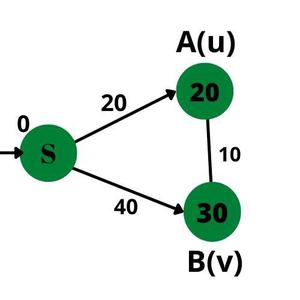 Ultimately we get the minimum cost to reach each other vertices in the graph from the source and hence solving the single source shortest path problem.

Finally, we can conclude that the algorithms for the shortest path problems (Dijkstra’s Algorithm and Bellman-Ford Algorithm) can be solved by repeatedly using edge relaxation.

Previous
Count of Disjoint Groups by grouping points that are at most K distance apart
Next
What is Peterson Graph?
Related Articles
1. Bellman Ford Algorithm (Simple Implementation)
2. Bellman–Ford Algorithm | DP-23
3. Minimum Cost Maximum Flow from a Graph using Bellman Ford Algorithm
4. Difference between Tree edge and Back edge in graph
5. Detect a negative cycle in a Graph | (Bellman Ford)
6. Shortest path from source to destination such that edge weights along path are alternatively increasing and decreasing
7. Add and Remove Edge in Adjacency List representation of a Graph
8. Add and Remove Edge in Adjacency Matrix representation of a Graph
9. Tree, Back, Edge and Cross Edges in DFS of Graph
10. Maximum cost path in an Undirected Graph such that no edge is visited twice in a row
Article Contributed By :