An environment creates and balances out through the course of biological progression. It is a course of progress in the species’ construction of a biological local area over the long run from a pioneer community that sets first in a desolate land to the climax community. Biologists have major areas of strength in understanding how communities structure and change over the long run. Truth be told, they have invested a ton of energy seeing how complex communities, similar to woods, emerge from void land or exposed rock. They study, for instance, destinations where volcanic ejections, ice sheet retreats, or fierce blazes have occurred, clearing land or uncovering rock. In concentrating on these destinations over the long run, scientists have seen steady cycles of progress in ecological communities. Generally speaking, a local area emerging in an upset region goes through a progression of movements in piece, frequently throughout numerous years. This series of changes is called ecological succession.

Ecological Succession is a series of changes in an ecological system over a time period.

It can also describe as the sequence of species colonization of an ecosystem from vacant or infertile land. Ecological succession is an extremely essential kind of development and improvement of an advancing biological ecosystem all in all. It likewise guarantees new regions are colonized, and decayed biological systems are recolonized so the life forms can undoubtedly adjust to the consistent changes in the climate and keep on enduring great.

The slow and moderate development of living organisms in some random region concerning its changing environmental elements, and ecological succession. An expected change observes the biotic parts being an unavoidable piece of them the climate. Ecological succession targets arriving at the balance in the environmental system. This is accomplished by a community called the climax community.  To achieve this mark of harmony steady change in the number of species is noticed. The region where the community goes through a particular change is called sere. All communities around us have gone through environmental progression since their reality was distinguished. Development in this manner is an at the same time happening process alongside ecological succession. 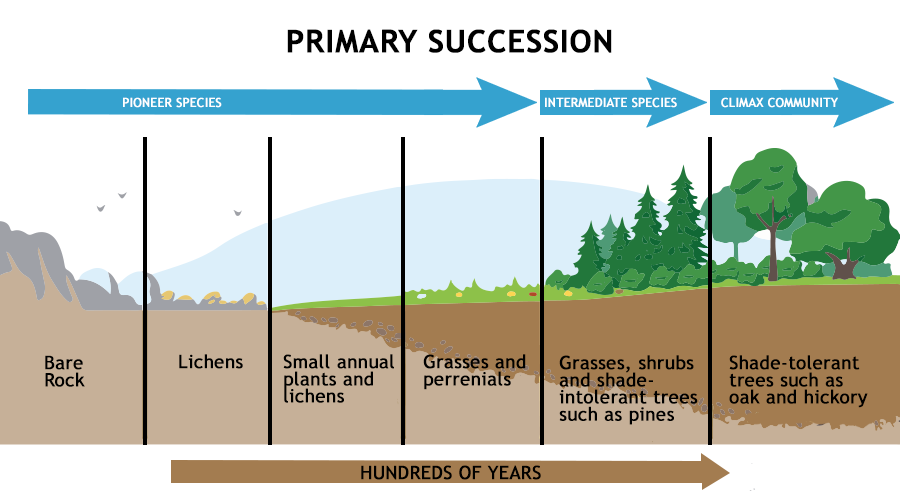 It begins in a vacant region, never having vegetation of any kind where no residing creature at any point existed. A few uncovered essential regions are the recently uncovered ocean bottom, molten rocks, sand ridges, newly cooled magma dregs, recently lowered regions, and so on. As there is no dirt, these stones were separated by microorganisms and disintegrated to frame the soil. This is a cycle called erosion. The soil then turns into the groundwork of vegetation. It for the most part takes a few hundred to 1,000 years for laying out a biotic local area relying on the base and the environment. These plants help various creatures and progress from the primary ecosystem to the climax community. At the point when the primary ecosystem is obliterated, secondary succession happens. 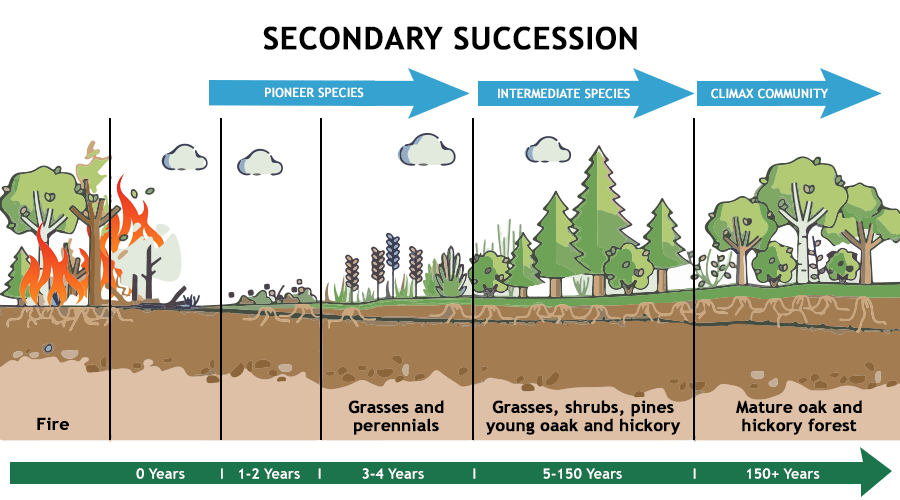 It begins in regions that in some way lost every one of the living organic entities that existed there. Since some dirt or dregs is available, progression is quicker. at the point when the essential biological system gets cleared out can happen because of woodland fire, overwhelmed lands, avalanches, seismic tremors, and so forth. Following such annihilation, the course of progression will happen in the future from the new natural circumstances. Little plants arise first, trailed by bigger plants. The tall trees block the daylight and change the structure of the creatures underneath the overhang. At last, the climax community comes right into it. It requires fifty to a hundred years to finish a meadow and hundreds to additional twofold years to foster a forest.

This happens in a community by changing the construction or structure of the biological system on a cyclic premise is called cyclic succession. There are a few plants that stay lethargic for the majority of the year, however, arise at the same time. This can cause primary varieties in the environment.

The ecological succession has the following characteristics:

A seral community is a transitional phase of ecological succession advancing toward the climax community. A sere, or seral community, is depicted as the movement of an ecological community development stages from the pioneers to the climax. The seral community is subbed by the succeeding community. It comprises food webs and established food chains. It displays an extremely low level of variety. The species are less in number and the supplements are additionally less. The various kinds of series are referenced beneath:

This interaction includes the accompanying stages, which are as per the following:

Development of vacant region with next to no type of life. It could be caused because of a few variables like volcanic ejections, avalanches, floods, disintegration, seismic tremor, woodland fire, the spread of illness, and so forth.

It is the effective foundation of animal categories in a barren region.

After aggregation, the number of animal groups competes with different other species for food, space, and different assets. The intraspecific and interspecific contest happens alongside collaboration with the climate. New intrusion by plants and creatures happens.

The alteration of the climate through the impact of living creatures on it is called response.

The stage at which the last or peak local area turns out to be pretty much balanced out for a more drawn-out time frame in that specific climate is known as stabilization.

The reasons for environmental progression are fundamentally three sorts. These are as per the following:

The examples of ecological succession are as follows:

Question 1: Why Ecological Succession is important?

The importance of ecological succession is as follows:

Question 2: What are the different types of successional communities?

There are three principal kinds of successional communities:

Question 3: What is sere and its types?

The entire series of communities occurring in biotic succession is called sere. A seral community is a transitional phase of ecological succession advancing toward the climax community. A sere, or seral community, is depicted as the movement of an ecological community development stages from the pioneers to the climax. It consists of simple food chains and food webs. The different types of series are mentioned below:

Here is the difference between the primary and secondary successions:

Question 5: What are the different stages in Ecological Succession?

The stages are the mechanism involved in the process of ecological succession are as follow:

Question 6: What is autogenic and allogenic succession?

Question 7: Give a real incident of Ecological Succession.

The volcanic island of Surtsey is situated off the shore of Iceland. In 1963, this island was shaped because of the emissions of the spring of gushing lava. After the ejection, the ground was principally shaking. Organisms and shapes began developing on the stone. These started to separate the stone to shape soil. Then the little grasses start to flourish and begin to develop. Following more modest bushes start to develop. The little tunneling creatures moved in to upset the dirt as bigger plants developed. Following quite a long while, trees start to flourish and develop where there was just stone.