An ecological pyramid is also integral to a biological ecosystem. In 1939, Charles Elton previously presented the idea of the ecological pyramid. An ecological pyramid is a graphical portrayal of the dispersion of biomass or energy inside an ecosystem. The biomass is disseminated by the number of individual creatures at each trophic level. Each step or level of the order of the food chain frames a trophic level. Ecological pyramids conformed to the trophic construction of the ecosystem. The pyramid in the biological system comprises various layers starting from the earliest stage to the top. The autotrophs or the producers are at the main trophic level. They fix up the sun-powered energy and make it accessible for heterotrophs or consumers. The herbivores or the primary consumers come at the second, little carnivores or the secondary consumers at the third, and bigger carnivores or the tertiary consumers structure the fourth trophic level. Taking a gander at the trophic levels from the beginning to the highest point of the pyramid, it is seen that the quantity of life forms in each trophic level is a step by step diminishing. The foundation of the pyramid is shaped by the producers and the progressive supplement layers ascend to the top. At long last, the apex predators are the greatest top consumers.

The graphical portrayal of the connection between different living creatures at different trophic levels inside a food chain is called an ecological pyramid. The pyramid is framed based on the number of creatures, energy, and biomass, and very much like the name recommends, these are shaped as a pyramid. The various kinds of ecological pyramids depend on how much energy or biomass is accessible to each trophic level. 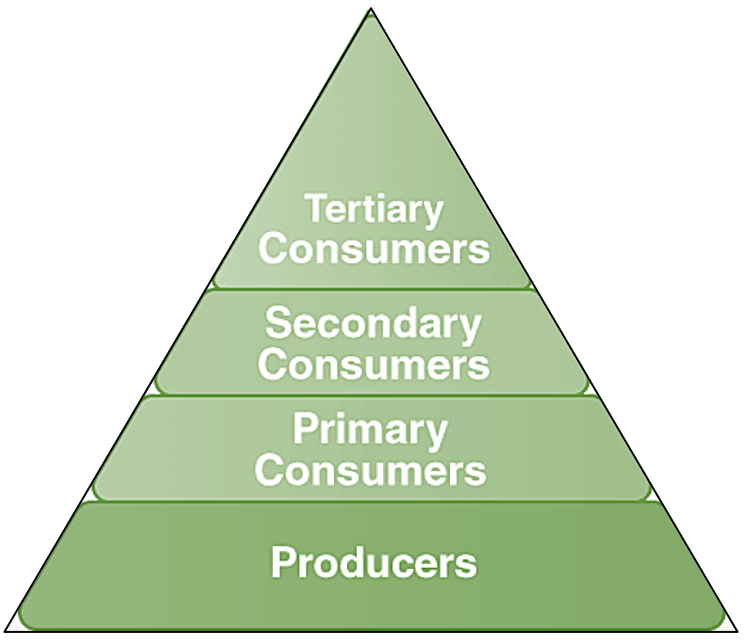 Features of the Ecological pyramid

The ecological pyramid is mainly divided into three parts.

The ecological pyramid that is shaped by organizing the number of living creatures of various supplement levels in an ecological system is known as the pyramid of numbers. The producers are situated on the foundation of the pyramid. 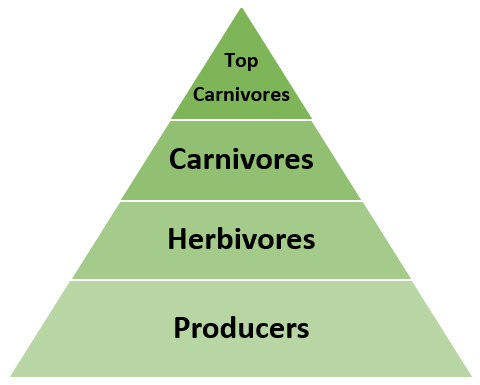 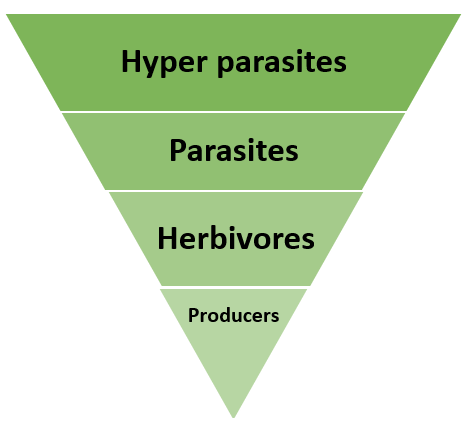 The ecological pyramid that is framed by sequencing how much dry weight of various creatures as per the trophic level in an ecological system is known as a pyramid of biomass. Contingent upon the trophic level of an environment, the dry weight of various living creatures is organized in stages, with 15 to 20% of biomass per layer going to the following layer. 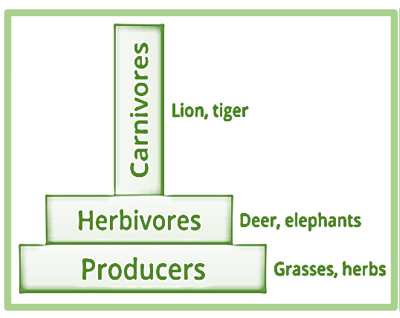 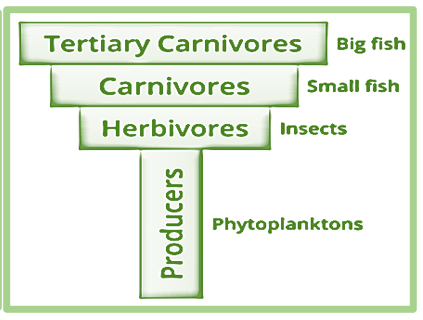 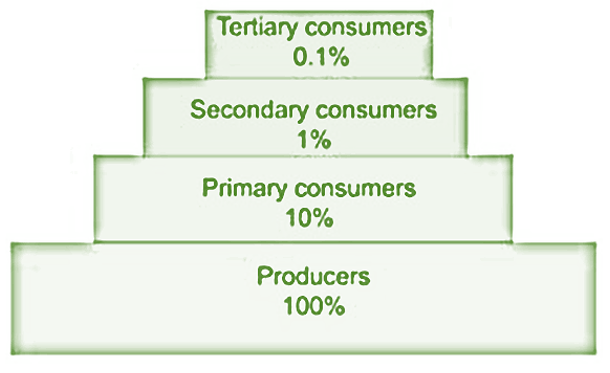 The pyramid of energy is generally upstanding. This pyramid addresses the complete energy content of each trophic level in an ecological system. The foundation of this pyramid has the most measure of energy acquired from the sun. Yet, as indicated by Lindeman’s 10% regulation law, how much energy at a higher level steadily diminishes. A portion of the energy that is found in natural food is lost as heat energy in breath, some are utilized in physiological cycles, and the rest is utilized by decomposers. In the pyramid of energy, some energy is lost as energy is moved starting with one trophic level and then onto the next. Each level of this pyramid loses 60 to 90% of energy during energy moves.

The ecological pyramid is important in a biological system and the reasons made sense underneath:

The ecological pyramid accompanies its own arrangement of constraints since it neglects several significant viewpoints. These have been talked about underneath:

Question 1: What is Ecological Succession?

Question 2: What is a Food chain?

A food chain is a linear sequence of creatures through which supplements and energy pass as one eats another. We should take a look at the levels of a common food chain order, beginning from the base, the producers to moving top. These food chains are then associated with making a food web. Trophic levels are the various layers inside a food web and consider the exchange of energy, including producers, primary consumers, secondary consumers, and tertiary consumers.

Question 3: What is Food Web?

The food web definition in science is a chart portrayal or diagram that shows the exchange of energy through numerous various creatures in a region. Food webs are made of numerous food chains, which show the exchange of energy between one creature at each trophic level. Food webs can likewise help us study and make sense of how the variety of species is connected with how they fit inside the general food system. They may likewise uncover basic data about the connections between intrusive species and those local to a specific environment.

Question 4: What is Biomass?

Biomass is all the weight or mass of an animal at a given time in a trophic level of an ecological system. It is determined in two ways-wet biomass and dry biomass. In a biological ecosystem, some the biomass diminishes from producer to the last top apex predator of the pyramid. A biomass pyramid is a graph that looks at the biomass of various trophic levels inside a biological system.

In 1942, Raymond Lindeman presented a hypothesis called 10% regulation to make sense of the exchange of energy. As per Lindeman, 10% of energy streams start with one trophic level and then onto the next trophic level in an ecological system. This is Lindeman’s 10% regulation. For instance, on the off chance that a bunny eats a 1000 gm of green plants, 10% or 100 gm of energy from that food is utilized for different physiological capabilities and body heat creation in the body of the hare. On the off chance that a falcon eats the hare, just 10 gm of energy will be moved to the bird of prey’s body, as per Lindeman’s 10% regulations.

Question 6: Why the Pyramid of numbers is inverted?

In any environment, the Ecological pyramid shows information from base to top. Yet, the pyramid of numbers in the parasitic food chain is inverted. Since more than one parasitic creature might be reliant upon a tree. Numerous minuscule parasites might be reliant upon every one of them. So, from the foundation of this kind of pyramid to the pinnacle, the number of living beings progressively increments at various trophic levels. This condition is known as the difference in the ecological pyramid.

Question 7: What are the types of the food chain?

In nature, the food chain is framed based on energy transmission and food-consumer connections.