A Django model is the built-in feature that Django uses to create tables, their fields, and various constraints. In short, Django Models is the SQL of Database one uses with Django. SQL (Structured Query Language) is complex and involves a lot of different queries for creating, deleting, updating or any other stuff related to database. Django models simplify the tasks and organize tables into models. Generally, each model maps to a single database table.
This article revolves about how one can use Django models to store data in the database conveniently. Moreover, we can use admin panel of Django to create, update, delete or retrieve fields of a model and various similar operations. Django models provide simplicity, consistency, version control and advanced metadata handling. Basics of a model include –


This program defines a Django model called “GeeksModel” which has two fields: “title” and “description”. “title” is a character field with a maximum length of 200 characters and “description” is a text field with no maximum length. This model can be used to create and interact with a corresponding database table for storing “GeeksModel” objects. Without any additional code or context, running this program will not produce any visible output.

Django maps the fields defined in Django models into table fields of the database as shown below. 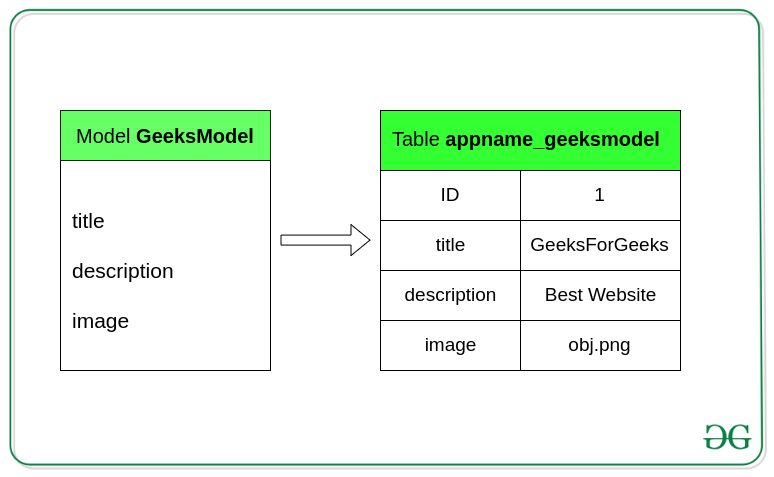 To use Django Models, one needs to have a project and an app working in it. After you start an app you can create models in app/models.py. Before starting to use a model let’s check how to start a project and create an app named geeks.py

To create a model, in geeks/models.py Enter the code,


This code defines a new Django model called “GeeksModel” which has four fields: “title” (a character field with a maximum length of 200), “description” (a text field), “last_modified” (a date and time field that automatically sets the date and time of creation), and “img” (an image field that will be uploaded to a directory called “images”). The __str__ method is also defined to return the title of the instance of the model when the model is printed.
This code does not produce any output. It is defining a model class which can be used to create database tables and store data in Django.

creates the table in the database.
Now we have created a model we can perform various operations such as creating a Row for the table or in terms of Django Creating an instance of Model. To know more visit – Django Basic App Model – Makemigrations and Migrate

To render a model in Django admin, we need to modify app/admin.py. Go to admin.py in geeks app and enter the following code. Import the corresponding model from models.py and register it to the admin interface.

This code does not produce any output, it simply registers the GeeksModel with the admin site, so that it can be managed via the Django admin interface.

Now we can check whether the model has been rendered in Django Admin. Django Admin Interface can be used to graphically implement CRUD (Create, Retrieve, Update, Delete).

Django lets us interact with its database models, i.e. add, delete, modify and query objects, using a database-abstraction API called ORM(Object Relational Mapper). We can access the Django ORM by running the following command inside our project directory.

Adding objects.
To create an object of model Album and save it into the database, we need to write the following command:

Retrieving objects
To retrieve all the objects of a model, we write the following command:

Deleting objects
To delete a single object, we need to write the following commands:

Validation on Fields in a Model


After running makemigrations and migrate on Django and rendering above model, let us try to create an instance using string “GfG is Best“. 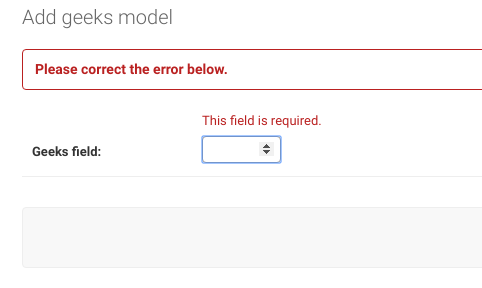 You can see in the admin interface, one can not enter a string in an IntegerField. Similarly every field has its own validations. To know more about validations visit, Built-in Field Validations – Django Models

The most important part of a model and the only required part of a model is the list of database fields it defines. Fields are specified by class attributes. Here is a list of all Field types used in Django.

Django also defines a set of fields that represent relations.

Field Options are the arguments given to each field for applying some constraint or imparting a particular characteristic to a particular Field. For example, adding an argument null = True to CharField will enable it to store empty values for that table in relational database.
Here are the field options and attributes that an CharField can use.