When one creates a Form class, the most important part is defining the fields of the form. Each field has custom validation logic, along with a few other hooks. This article revolves around various fields one can use in a form along with various features and techniques concerned with Django Forms. Forms are basically used for taking input from the user in some manner and using that information for logical operations on databases. For example, Registering a user by taking input as his name, email, password, etc. 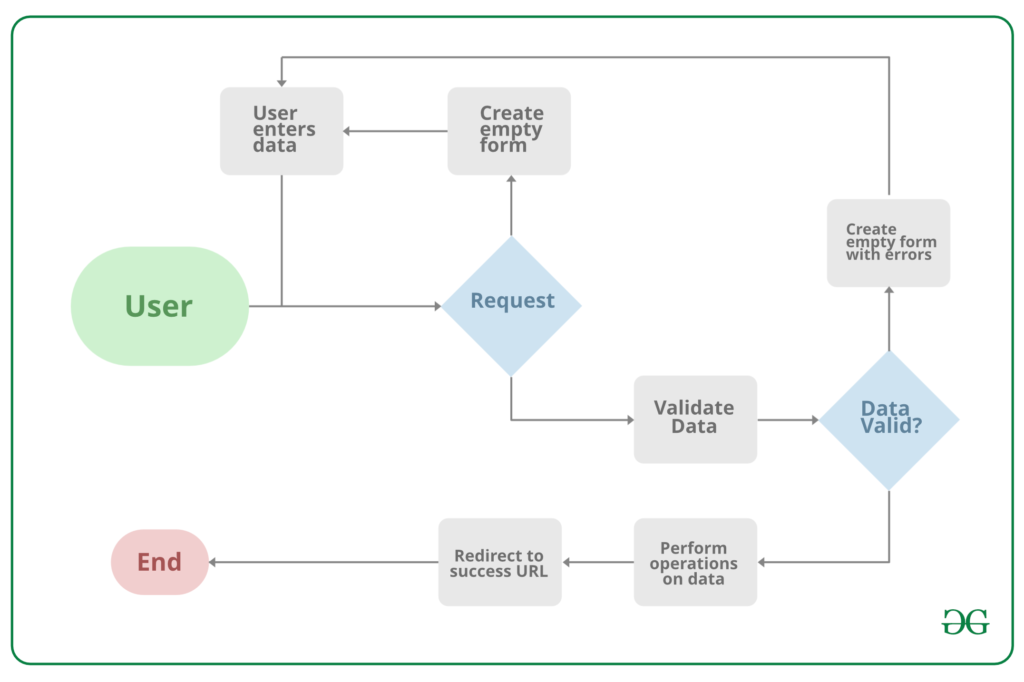 Note that all types of work done by Django forms can be done with advanced HTML stuff, but Django makes it easier and efficient especially the validation part. Once you get hold of Django forms you will just forget about HTML forms.

Syntax :  Django Fields work like Django Model Fields and have the syntax:

To use Django Forms, one needs to have a project and an app working in it. After you start an app you can create a form in app/forms.py. Before starting to use a form let’s check how to start a project and implement Django Forms.

Creating a form in Django is completely similar to creating a model, one needs to specify what fields would exist in the form and of what type. For example, to input, a registration form one might need First Name (CharField), Roll Number (IntegerField), and so on.

To create a form, in geeks/forms.py Enter the code,

Django form fields have several built-in methods to ease the work of the developer but sometimes one needs to implement things manually for customizing User Interface(UI). A form comes with 3 in-built methods that can be used to render Django form fields.

To render this form into a view, move to views.py and create a home_view as below.


In view, one needs to just create an instance of the form class created above in forms.py. Now let’s edit templates > home.html

.
To check how to use the data rendered by Django Forms visit Render Django Form Fields

Django ModelForm is a class that is used to directly convert a model into a Django form. If you’re building a database-driven app, chances are you’ll have forms that map closely to Django models. Now when we have our project ready, create a model in geeks/models.py,


To create a form directly for this model, dive into geeks/forms.py and Enter the following code:

The most important part of a form and the only required part is the list of fields it defines. Fields are specified by class attributes. Here is a list of all Form Field types used in Django

Core Field arguments are the arguments given to each field for applying some constraint or imparting a particular characteristic to a particular Field. For example, adding an argument required = False to CharField will enable it to be left blank by the user. Each Field class constructor takes at least these arguments. Some Field classes take additional, field-specific arguments, but the following should always be accepted: